Nothing short of fantastic. 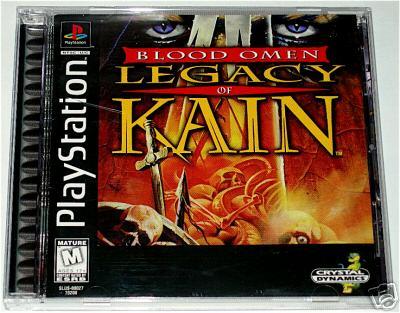 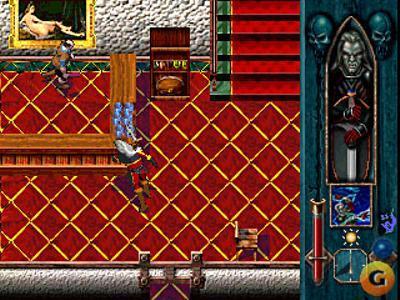 The only place this game falls short. The FMVs are breathtaking, and if it weren't for them, the graphics would have a 5 or a 6. The in-game graphics aren't bad, but they aren't that good either. The graphics remind me of a good SNES game. The one complaint is the darkness, but that's what the light spell is for, isn't it?

This is where Blood Omen shines. Kain has five different forms (Vampire, Wolf, Bat, Commoner Disguise, and Mist Cloud) and there are well over twenty gruesome spells and items, including implode, lightning blast, and blood gout.

There are several different weapons and armors as well as plenty (170) of enemies. The world map is huge, one of the largest maps ever, and it's not hard to travel thanks to the bat form. Enemies aren't overly difficult or easy to kill. There are nearly 100 hours of gameplay and 100 secrets for some replay value.
The puzzles are not extremely difficult either. This game is simply a brilliant story with interaction.

Blood Omen was one of the first, if not the first, to have voices present the story, and not just say ''Wah!'' or ''Die!'' or ''Come on!'' and other short outbursts. This game has a few hours of dialogue that, not only is voiced very well , but is presented in a way that goes only with the game perfectly. It's great to here Kain when you get something new, like the item implode, ''Of all the items I use on my enemies, this is perhaps the cruelest...'' Like I said before, it's practically an interactive movie, and a good one to boot.

Not too much replay value here. Really the only thing to do is to get all the secrets, but it is an extremely fun and cool game so, who knows, one rainy afternoon you might just want to play it again.

Just because this game is made by a different group than Soul Reaver does not mean that it's not as good, in fact this game is just as good if not better. Sure, the graphics are a little shaky, but you can't always have everything and they don't hinder gameplay. If you have Soul Reaver, you need to get this game, it adds so much. Even if you don't have Soul Reaver, buy it anyway. A great story and gameplay that revolutionized video games just can't be missed.
Review Page Hits: 0 today (238 total)
mediahook