A short fuse, but a satisfying blast 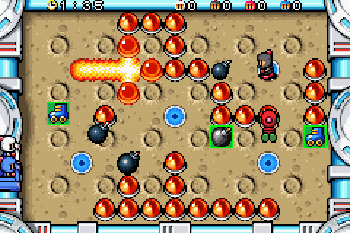 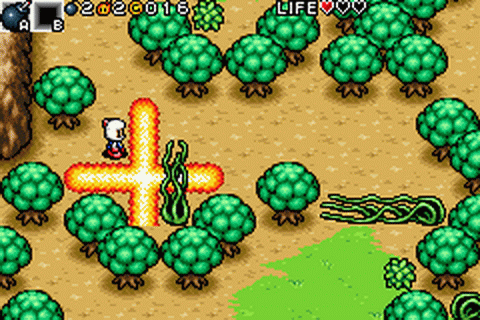 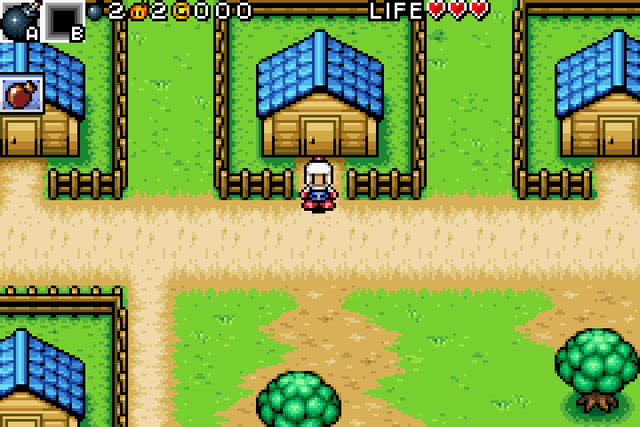 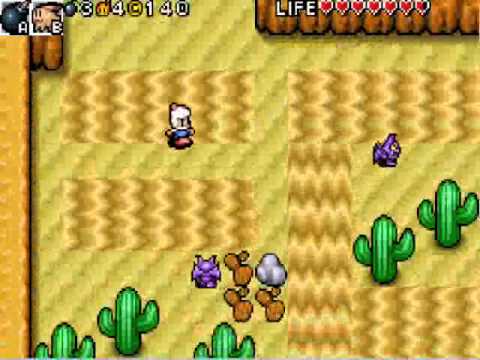 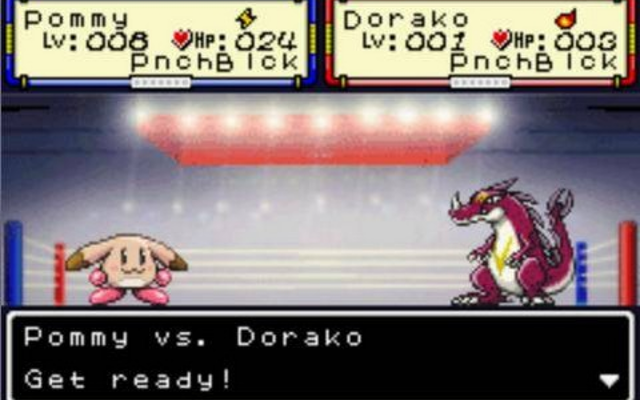 It's a common saying and sentiment that you don't know what you've got until it's gone. That's no truer than with Hudson Soft and its Bomberman franchise. Many of us certainly took for granted the series and thought it would always be there for us to enjoy. I mean, the series saw regular releases on a variety of platforms, often with more than one game on a given console or handheld. Now, Konami owns Bomberman, and the publisher has not done much to bring the White Bomber back into the gaming sphere. Thus, the only recourse is to play past Bomberman games, and that's exactly why I took my Game Boy Advance out of storage and played the very first Bomberman game to hit the system, Bomberman Tournament. Not just offering the traditional bomb-and-get-blasted multiplayer mayhem the series is well known for, but also a single player quest mode, Bomberman Tournament delivers explosive action in portable form.

The main attraction to Bomberman games is the multiplayer mode, and it is present and accounted for in Bomberman Tournament. If you possess a series of link cables, you can link up to four Game Boy Advances together to play Bomberman Tournament's bounty of multiplayer goodness. With eight arenas to choose from, you can bomb one another in an arena infested with killer landmines, an arena set on the moon containing portals that warp players across the map, or take one another out in a standard arena with no frills. You can play with just one cartridge between all players, but it's recommended that everyone involved in your bombing bonanza has a cartridge because of the otherwise nasty load times.

For those who don't know of the entertainment that the multiplayer of the Bomberman series delivers, it's all in how simple it is. You have four combatants on opposite corners of a small arena. Through planting bombs and destroying objects, you gain power-ups like being able to set more than one bomb at a time, extra firepower, or the ability to kick or throw bombs. The goal of a multiplayer match is to trap your opponent so they have no choice but to be obliterated by the blast radius of a given bomb. The last player standing wins the round.

Of course, if you lack multiple friends who own Game Boy Advances and link cables, you can always play Battle Mode with computer opponents, selecting one of three difficulty levels for them. The choices don't end there with rounds either, offering the ability to choose how long each round is, if there is a tiebreak rule involved, whether bombed players can seek revenge on living ones, and much more.

If the Battle Mode doesn't appeal to you as a solo player, you can always try out the Quest Mode, a single player excursion lasting about a dozen hours or so. What you get is a nice combination of Legend of Zelda field, dungeon, and town exploration, as well as some Pokemon-inspired monster collecting and battling.

The story is as follows: Bomberman is sent to planet Phantarion with information that it is under attack by the nefarious Brain Bomber. Along the way he'll encounter enemies both large and small, friendly faces, new power-ups to claim, dungeons rife with peril and puzzles, and multiple bosses to defeat.

Quest Mode's real drawback is something that is mitigated after the first couple of hours. You see, at the beginning of the mode, you have but three hearts to work with and an unimpressive number of bombs and firepower. This makes dying very easy, and since there is no auto-save feature in Bomberman Tournament, if you aren't saving every couple of minutes, you can lose a lot of progress. This is because losing all your health results in a game over, forcing you to restart from the last point you saved at.

Furthermore, enemies move around a lot. When you have just one bomb you can place on the map at a given time with such a low blast radius, it can be hard to take them out quickly. In fact, it can be maddening trying to defeat the simplest of foes at the beginning of the game.

Still, Quest Mode is an engaging experience. You get items and ability-granting Karabon monsters to make progress on planet Phantarion. The latter not only allows you to do things like dive underwater, cross small gaps, and see in the dark, but Karabons can also be used in battle. While these battles are nowhere near as deep as what you'd find in Pokemon (you select a karabon and three attack strategies before the battle even begins, and luck needs to be on your side), they are an enjoyable part of the Bomberman Tournament experience. Collecting all 25 is a fun task, as not all of the Karabons are necessary to beat the game.

When you're not traveling around the fields of Bomberman Tournament's Quest Mode, you'll be entering one of many puzzle-filled dungeons. These feel very much like The Legend of Zelda, complete with one screen-wide rooms, simple puzzles to solve such as hitting or bombing buttons to open locked doors, acquiring maps, finding treasure, and beating the boss at the end of the dungeon to acquire a heart to add to Bomberman's health.

Bomberman Tournament is a vibrant game with impressive character sprites and pleasant looking environments and objects. The amount of detail in the sprites is quite good, delivering a nice game to the eyes. The music is generally bright and cheery when you'd expect it to be, and suitably foreboding for boss fights and dungeons. What you have with Bomberman Tournament is a pleasing presentation package that does the Game Boy Advance hardware well.

If you're looking for a lesser-known Bomberman game that released close to the Game Boy Advance's launch, then Bomberman Tournament is a good pick. While the Quest Mode is slow to start off before things pick up, it's well worth trying out. The multiplayer mode is as big of a blast as any other in a Bomberman game. While Bomberman Tournament won't blow your mind, this game is certainly no dud.
Review Page Hits: 0 today (880 total)
mediahook