A time in my life I will look back on......and cry remorsefully for wasting it. 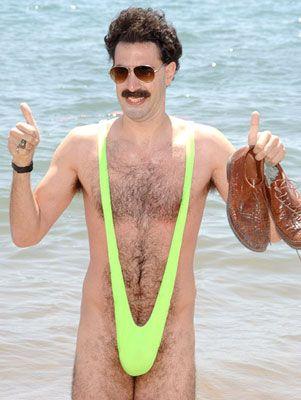 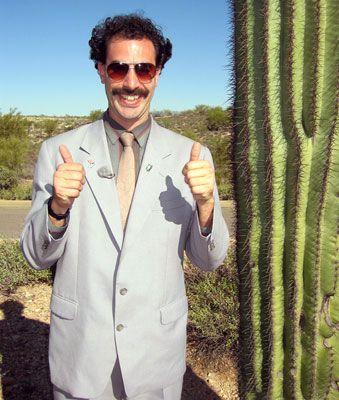 Ok, first off I tried watching this move at about 5 a.m. one day. After hearing very mixed things about it I decided to watch it. Let's just say I should have stuck with something that doesn't make me want to kill myself for wasting the brain cells to sit through it. The movie starts out with this guy Borat introducing himself and his country and city and what not. He also introduces his family, and I have to say his sister was hot; too bad she was not in anymore of the movie. So he sets off to America to try to bring back ideas for the country of Kazakhstan, and it flows as sort of a documentary of sorts.

Then once he gets to America, New York no less, he is offending people left and right. I have no problem with offending people, more power to him, but get a new routine; the whole let me kiss you thing got old after awhile. In his hotel room he sees Baywatch and falls in love with Pamela Anderson's character C.J. He talks his producer guy into going to California from New York. Along the way he gets stuck in a Jewish Bed & Breakfast, runs into a bunch of thugs in Atlanta, and finally some college frat guys on the way to California. One part of the movie I had to vomit from was the part when his fat producer friend Azamat is whacking off to Borat's Baywatch magazine. Borat walks out of the shower and there he is going to town on himself over Borat's supposed "love." So this starts a huge fight with Borat and Azamat who mind you are both naked, and I don't know about you but a 300 pound naked man, another naked man wrestling is more then enough to make me lose my lunch.

Overall the humor was dry, shallow minded, and quite sexist (again I don't care) which was funny once or twice, but it got tiring over and over again hearing the same sexist joke or the same Jew jokes over and over. If I were you I would steer clear of Borat unless someone gives it to you, and even then fast forward to the ending and chances are you wouldn't have missed much except a couple hours that you never wasted in the first place
Review Page Hits: 0 today (159 total)
mediahook