Save this game for the 32X or spend your quarters at the arcade. This version is mediocre. 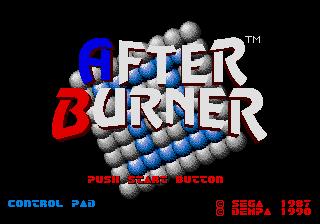 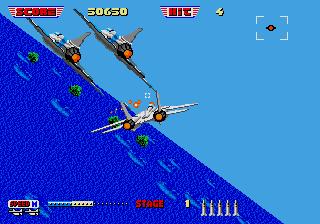 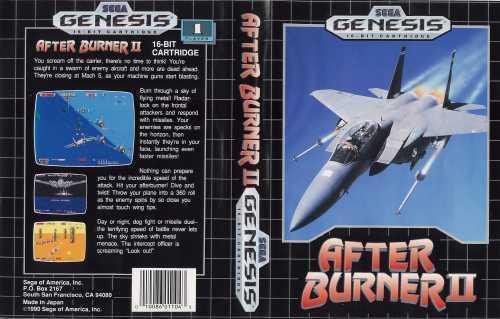 After Burner II is a mediocre port of the 1987 arcade game. The mediocrity is due to the graphics of the console port being very similar to the original version, but lousier animation and gameplay.

The sound effects are very well done. The voice that commands "fire!" when shooting missles does not sound muffled like most Genesis games. In-game music is good as well, but in a way is worse than the arcade version. The Genesis had some good tunes that came out of it, meaning the music could have been much better on this game.

The graphics themselves are not that bad. In fact, they are pretty close to the arcade version. This excludes the sloppy looking water and ground that looked so nice in the arcade and 32X versions. The sprites are nice and large like the superior versions. It still looks pretty good for a 1990 Genesis game despite the slight differences in graphics.

The worst aspect is the gameplay. The choppy animation is crazy because of the poor scaling abilites of the Genesis. The choppy animation shows that the planes at one moment are far away. The next moment, the planes are right in your face. In the superior versions, the animation is better. This makes it easier to see the locations that planes are moving to, which in turn will help when the enemy is firing missles at you because these missles travel fast. The game is pretty easy to learn once you get the hang of the controls. The game's overall pace seems even crazier than the 32X or arcade versions.

This game is somewhat fun, but the choppy animation and chaotic gameplay ruin this game. The only thing that I can say that is better than the arcade version is the automatic machine gun firing. It shoots automatically without having to use a seperate button to manually work the machine gun. You don't have to go to the options to do this.

There is a type of addictiveness like many older games that make After Burner II enjoyable. This is because it still has the fun of shooting the missles and flying around to get the right shot off at the enemy that the arcade and 32X versions have. However, if you want a good console port of the classic plane shooter, get the 32X version with better scaling, better graphics, and gameplay that is almost like playing in the arcade.