Did you just see that? Well, chances are, you'll miss a lot of things when you're travelling a blazing speeds, flying by traffic, and watching opponents smash into walls before you. Trust me, this game is FAST! 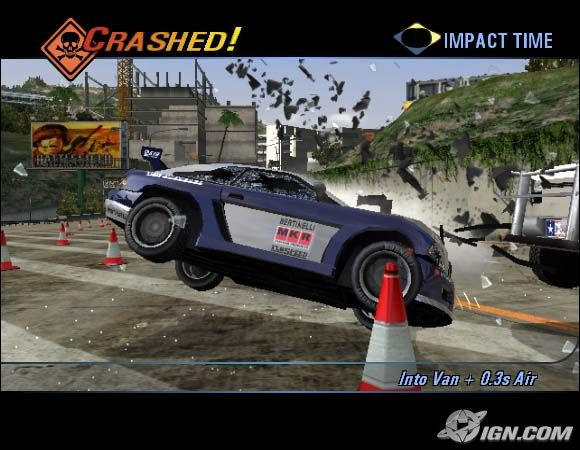 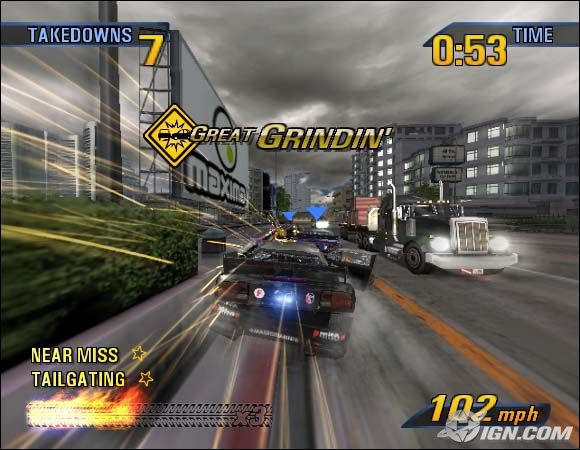 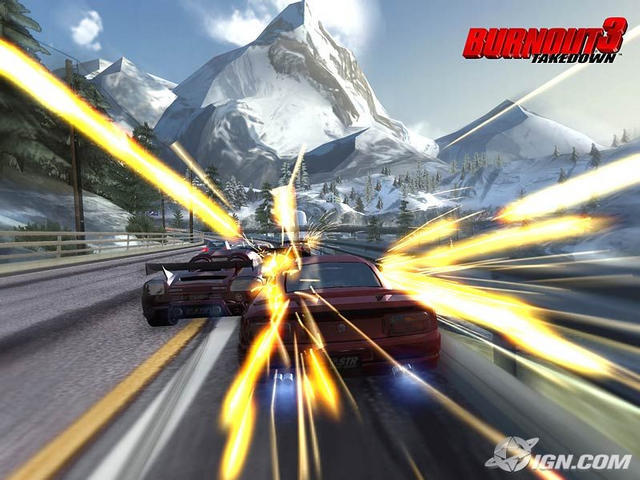 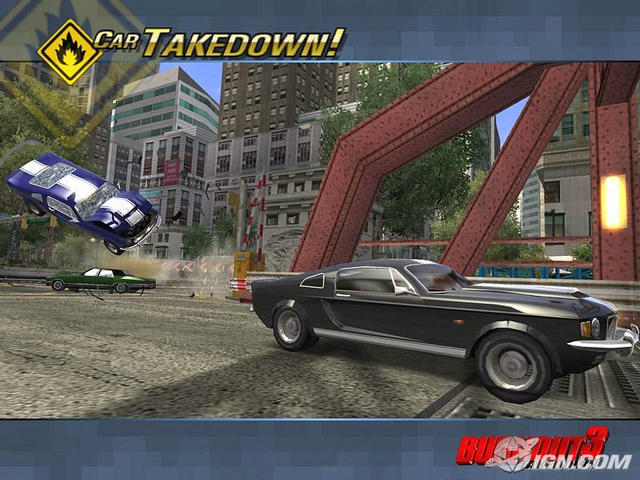 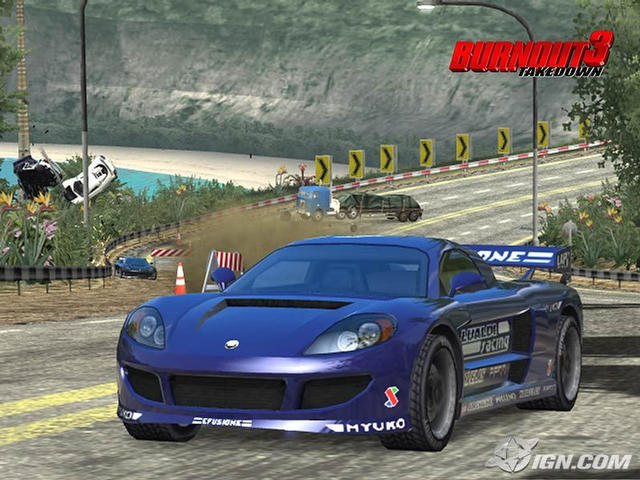 Burnout 3, I'm sure a lot of people have heard about it's younger brothers, Burnout 1 and Burnout 2. While I haven't had the chance to play the original all that much, I have had past experience with Burnout 2, and it was definitely one of my favorites. It combined awesome arcade gameplay, a super fast sense of speed, and a great crash mode to make one of my favorite arcade racing games of all time. Now, moving onto Burnout 3. To say Burnout 3 is fast is definitely an understatement. Now to say that this game is the fastest thing to ever hit a console thus far, would suit Burnout 3 well, and anyone that has played this game would quickly agree.

Graphics: This game has some of the best graphics I have seen on the PS2. With everything flying by you at what seems to be 800 MPH, the graphics engine holds up extremely well. Car's are rendered beautifully, the game runs at an awesome 60 FPS with minimal frame rate dips, particle effects are unbelievable, and the 3D world outside of the race track also looks awesome. I was also extremely satisfied to see that there were basically no glitches to be found anywhere, and in this case, is pretty damn amazing, considering everything goes by so fast.

Sound: The sound in this game is great. Although the soundtrack could have been better, and more varied (Basically 43-44 sounds of punk rock) I found a few songs that I enjoyed. Everything else was great from the sounds of pedestrian car's horns, the sounds of your enemies cars being shredded into several pieces as they are being smashed into rail guards, to the great sounds of your car shifting gears (the game is strictly automatic only), Burnout 3 sounds great in all aspects, and I'm sure even better on 5.1 systems, as Dolby Pro Logic II has been implemented into the PS2 version of this game.

Story: There is basically none to speak of. You're some random driver, driving around and entering random championships to win gold medals, new cars, and other neat stuff. It's basically the equivalent of GT3's Simulation mode only it's hardcore arcade racing all the way. So basically, giving this aspect of the game a score is not fair, so I'm just going to leave it at N/A.

Replay Value: The replay value of this game is ridiculous. You'll be able to fly through the main mode of this game in about.... 25 hours, and that doesn't even include all of the Signature Takedowns, Takedown Trophies, and Crash Headlines required to gain access to some sweet rides. This game has plenty of cars (67 in total) to fool around in, and over 100 crash junctions to cause chaos in. There are also so many game modes, just too many to list, but I'll discuss my favorite, Road Rage. Basically in Road Rage all you do is takedown enemy cars (hence the name Burnout 3: Takedown) into walls, cars, and the like. What is so fun about this is that there are always new cars to destroy every second. Although it may get somewhat repetitive after a while, I still find it very fun. And I haven't even gotten into online multiplayer or single console multiplayer, but I really haven't had the time to get into either of those with all of these awesome single player events, but see for yourself, this game is much longer then its younger brother.

Gameplay: The moment you've all been waiting for. What is a game with awesome graphics, awesome sound, but horrible gameplay....? Well nothing, but let's cut to the chase, Burnout 3 stays strong in this category. Actually, this may be it's strongest aspect of all. The Gameplay in Burnout 3 is awesome. When you takedown an opponents car for the first time and it cuts into that awesome camera angle, it is really an awesome feeling that you'll keep with you for some time, but really, what this game takes the cake in is its sense of speed. As I said in my summary, this game is FAST. Seriously, you'll barely have enough time to blink once you're driving some of the faster cars in the game, and although this can get frustrating when you're constantly crashing, having such a great sense of speed makes the game so much better.

Learning Curve: This is definitely a beginner friendly game. It's takes maybe 2 minutes to start winning your first race, and less then that for your first take down. This game is so beginner friendly it's sick, but one thing to note, towards the end of the game the rubber band AI kicks in, and it becomes very hard to win some of the later races, but not TOO hard.

Conclusion: All in all, Burnout 3 Takedown is definitely some of the best money I've spent all year with its lasting gameplay, addictive single player modes, and not yet tested multi player modes, it definitely gets my coveted, "Must Buy," award (not so coveted yet). If you're into any sort of game that really gets your blood pumping, pick this beast up, and you'll be thanking me soon enough.
Review Page Hits: 1 today (610 total)
mediahook