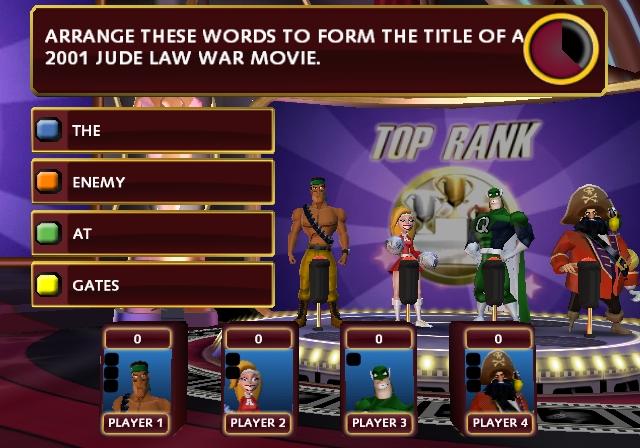 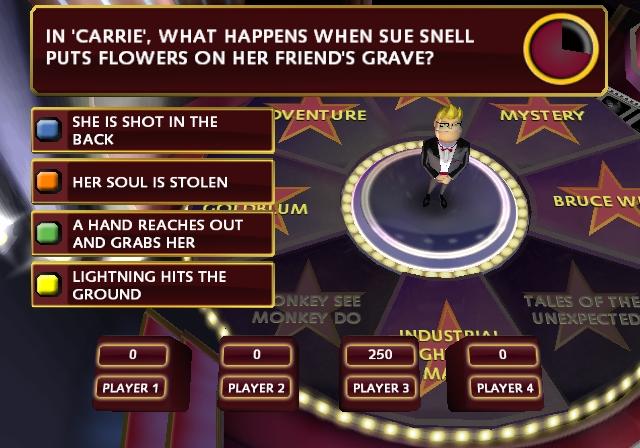 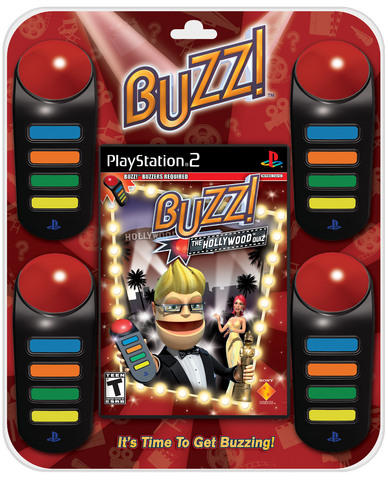 The Buzz! series is continuing to see American releases after the successful launch of Buzz! The Mega Quiz (for more info on this title, check out my review here) and Buzz! Jr. Jungle Party last fall. The latest release I have played is Buzz! The Hollywood Quiz. This newest title is exactly as it sounds - a trivia game based solely on movies and actors.

Buzz! The Hollywood Quiz follows basically the same format as it predecessors. Single player and multiplayer modes are available. Single player features one player answering questions in a fast paced game mode. With only this mode available in single player, there is not much depth as there isn't much variety or goal of this mode aside from beating your own personal high score. The real appeal of the game is found in multiplayer. Up to eight players can compete simultaneously in a customizable movie trivia battle. There are a variety of different mini-game types. Multiplayer matches are broken down into eight rounds, and each round offers a new way to square off against your friends. The Quickfire Quiz is also available in multiplayer, and allows players to square off against each other without changing mini-game types. The match can be set from 10 to 100 questions all asked in succession with the person answering the most correctly being crowned champion. The only real knock I have against the gameplay is that the game does not include any movie clips - all trivia is from a plain question or still frame picture. The lack of actual movie clips in a movie trivia game hurts this title, especially when comparing it against Scene It.

Graphically, the game is a bit better than the last set of Buzz! games to hit the market. I was pleased with the graphics in the last set of games, but Buzz! The Hollywood Quiz improves on those. The game still features a cartoony style and artwork, but this time the characters and sets appear a bit more polished and sharp. While you won't confuse this game with one of the latest graphical masterpieces found on the PC, PS3, or XBox 360, you should still be pleasantly surprised by the clean and pleasant imagery, especially when considering it's coming from a PS2 game.

Replay value really depends on how you play the game. If you're looking for a single player only experience, this game offers almost no replay value. The game gets repetitive and boring very quickly if you keep playing the single player alone. The only way to get true mileage from this game is in the multiplayer mode as it offers customizable game types and support for up to eight players. If you host game nights or lots of local multiplayer sessions, you will definitely get many, many hours from this title.

Another notably improved area is in the sound department. The show host Buzz no longer spouts off annoying jibber jabber between each game round. Now his banter is usually a direct quote from a movie and seamlessly blended in to relate to the game. Instead of cursing him every time he appears on screen, now you may actually be looking forward to what movie he will reference next, especially since they are usually included in a well worked in manner instead of just needlessly thrown in.

Overall, Buzz! The Hollywood Quiz offers a solid party game experience. Anyone looking for a game to play during get-togethers or game nights will be pleased with this game, especially at it's budget price. The touched up graphics and reworked audio are good additions to the franchise but could still benefit from better controller design and the inclusion of movie clips. I would highly recommend it to anyone looking for multiplayer trivia and strongly discourage anyone from buying it strictly for the single player mode.