The Best First Person Shooter... EVER! 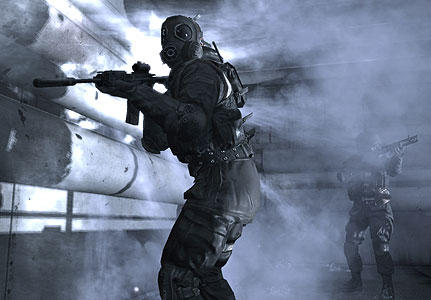 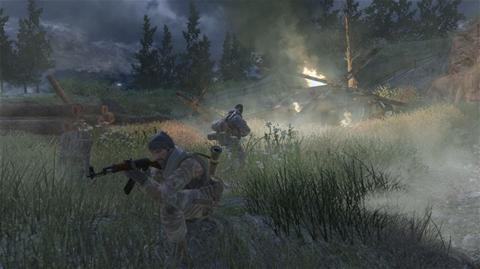 What can I say about this game that hasn't been said before? You are looking at what is quite possibly the best FPS that has come out as of 2008. The graphics are incredible, the single player has some of the best in-game cinematics ever seen, the multi-player will keep you interested for months on end and every bit of the control scheme is available for customization.

I'll start with the single player. While it is a bit short and I didn't find it to be very challenging unless playing on a high difficulty level, it's great to play through at least once. Infinity Ward did a great job of making the game feel cinematic and taking you all over the world to interesting locales. The story isn't the most original you will find in a war game, but it's a great change of pace from the familiar WWII stories that have been a staple of the COD series for years. There are a few intertwining plot elements which involve a terrorist leader in the Middle East. To get to this leader you need to travel through England, Russia and of course, the Middle East. Each environment feels different from the last. Russia (or Pyrpiat to be exact) is my personal favorite location. It feels absolutely desolate and there is very little life to be found. There are a few things to unlock in the single player. You need to find secret documents/info that will unlock visual effects you can use in single player mode. The effects included white and black mode and negative mode. These effects are interesting in small doses, but they end up feeling like a waste of time compared to the perks and guns you can unlock in the multiplayer mode.... And while the single player is fun, it's got nothing on the multi-player.

With the multi-player Infinity Ward did some great things to make this game fun to play for months on end. They have implemented a "Perk" system that you achieve by leveling up. Perks are things like equipping 3 special grenades, making your footsteps silent, or jamming radar devices. These are earned by playing multi-player and scoring points in all of the different games modes available. Points are awarded for kills, wins and specific tasks set under each game type. As you level up, your class goes up with you. You open weapons, perks and challenges (which help to earn additional points). the game types include standard team and one for all deathmatch. Along with that there is domination (a derivative of capture the flag, three flags on the map, each team has to hold as many as possible until the first team reaches 200), Headquarters (a specific location is listed as HQ which you have to capture for as long as possible, first to 250 wins) and Sabotage/Search and Destroy (both games similar, a team has to bomb a target while the other team defends). On top of the leveling up and multiple games types and maps, you have the option of getting prestige mode. This is unlocked when you each level 55. You can choose to remain at that level or get a special icon next to your name with each level of prestige earned. You can do this 10 times, meaning you can level up 550 times. That should keep you busy for a while...

In both single and multi-player you are treated to some of the best visuals and sound effects you will find in any game on any system. From a visual standpoint Infinity Ward gets every piece pitch perfect. The lighting is dynamic in day and night time scenes. The animations are wonderful from reloading to getting blown up by a grenade. You can tell a lot of work was put into the weapons as each class of weapons feels distinct. LMG's feel bulky and slow you down while a SMG feels light and keeps you moving quickly. Also well done is the sound of everything. When playing this game I suggest using headphones as the sound is dynamic enough that you will be able to hear someone walking or crawling up on you and you will hear it from the correct direction. Guns and grenades all have the proper audio oomph. When a grenade is thrown at you a nearby team mate yells to you about it. When a nearby team mate is reloading he will as for cover. It's little touches like this that make it feel like you are on the battlefield.

This game is worth the price of admission for the multi-player alone. It will keep you occupied for months on end. It is the most played PSN game so you will never have a problem finding someone to play. The single player is a great play at least once or twice..... And really, I got nothing else to say. If you like FPS games, you need this one. Now.
Review Page Hits: 0 today (206 total)
mediahook