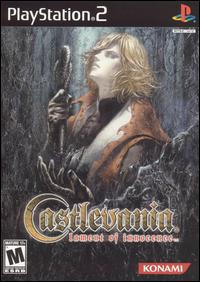 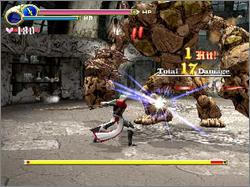 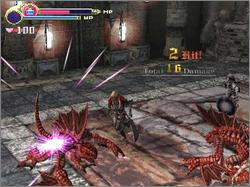 Konami's classic Castlevania franchise has finally arrived on the next-generation videogame consoles, and the result, while not perfect, draws on classic moments of the series to present a decent three-dimensional adventure.

This particular Castlevania game declares itself as the ultimate prequel to the rest of the series; this is the true origin of the famous Belmont clan of vampire-hunters. Set in the eleventh century, you take control of Leon Belmont; nobleman and knight of the clergy. His fiancée, Sara, suddenly disappears, and Leon sets forth on an epic journey into Count Dracula's castle to save her.

The castle is divided up into five levels, all selectable from the start. In these five different levels, the player will fight against the minions of Vlad Dracula, solve puzzles, recover keys, and obtain power-ups to help aid in his quest. From the Garden Forgotten by Time, to the Ghostly Theatre, the five main levels all contain ambiance, with well lit environments and nice graphical touches that help bring the castle to life. Hidden areas are un-lockable by finding keys and switches scattered throughout the main areas. Art design is very well done, with lush colors and environments with complete gothic flair. The characters are rendered well, and Leon is animated and moves smoothly. One of the best things about the game is the lush musical score for the game; mostly soothing classical compositions, but sometimes a hybrid of classical and techno that fits very well with the game and its environment. The score alone is worth the purchase.

Game play wise, this is a mixture of classic Castlevanias from years past, with a few new combat moves added because of the games 3-D setting. Leon's primary weapon still remains his trusty whip, which can be upgraded with various spells. The classic collection of secondary weapons is still available as well; holy water, the cross, a dagger, and the axe. There are 7 different colored magical orbs that the player can obtain, and each orb reacts differently with each of the secondary weapons, giving you a large palette of different weapons to try using against the creatures of the night. Potions and other items can be used to cure poisons and other attacks that certain creatures attack Leon with.

Castlevania games have always been noted for their large end-level boss battles, and this game once again offers up huge end bosses that all feature classic set-pattern attacks. From huge Medusa heads with slithering snakes, to the Grim Reaper himself, the end boss battles are challenging and fun.

Borrowing from established 3-D games such as Resident Evil and Devil May Cry, Castlevania features a pre-determined camera angle for each area, hallway, and room. Usually the camera is adjusted in a good area that doesn't distract, but occasionally will be placed in a bad area where it hides an enemy off screen, or makes you miss an otherwise easy leap or jump. With this particular game setup, it would be hard to have a "floating" camera, where the user controls the camera themself. This stationary camera works well, and helps the player forget about the camera work, and get more into the game itself.

While it's a well made game, the game play suffers from bouts of repetition and the "I've-been-here-and-done-this-already" syndrome. There are endless numbers of hallways that connect most of the main rooms, and they all have a tendency to look very much alike, the player could get bored with constantly running back and forth in these areas. Luckily, there is an excellent map feature brought up with the "select" button, so the player will never get lost. The games length is disappointing, clocking in at only around 10 hours for the main quest, but there are up to five hidden areas and bosses that will keep the hardcore player searching, which adds to its length. There are also un-lockable characters you can play as, and some extra game play modes as well, so plan on revisiting the game a few times if you are one of those players that has to un-lock every secret.

Aside from these issues of repetition and sometimes wonky camera angles, this is the first successful Castlevania game in 3-D. The short time it takes to beat might deter some people, but the hidden levels and bosses stretch it out for at least a few more hours, and if you want to play as all the hidden characters, plan on beating the game at least three times. While not as good as past games of the franchise, Castlevania: Lament of Innocence is a fantastic adventure with good game play and an epic soundtrack, and is worthy to belong in any action/adventure player's collection.