Where the crimes'll be solved by her and her and him, Three's Company in space! 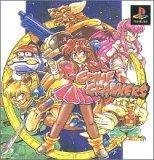 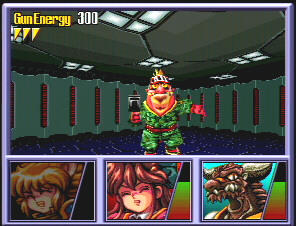 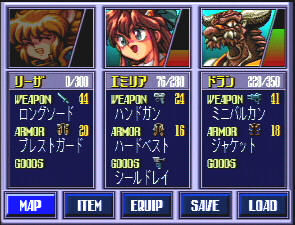 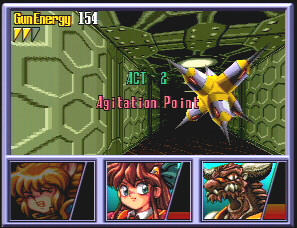 When I first heard about the import Playstation game Crime Crackers through some unrelated Google search, it was touted as an anime-infused, first person shooter/role playing hybrid that was very import friendly (aka non-Japanese speaker/reader). That description definitely had my attention. I tried to search out more information on it, but only found little pieces here and there. Seeing that I didn't have the ability to play import Playstation games at that moment, I stored away the name so I could possibly pick it up when I had a modded Playstation.

That day came a couple months ago when a GTZ member had a bunch of import Playstation games for sale. He happened to have Crime Crackers, along with its sequel Crime Crackers 2, and I snatched up both. The game description he had for the games said they were like a "Doom RPG" where you could buy equipment and raise character levels, with fully animated movies in-between levels. I quickly plunked my cash down for both games.

Sometimes there are good reasons games never cross the ocean - bend an ear!

Crime Crackers revolves around a group of space sleuths who travel around in their big pink, phallic spaceship, solving mysteries. Original! Your trio of main characters are ripped straight from an anime version of Three's Company: a brunette, a blonde and some dragon/lizard guy (filling in for John Ritter). But that's not all! Your crime cracking group also includes a purple-haired girl, a chicken man too ugly to cover in breading and deep fry (maybe the Don Knots character?) and a little flying robot with big eyes and a hard hat that appears to be made out of a paper bag. When you have no idea what the characters are saying through long story segments, you make up your own crazy version of what's going on - which is what I did.

But I'm not sure I would really care either way. The story is told using the "talking heads" method (mugshots of each character where the mouth moves as they "talk") all told around an unoccupied Poloroid of the cockpit of your ship. I know this game was released in 1994, but someone forgot to tell the developers that they weren't developing for the Super Nintendo. There are supposed to be animated movies to help push the story along, but I didn't play long enough to come across one. Either way, the story telling, beyond writing the script, had little to no time put into it. At least have that Poloroid have the talking characters in it!

Once you skip through all the unreadable text, the main characters are promptly plopped into a level. From here, the game falls apart faster than this year's Kansas City Royals. The levels are a claustrophopic's nightmare: tight rooms and even tighter corridors, no spots of recongition to be found and no easily accessible map. There is a spot for it in your menu and a picture on the back of the box that shows someone using it, but I never once found whatever I needed to make it work. Only thing harder than finding the map is finding a 2006 All-Star off the Royals team (sorry KC lovers, but Mark Redman; even you can't feel good about that). It felt like moving through an empty hopsital that was slowly shrinking in on itself, while someone left a crappy 80's instrumental rock song looping over and over again on the intercom.

I progressed through level one okay, but level two had me wanting to put my Playstation in the toilet. I became so lost, trying to find some stupid keys. Fun part about these keys is that everytime you come across a door that the keys can open, you have to open the menu, dig through your inventory, pull out the key and use it yourself. Every single time. Because I know nothing is more fun in real life than pulling out my key ring, flipping through to find my car key and then using it to unlock the door! Blows my mind every damn time!

Anyways, back to the level crawling. Every corner, every room, every door, every wall looks exactly the same. The level designer must have discovered ideas for levels from mice mazes because that is pretty much what each level feels like. I was wondering if I would ever find my way out. If I had access to a damn map so I could somehow keep track of where I was in relation to something, anything in the level, it might be more tolerable. But, as I said before, I was never able to find one, so I wondered aimlessly through each level, hoping to run into whatever I needed to progress. I even started drawing my own map, but by that point, I couldn't take anymore.

As for how the game controls, it doesn't get any better. In fact, it gets worse. For starters, this game is not a first person shooter in the way that the Western way of life has described them as being in 1994 (this game's release date): run and gun shoot 'em ups. Yes, the game is played from a first person perspective, but that's about where the similarities begin to fade. The three main characters move as one unit and you control the lead character, selectable on the fly with the select button (remember this for later). You can move around with the D-Pad, strife with the shoulder buttons - standard controls. As you saunder through the level, you will eventually come across an enemy, more often than not by itself. They are completely polygon and are surprisingly decent looking, but contain so much more detail than the levels that they look superimposed.

Now, to kill the enemy! Let me just blast the crap out of it and move to the next, like usual! Not so fast - this game doesn't work that way. Now, if you took the time to read the back of the box, something I didn't bother to do the first time, you would notice two of the only English words stuck between the Japanese: action & RPG. This game was meant to play as a FPRPG and dammit, it's not changing because of some hot shot American gamers! Problem is, the developers got action RPG and shooting gallery games mixed up, and made a game that played more like the latter with experience points and equipable weapons.

To use your main weapon, you have to press square to bring up a crosshair before you can fire. Except, when your crosshair is up, its movement is mapped onto the D-Pad, leaving strifing as the only movement you can make. But, the levels are far too small to effectively strife, so you pretty much have to stand still and blast away. Essentially, you are playing a slow-paced shooting gallery game until you drop the crosshair. You are given three super attacks to be spread between your three characters, each one with a different attack, but to be honest, I didn't notice them to have much of an effect on anything I blasted them with. All I saw was psychedelic colors and cherry blossom leaves and wondered if I just transported the enemy to an opium house.

The developers did see this control scheme as being a problem, so they added a blocking move, performed by holding down L1 and R1, to try and relieve the augish that comes with not being able to move and shoot. Then they decided that only one of your characters can block most everything, the other characters not so much. Again, they foresaw that this might cause a problem too, so they allow you to change to any character on the fly by using the select button. They obviously didn't bother to test this control scheme as it is far too complicated to fire, strife, switch characters twice, block, strife, switch characters twice, bring up the crosshair, fire, block, etc., let alone be able to do it to the point that it resembles something effective.

So if you are lucky enough to make it through the regular enemies alive, you can take on the level boss. The developers obviously forgot their own debilitating control design and let the boss characters move fast and fire furiously. Since you can't multitask at a reasonable speed, let alone move fast, your only hope is to unload your weapons and hope your healing item stock is enough. Sometimes you are lucky, sometimes you aren't.

Now would be where I would talk about the RPG elements and how they are a nice addition to the first person shooter mix, but with a game as unplayable as this, it doesn't even matter. Besides using healing items and items to keep my ammo pool from running dry, I didn't play long enough to take advantage of any of the other RPG elements (level building, equipment, etc.) the developers tried to impliment. It just didn't matter.

If you are a total glutton for punishment, ignore my warnings and look up this game (hell, you can have mine). Or, spend your money on the light years better sequel. But trust me when I say there is nothing here worth your time. This game would have been unbearable when it was first released and now, 12 years later, it has only gotten worse. Avoid it at all costs unless you get off on unlocking your front door 50 times an hour while watching an anime space version of Three's Company that you can't understand. Then, by all means.
Review Page Hits: 0 today (131 total)
mediahook