After a somewhat disappointing showing on the N64 and over a decade-long hiatus, Donkey Kong is back and better then ever! 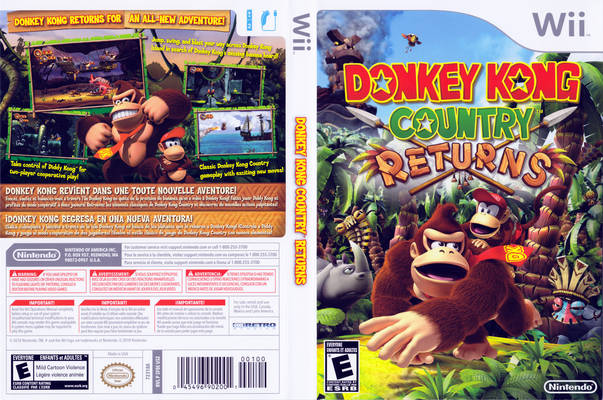 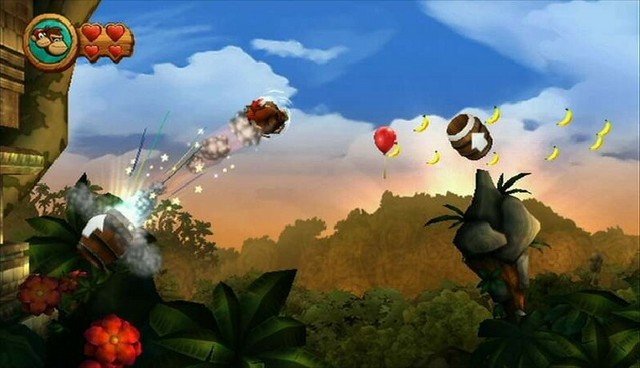 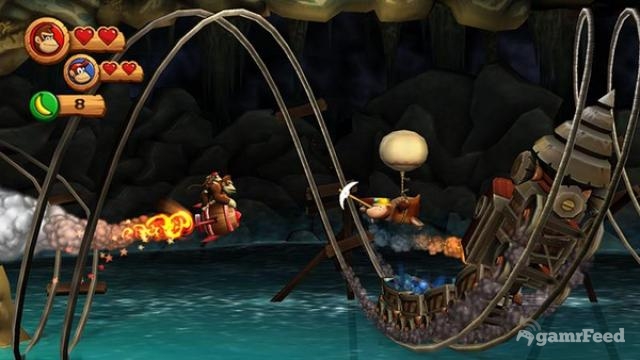 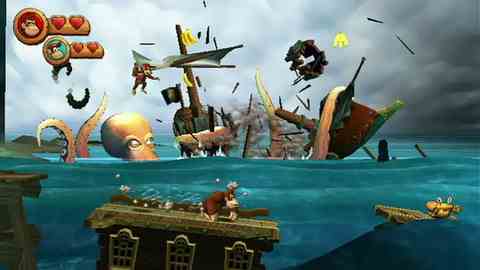 If there's one thing Nintendo does well, it's how they treat their top franchises. Anyone that remembers Rare's Donkey Kong Country series on the SNES will feel right at home here. Retro Studios ignored the sub-par Donkey Kong 64 game and went back to what worked, and in the process made the best "retro" game of 2010.

For anyone that is unaware, Donkey Kong Country Returns (DKCR) is a 2D side-scroller with a 3D background. The game usually plays left to right with the occasional backtracking and even background play. You see that island in the background? Well, find a barrel, and it will probably shoot you there. Most of the series' staples make an appearance, whether it be the previously mentioned barrels, supporting characters, animals to ride on, or mini-games. Diddy Kong also returns, although you never actually play as him. The addition of Diddy Kong gives you more hit points and the ability to float down to the ground using his jet pack.

Make no mistake about it though, this game is hard. It's harder than any of the SNES games and a reminder of what games were like before 3D worlds took over. You need perfectly timed precision jumping and a bit of luck to get through some levels. Some levels require you to rush as you're racing against rising lava or running away from a crumbling wall or falling rock. Other levels require patience and precision timing. If your goal is to just beat the game without collecting everything, it's difficult but very possible. Figure the game will take anywhere from 5-10 hours depending on your skill level.

If you are a completionist, expect it to take you MUCH longer. Collecting all four Kong letters and three puzzle pieces in each level will open up one bonus level per world. The bonus levels are very difficult as they don't offer any check points or any Diddy Kong barrels. And even after you complete the main quest, there is a ton to do. You can go back and play every level in reverse, and each level has a time attack mode. If you're hoping to get the gold or platinum medals for time attack mode, you need to be PERFECT. Forget about dying, just one mistake or one hit will mean the difference between gold and silver. In addition to these challenges, they also allow you to play the levels in reverse without the assistance of Diddy Kong, which means no jetpack and no extra hits. I put in over 20 hours, and I've only completed about half of the challenges.

I wish I could say the game was perfect, but there are a few things that bog down an otherwise amazing experience, and they all have to do with the controller. Retro Studios offers two choices, Wii-Remote and Nunchuk or Wii Remote held sideways. Either way, there are required motion controls that feel tacked on and annoying. Every time you roll, you have to shake the remote. The first problem is that it's not extremely accurate which can lead to some cheap deaths. The second problem is shaking the remote repeatedly gets to be annoying. I ultimately chose to use the Wii Remote sideways, but I have always found that to be uncomfortable. My other big complaint is the lack of Classic Controller support? This game seems to be tailor made for it.

As for the graphics, I was extremely impressed. They were colorful and artistic without being intrusive. One of my biggest problems with Donkey Kong Country 2 and 3 was that there was so much going on at once that I wouldn't know where to land or I would lose track on my character. That never happens here. It continues to impress me that certain Wii games made with care can have such impressive visuals. The sound was good as well. The songs are catchy and never get annoying.

Overall, this is one of my favorite games of 2010 and one of my all-time favorite Wii games. I can't recommend it enough. If you are into retro style games, 2D side-scrollers, or just overall high quality games, I strongly recommend you go out and buy this right now.