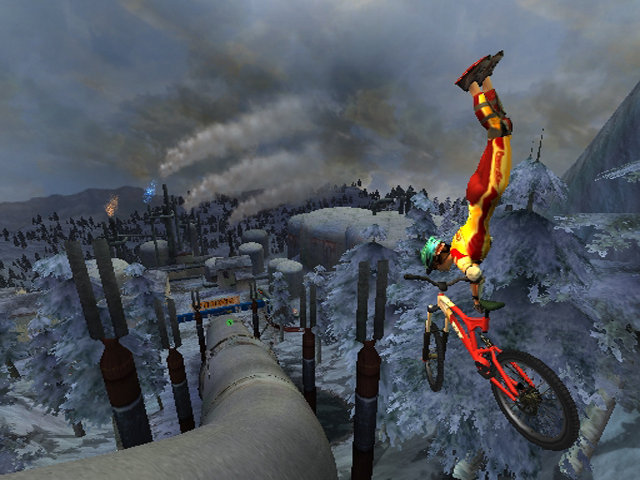 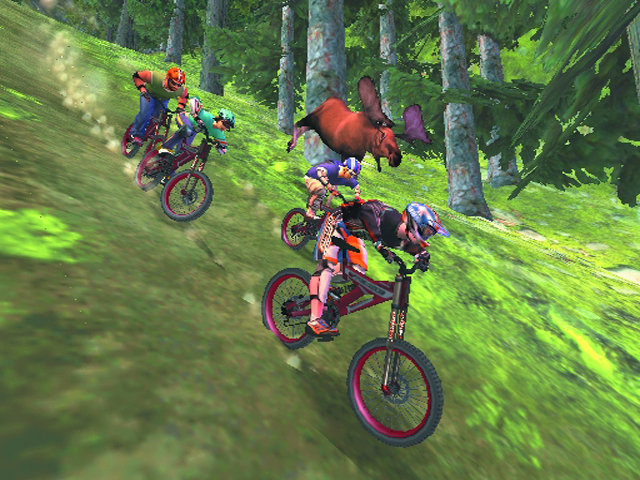 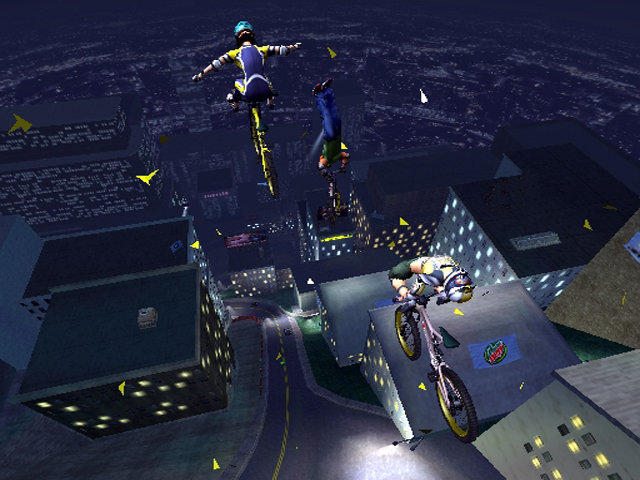 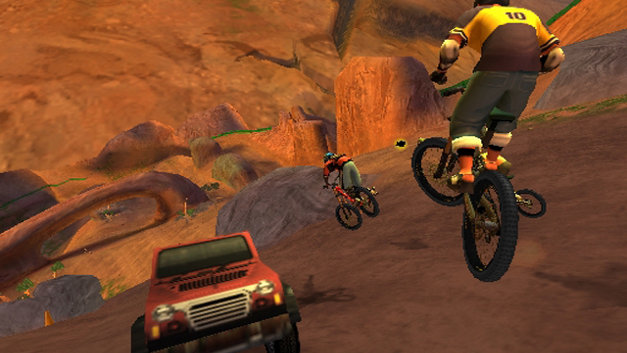 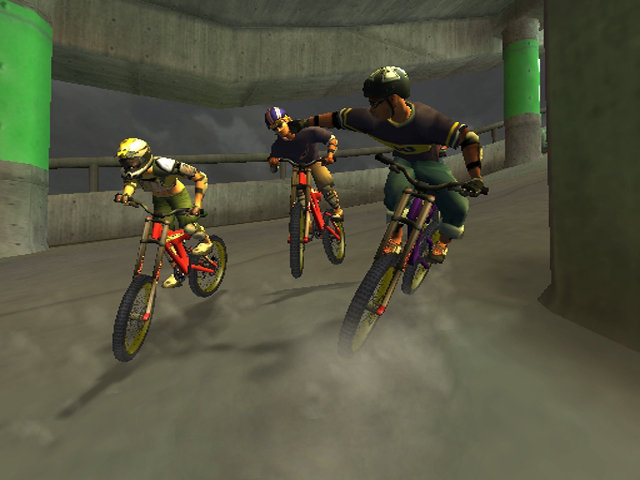 In the 32- and 64-bit eras of gaming, extreme sports games were all the rage, and leading the way was one name: Tony Hawk. Thus, a plethora of skateboarding games made their way onto both the original PlayStation and Nintendo 64. Then the next generation came, and coming with it were different extreme sports like inline skating with Aggressive Inline, BMX bike riding, and snowboarding with the SSX series. What Incog Inc. Entertainment's (makers of War of the Monsters and Twisted Metal: Black) Downhill Domination shares similarities with is SSX, but instead of shredding down a snow-covered mountain with a snowboard, players ride mountain bikes down dangerous mountains and hills. It's a game that both makes me yearn for a return to this glorious era of gaming and one that I can't help but get frustrated at.

The star of the game is the various mountains on stage here. The main mountain races are quite lengthy, lasting anywhere between four to six minutes on a good run. They're all also full of character, each feeling like an adventure you're taking from beginning to end. One of my favorite downhill runs has you going through towers and riding down spiral staircases, before you pass through a graveyard, then a series of ancient ruins, all before the final stretch where you blaze through the city streets of a coastal town. And this is all in just one race. The true fun and sheer joy of playing Downhill Domination's races is that each course is teeming with alternate pathways. It's never just one particular path you have to go. You're encouraged to travel off the beaten path (but not out-of-bounds) and take risks to discover killer shortcuts and impressive jump opportunities. Finding the best racing line is something that takes a little patience to perform, but when you finally do discover it, it's a truly rewarding feeling.

Besides alternate paths, courses in Downhill Domination are littered with forests, rocks, logs, trees, wildlife, secret passages, shortcuts, and more to keep riders on alert and aware of their surroundings at all times. It's absolutely vital to keep your cool and your concentration. Of course, with the length of many of these courses in mind, you're bound to have an accident or two-- or twenty-- in a given run. Whether it's not landing from a jump properly, falling off the track, going out-of-bounds, or crashing into something, you'll be falling off your bike a lot. Thankfully, getting restored and back on the track is a fast enough process that you don't feel cheated when you crash.

Combining the downhill racing action of the SSX series and the combat of the Road Rash line of games, Downhill Domination plays and handles well. If you happen to have the need for speed, then this game will definitely provide it to you. The physics are well done, simulating what I can only help but assume would be how bikes, tires, and riders behave to the numerous obstacle and terrain types Downhill Domination has. Steering isn't too rigid nor too loose, either, offering a pleasant balance. Usually when you crash into something and fall off your bike, it's your fault and you're paying the price for it.

As you're blazing a trail down the mountain, rapidly pedaling like you've never pedaled before, you have other worries to be concerned with, namely up to nine other opponents. This is where combat comes in. With a press of the Square button, you attack to your left, while a press of the Circle button unleashes your right fist, lashing out at any foolhardy rider driving too close to you. As you continue to deliver the smackdown to the unrighteous, your combat skills improve, allowing you to perform more powerful maneuvers like kicks and bottles that can be thrown that home in on opponents. You can really hamper the progress of other riders, even knocking them off of their rides, but at the same time, combat is generally not used much because unless you stay with the pack, you'll either be too far ahead of everyone or eating their dust too much to be able to utilize it. Plus, you'll often crash in a race, and this takes your current weapon level in the race and instantly lowers it.

Your downhill daredevil has several meters to be on the look out for, such as a green series of dots that show his or her energy. When that meter has some juice in it, you can double tap the X button to speed up. However, this eats up the gauge quite quickly. Through pulling off tricks, reaching checkpoints, and collecting green-colored power-ups (one of many power-up types in the game), though, your gauge gets replenished.

Tricks aren't the most engaging aspect to Downhill Domination's gameplay, but they're satisfying to pull off all the same. That notwithstanding, most tracks aren't meant for you to unleash the trick beast and perform trick after trick. They're just not designed that way and intentionally so. The courses are designed well this way (and as you read earlier, many other ways, too) in the regard that you have to learn the courses to figure out when it's best to trick, and where it's best to trick from. You eventually find your preferred racing line.

Still, actually doing tricks is quite simple that even I could do it. When in the air, you can press and hold down a different combination of the shoulder buttons to perform spins and flips, to not only give your rider green energy in their gauge, but also to earn points. Points are tallied up at the end of runs , and these transfer over to cold hard cash (also earned from taking out opponents and from what place you finish) to invest in the bike shop.

The bike shop sports a large variety of things to purchase and unlock. There is stuff that is a no-brainer to have at a bike shop like being able to upgrade bikes-- whether it be different models, colors, new tires, etc., purchasing new items, or buying special new features for the game.

There is a sizable sum of playable riders to choose from, though all of them are pretty much derivative vanilla characters whose only real difference is what dialogue they repeatedly squawk mid-race. Each character is also not the greatest to look at, showing that Incog Inc. Entertainment took most of their time giving personality to the courses themselves and not so much the riders that blaze down them.

While the characters don't exactly excite, the amount of single player options for each rider is truly incredible. The main meat and potatoes of Downhill Domination's solo campaign is the Super Career. This puts you in a series of over two dozen events to try to earn enough points in one event to reach the next. Not only are there traditional races where you go down the main course of each of the game's nine mega mountains, but there are other event types, too. One is the mountain cross series of events that are much shorter affairs where you ride up and down moguls, hills, and bumps while tackling tricky and tight turns. The other is the technical downhill series of events where the paths down the mountain are much narrower and require extreme precision to get a leg up on your opponents. You can even pursue individual career types that feature all one type of races, such as free ride (regular races down a long mountain course) or technical downhill.

Downhill Domination looks the part of an extreme sports bike racer. Fortunately, for a game that is so superbly fast, you can usually see what's coming ahead of you. This is thanks in part to the phenomenal draw distance. Sure, the camera can be a bit slow at adjusting its angle when you make a steep turn, but overall, seeing upcoming hazards isn't too much of an issue. The mountains are insanely detailed, supporting a dense amount of objects, from rampaging wildlife that can cause you to bail like nobody's business to poor tourists who can get run down by passing racers. The sound of the game can be a bit grating, especially with the repetitive voice clips given by each racer. No, Cosmo, I don't care if you can go even higher next time. You're not four years-old, on a swing set, and I'm not your daddy. Meanwhile, the music is a collection of licensed alternative rock, rap, and hip-hop, the usual fare in an extreme sports game like this one.

Coasting down a mountain with trees, rocks, and wildlife soaring past you; leaping from a high peak, over a crevasse, and into a cavern below; and letting out your frustrations from the day by beating down on your rival riders are all reasons enough to look into Downhill Domination. The game is a pure adrenaline rush and a wild ride. There are some nagging issues that bring down the experience overall, but ultimately Downhill Domination is satisfying to play. By putting the game disc into your PS2, you'll soon realize it's all downhill from here, but rest assured, that's a good thing.
Review Page Hits: 2 today (350 total)
mediahook