A good excuse to use your head! Just make sure you don't lose it. 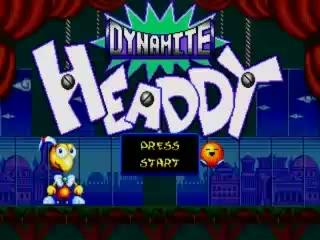 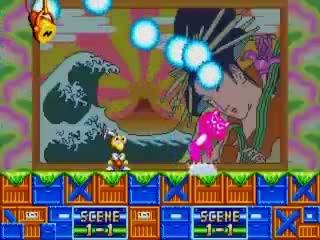 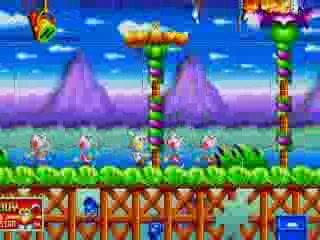 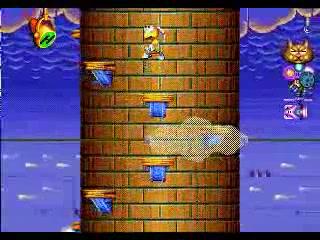 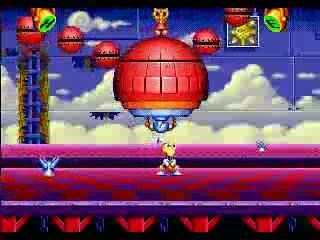 There's always a diamond in the rough when it comes to video games. Games that flopped or were overlooked when they first came out are now priceless treasures (no pun intended) in the eyes of many gamers. Such is the case of Dynamite Headdy, the third game to be produced by Treasure, the same great company who brought you Gunstar Heroes and Sin & Punishment.

Meet Headdy, a puppet with a detachable head who minds his own business when his town gets attacked by evil toys led by Dark Demon, who pursues his dream of conquering the world. The toys, Headdy included, are captured and sorted to go either into forced minionship or to the incinerator, which Headdy gets the latter. Not the type to give up without a fight, Headdy escapes the dump truck and sets off for a quest to defeat Dark Demon and restore peace to the world, undaunted even by Trouble Bruin, Headdy's old rival.

A natural platformer, the not-so-simple goal is to go from point A to B in one piece. Headdy's basic moves is to jump and toss his head in seven directions, eight if you're in the air. Periodically there's a box that allows you to have a different head that does different things, depending on the head. Headdy can also use his head to latch on to certain characters and toss himself up onto another platform. Sometimes he'll get a head for a shmup situation, which you can use three different heads to do the shooting. The two main drawbacks to this area is you have to do tutorials near the beginning and you can die easy. The bosses are tough nuts to crack, and you really must have good concentration (or a Game Genie if you're that terrible) to win.

There's a saying that "all the world's a stage." That saying rings true in this game: There's always a small advertising sign, an object that hangs on a string, some workmen or clockworks behind the stage, and even a warehouse setting! Given all that, this is where this game really shines. There's enough props to really make you dance in certain situations! The toys and characters can be quite appealing, and there's plenty to see. The Spinderella boss and its rotating floors is very impressive! Even the tower levels are something to be commended!

Sounds here are great for a Genesis game, and the music is rather catchy, although not as memorable as others. There's even sounds and yelps that the characters make. There's music that really makes your adrenaline rush, as well as music that that soothes the savage beast.

All in all, this game lives up to Treasure's name as a heart-pounding adventure maker and has a Sega flair all over itself. The strangely appealing characters and the atmosphere are what people come back for, despite being bogged down by somewhat tedious tutorials and the hard difficulty level. This is a true treasure gem in the desert of the video game world, a game that will be well worth the time and effort to play.