The ultimate time-killing, do-it-all RPG. Play one hour of it and you can't put the controller down, even after you've saved the land 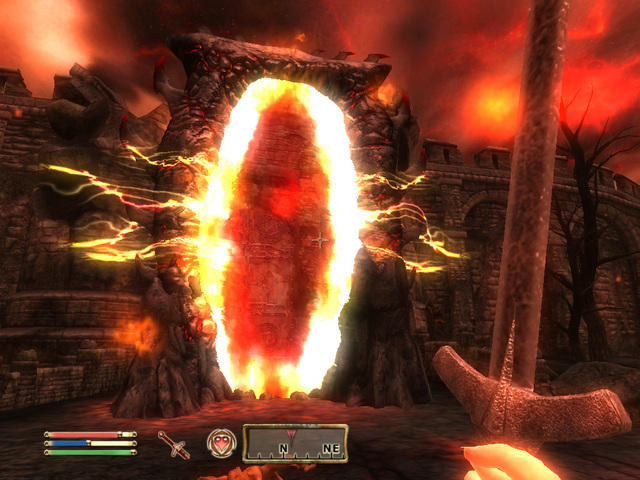 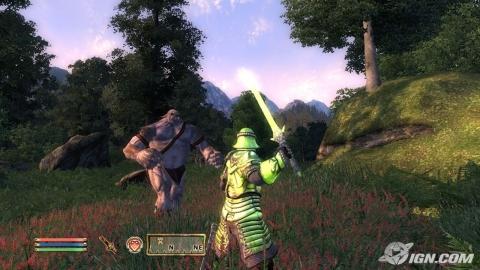 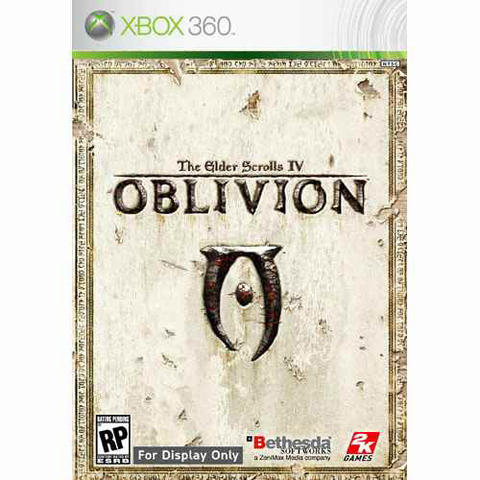 One thing I can say to start this off... Once you've beaten the game, and played for about 100 hours, you're going to look back and think to yourself "Wow, I would have never expected a game that starts you off in a jail cell and crawling through a sewer to be so fun."

But the beauty of Oblivion is it is that fun.

As soon as you make your character just like you want them to be (customize their birth sign, race, and class), witness a murder of the emperor, and get out of the damp, dark dungeon, you're gonna realize what you can do in this game.

The gist of it Oblivion that it's loaded to the maximum possible amount of data, mood-fitting music, awe-inspiring landscapes, unique characters, and hundreds of sidequests you could possibly fit on one disc.

I'm not going so spoil any of the story... because there's so much more to describe and explain.

First off, at the absolute first point of the game, you have to customize your character to be what you want them to be. The race you choose determines some aspects, such as abilities, extra attribute bonuses, and so on. As you advance through the dungeon, which is both a tutorial and sheds light on the plot of the game, the next level of customization fit in with the story, such as the emperor asking you what sign you fall under, which will give you even further attribute bonuses and a special ability, such as the ability "Moonshadow" if you were born under The Shadow (which is what I chose).

That covers the basic starting point of the game. Now onto the next portions.

When you get out of the dungeon, the real choice kicks in. Do you want to continue with the main quest, or do you want to wander around for a while, talking to people, asking for things to do, and do the sidequests? It's really up to you. The main quest is basically saying "Go on man, do what you want to do. I'll wait right here until you're ready. Take your time."
The sidequests vary. You may have to kill a certain number of animals or monsters, escort someone to a certain place, retrieve an item... There are lots of different things you can do. And the best part is, if you don't like it, do a different quest. For the most part, there's no real order you have to do them in, except for the main quest.

The second beauty of Oblivion is that it's an open-world RPG. Go where you want, do what you want, it doesn't matter. There's a day/night cycle to add to the realism, and NPC's and shops, etc. abide by it. That's where a few other attributes come in. For this part, stealth and security, stealth being the art of crouching around and not getting seen. Security being your ability to pick locks. Some people play Oblivion by sneaking around, lockpicking store doors, and stealing everything they can, then selling it. Only drawback to this? The law.

I mean, you can't expect to do this and get away for free, can you? Of course not. There's a law system in place. If you murder, assault, steal, lock pick, pickpocket or do other unlawful things, you will be pursued by the officers in that town, and if they catch you, you have a choice. Go to jail, pay the fine, or resist arrest. You go to jail, you stay there for a while, depending on what you did, you get out, you lose skills for not using them. Pay the fine, you pay what you owe, they take anything you stole (They know, trust me.) and you wind up at a castle or somewhere not far away from that town. Resisting arrest is pretty much suicide if you have it in you mind that you can try to kill every officer pursuing you. Your only hope is to run, or hop up on a building or something. If you manage to evade them and they stop chasing, they'll leave you alone until you get into another town, and if you talk to an officer, they'll arrest you on the spot. Your only choice is to pay the fine or go to jail. Running does nothing, really.

As far as the combat goes, Oblivion isn't a turn-based RPG.
You collect armor, swords, bows, and etc. as you explore, and some you get as a reward. Armor adds to your defense, so the better you have, the less damage you take. Swords, do just what you think they do. Higher attack rating means you do more damage. Bows, have the same attribute, but you need arrows to use a bow. You can also use a shield if you're not using a 2 handed sword or other weapon, or a bow. Also, your armor and equipment wear down after time. If they break, you're defenseless if armor broke, and you have no weapon if a weapon broke. Always carry extras.

Oblivion is famous for spells. There are so many combinations of spells, which range from weak fireball projectile spells, healing spells, or touch spells, which do damage the same way as a projectile, except you have to be close to something for it to do anything. Using spells drains Magicka (your magic points in Oblivion), which recharges on its own. A higher intelligence rating means more magicka, and higher willpower means it recharges faster.
The power of some spells, as well as the level spells you can use, is judged by the rating of the spell. Restoration, Destruction, Conjuration, and Mysticism. Basically you level them up by using the corresponding spell type, and the higher you get, the more powerful of that kind of spell you can use.

Because of the variety of spells, weapons, and not to mentions potions and poising you can make through alchemy and buy, you have hundreds of tactics you can use in-battle.

That's pretty much everything I can explain about Oblivion.

Graphics 5/5
BRILLIANT in every way. Even on a standard definition television, the graphics are stunning and couldn't be better.

Sound 5/5
Despite some characters sounding like others, the music is nice, and the voice acting is generally good. It more than gets the job done, and the music always suits the mood.

Gameplay 5/5
This sets the standard for RPG games in my opinion now. Lots to do, nothing is ever the same. You don't get bored unless you hate RPGs. Wonderful.

Replay Value 5/5
I hope you can judge replay value in this game by putting down the controller and picking it up again. You won't even want to do that when you get latched onto this game, much less start a new game when there's so much you haven't done in the save you have.

Overall 5/5
Very few things are wrong with Oblivion. Some bugs here and there, but the updates on Xbox Live fix that. A beautiful game in every sense of the word. It should be a crime to not at least try it.

The game DOES have bugs, but since the Xbox Live updates came out, I haven't seen very many. I can't describe the bugs because I update the game once the updates come out.
Review Page Hits: 2 today (179 total)
mediahook