Everblue 2 is a great diving simulation game that let's you explore a massive undersea world while still maintaining an ok story/plot. This game, though widely unknown, surprisingly holds together quite well. 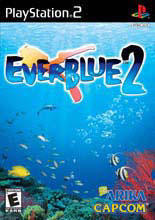 Everblue 2, which is the sequel to the import PlayStation hit Everblue, is basically an underwater scavenger hunt type game. You play the part of Leo, who is a world famous oceanographer and explorer. Upon having his ship wrecked in a storm, he awakens on an island seemingly in the middle of nowhere. There he falls in with a group of kids who have formed a diving club and shares in the fight against a tyrannical salvage company. Sound interesting? Well surprisingly, it is.

While you will not find guns, blood, or guts in Everblue 2, that is no reason to turn it away. You will actually find a rather relaxing environment that provides you with a good break away from mainstream RPG or action-adventure games. If you like the sea, diving, or just plain exploring, you should certainly give this game a try. Also, many gamers should take note that it is insanely hard to die in this game. You have to try almost to die....HA. Sad.

Gamers who like RPG's should note that you shouldn't expect to beat this game in one sitting. While it is short and sweet, it took me around 15 hours to free up everything.

As for the ratings, graphics-wise it was wonderful, even up close, the fish look decent. I liked the camera angles for the most part when I controlled them, but sometimes the automatic camera angles go awry. Sound was okay, nothing like a little regulator breathing and island music to brighten up your day. Though there were very few actually different tracks in the game, I never found any of the music to be boring...weird.

The replay value is where we start going downhill. When I finished the game, I thought I was just on a regular mission....HA. This left a hollow feeling in me that demanded more. This was not satisfied by the little mini-quests that were generated after you beat the game. The learning curve on this game is moderate. After an hour you should be a pro. People with motion sickness may get a little queasy at times, but it comes with the territory. Just sit the controller down if you feel sick for 15 minutes and do something else. Hehe, you are supposed to do that after every hour of gameplay anyway.

Overall, I was delighted with this game. Though I did give it a B, that is no reason to say it is bad. It is just not A material. A renter for most probably, but if you are a hardcore diver like me, you will get far more enjoyment out of this game than most. However, the beauty of this game is that it can appeal to everyone. Whether you like the thought of exploring sunken ships or just cruising and viewing coral, you may find that Everblue 2 has a whole undiscovered undersea world just waiting for you.
Review Page Hits: 1 today (243 total)
mediahook