FFT Advance is a brilliant tactical RPG filled with entertaining challenges for hours of fun! 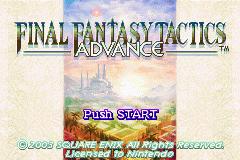 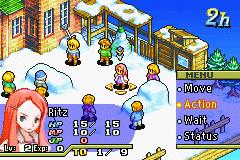 Final Fantasy Tactics Advance is based upon the ideas and gameplay of Square's popular strategy game, Final Fantasy Tactics, released in 1997 for the PlayStation. Square's first game for a Nintendo console in a long time really proves itself, and provides hours upon hours of excellent gameplay. Like the original, the game takes the story, the monsters, and the world from the Final Fantasy series, and places it into a strategy game, while essentially keeping the familiar RPG elements such as improving your character and managing your party. Square has created a great RPG/Strategy hybrid that is incredibly fun to play.

Although the game is clearly based on the original, the stories are definitely not the same, nor do they continue on from where the last one left off. Instead, FFTA introduces us to our new heroes of the game: Marche and his school friends. Unfortunately, the story isn't exactly a masterpiece, and isn't anything along the lines of the more conventional Final Fantasy role playing games. And sometimes you just want to get out there and battle rival clans and evil monsters rather than watching the somewhat dull story evolve.

However, this clearly sets FFTA apart from other tactical RPGs, the story becomes slightly less important, and the major emphasis is on the combat. In comparison with other games in the genre, such as Tactics Ogre (which you may wish to look at if you enjoyed FFTA), Square has introduced some nice elements that make the game easier, such as an easy tutorial based on a snowball fight at school. Unlike the original, as soon as it is your turn, any action you choose actually occurs, so you don't cast a spell, only for the monster to move by the time you cast it.

Every character in your party can specialize in different professions, although it does somewhat depend on their race, of course. Like any RPG, you'll want to choose yourself a well-balanced team with a few warrior-types, a couple of mages, some ranged support, and a healer in the background. FFTA makes creating yourself a well-balanced player a long task, but it is definitely not impossible.

Unlike the original game, FFTA introduces the "Ability Points" system, which seems a little bit rushed and unusual. Abilities can be learned by equipping and using your items that have the abilities. After reaching 200AP (or 100 in some cases), your character can use his new ability whenever. Each battle grants about 50 AP for you to master the abilities. Equipment with good abilities are easy to find, but usually only for weaponry, so generally, you only learn one new ability at a time, and this can take quite a while, and you may be using a lot of your time just gaining abilities.

In order to begin your battles, you can simply pick up the game, walk about, and soon, a clan will appear on the screen. If you're looking for a quick side-battle, away from the storyline, just collide with them and let the tactical fun begin. But if you're wanting to develop the story, then you need to take a "Job". Like the original, jobs can be picked up at the local pub, along with some friendly advice. There isn't much change from the original, and the jobs are pretty much the same, although with a few new inventions.

Another new feature to the game is the "Judge System". Battles are watched over by a heavily armored judge who checks that everything you do is by the books, and players can be punished with yellow or red cards -- red cards meaning straight to jail! This adds something extra to the game, and later on in the game, Anti-Law cards add an extra aspect on to that.

If you have any other friends with a GBA, definitely force them to buy FFTA (or trade for it!) as the multiplayer link-up options can be a lot of fun! You and your friend can fight against each other, or with each other. Trading team players is another option, and you can also find new items and equipment that is only available to you through linking up. Although it's definitely not a reason to buy the game, its a nice touch that adds to it.

The graphics on this game are one of a kind. The isometric maps are well designed and fun to play and everything looks incredibly beautiful. The music is slightly limited (you may even get annoyed at how often the soundtrack is repeated), but it still is really quite good.

Final Fantasy Tactics Advance is a great game, and superior to the last one, with a lot of nice features that makes it one of those "must-buy" games for GBA owners. Although it has its problems, the gameplay speaks for itself. It can provide hours of entertainment and you can play a game whenever you're bored traveling on holiday. Great fun.