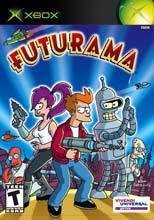 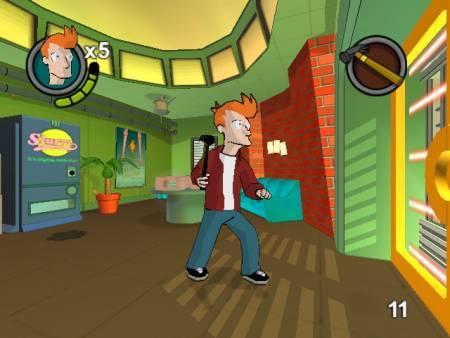 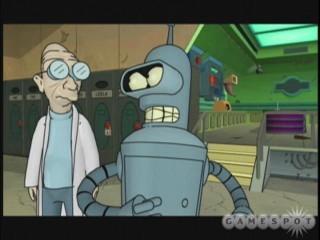 Futurama was one of the greatest animated television creations since its start in 1999 on the FOX network. I remember hearing about it as "The Simpsons 2" and "The Simpsons in the Future." Despite spawning from many of the minds of those responsible for The Simpsons (most notably, creator Matt Groening), it had nothing to do with the aforementioned show. It was better for it. With its blend of "I Love the 90s'" satirical comedy and just about every sub-genre of science fiction, Futurama took to the airwaves. Unfortunately, the show was cancelled by FOX in 2003.

During its peak -- amongst toys, comics and other assorted merchandise -- came UDS and VUGames' video game take. With a script penned by series writer J. Stewart Burns, access to Futurama's media vault (music, sounds, artwork, etc) and the voices of the cast, all UDS had to do was focus on a worthwhile game. Instead, it seems, they focused on flash frying a hunk of 3D platforming rehash and calling it a day.

Split into four and a half parts, Futurama allows you to take control of Fry, Leela, Bender and some alien thing Dr. Zoidberg calls a horse as they try to stop Mom's plan for universal domination. Hopefully you know who all those people are, because the game does nothing to catch up newcomers. The feel of the show is surprisingly solid, with a cel-shaded recreation of the Futurama world and many different remixes of the show's theme. Flyers, posters and ads for items fans will recognize help breath life into otherwise lifeless locales. The only recognizable locale that is playable is Planet Express.

According to the back of the box, each lead character has "their own unique fighting styles." Wow, but they forgot to mention all of them are pulled off half-assed, if at all. Despite a cover that shows Fry, Leela and Bender with guns; Fry is the only character that actually uses them in the game. Through an overly simple (both figuratively and literally) R-trigger auto-aim system, you spend his levels in a run-and-gun state, blasting the crap out of robots and slime monsters. A stubborn camera can be annoying. But, just the repetitive nature of: shoot, move, wisecrack, shoot, jump, wisecrack; drags this portion thin in only a few levels.

"Dropped" onto a desert planet with the task of disabling a tractor beam, you take the role of Super Mario Bendercoot. Armed with a spin-attack, a charge attack and a butt stomp, Futurama's deadpan robot takes on hordes of other robots and purple monsters. To be honest, Bender's levels were something I was looking forward to. He lies, cheats, steals, is all and all, a bad robot. But, the game-play touches on none of those attributes. Instead, he is boiling down into a Crash/Mario hybrid who cracks a funny joke here and there.

From bored to disappointed, my platforming adventure flew all the way to the sun to bring me back to boredom. Leela's levels have her punching and kicking skeletons and magma blobs while avoiding touching the red hot mama of one hit kills, lava. But again, that stubborn camera flops back onto the set. Mate that with a clunky, unresponsive fighting system (I relied exclusively on jump kicks) and a sea of irritating one-liners to give birth to a monstrosity named "why am I still playing this?"

UDS must have realized that it needed to break up all that monotony somehow. Dr. Zoidberg is a wonderful character left on the cutting board. So, right before the final level, they treat us with a bonus level starring the misunderstood lobster. I think the discussion for this level may have gone like this: "Oh wait, there is enough platforming levels and creativity, bah, who needs it. I have it! The Crash Bandicoot game, he rides a pig! That was kinda fun! Let's just flat out rip that off and just like a shot from the spice weasel, our game is spiced up!"

It really is a shame that I had to not only waste hours playing this game, but then I come here and spend an hour or so bashing it. I wanted to like this game. Futurama is one of my personal favorite TV shows, but to say I expected greatness from this game would be a lie. All I wanted was some originality, a slice of interactive TV. Instead, what will rot in my collection is just another abused license.
Review Page Hits: 0 today (140 total)
mediahook