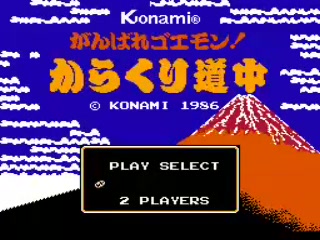 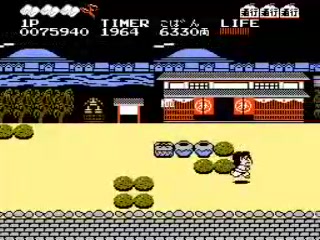 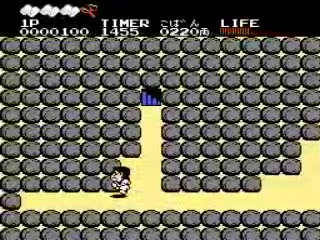 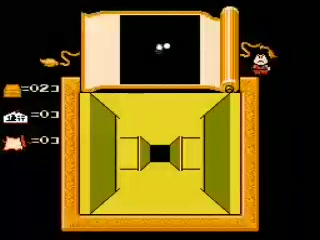 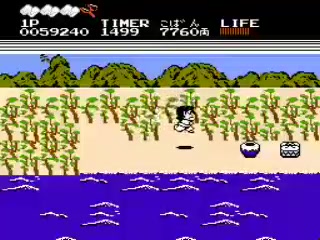 Who exactly is Goemon? Goemon Ishikawa is a legendary Japanese hero equal to that of Robin Hood. His true claim to fame? Being boiled in oil after a botched attempt to assassinate a notorious tyrant in his day. His legend lives on as a folk hero in Japan, and his stories has been told time and again in different forms. One of his more well-known ways is through the video game world. Konami decided to give the story a go, and the game series became very famous in Japan. Unfortunately, only four of his games were released in America, mostly due to lack of knowledge or interest. The game's name means, "Go for It, Goemon: A Tricky Journey."

Apparently, an evil and wealthy leader is harassing the good people of the land, and Goemon decides that enough is enough. Goemon must stop the despot, but the way to the fortress is long, hard, and full of enemies, traps, and pitfalls. Undaunted, the noble thief sets out on a journey to restore peace to the land of Japan.

This game is a treasure-hunting game. You have to go from section to section, smack the enemies with a kiseru (a Japanese smoking pipe that doubles as a weapon), and collect 3 white bills in order to complete the level before you run out of time and energy. You also have to collect money in order to buy items and upgrades, such as a slingshot which shoots coins, sandals that let you run faster, a straw hat that protects you from certain "bombs" that the birds throw at you, better armor, and the like. Sometimes you'll jump over stairways that has caves containing treasure and a stairway to another section of the level. You'll also find houses that sell upgrades and food to replenish your health, people that give you somewhat useless information, and a maze that contains a white bill, money, and an occasional 1up. Each level is designed differently; you'll travel through towns, forests, mountains, small islands, and, of course, the fortress. The levels are no cake walks, either; you can get lost easily, and you'll have to find items far and wide in order to survive. The mountain and small island levels must be mastered with timing and dexterity or you'll lose all of your lives in one place! The enemies will literally come at you, and it's very easy to get lost. Unless you're playing a translated ROM, everything is in Japanese, so you've got to know what you're doing in order to survive.

The sprites and landscape are usually what you might find from an ancient Japanese painting. Farmers, guards, hogs, birds, ninjas, masked idiots, and every other oriental weirdo wander or fly aimlessly on screen, and there is a sense of parody in every character, including Goemon himself. Each level has its own unique charm, from sandy beaches to high mountaintops.You'll also find references to other Konami games if you look hard enough. Who would've thought shooting down a bird or a Tengu looked so cool?

The music adds to the charm and hilarity of the game. The music is naturally based on Japanese folk music turned into 8-bit, and is surprisingly good! The town music make you want to hurry, the forest music goes a little off-key for periodical emphasis, and the last level is spot-on! It's amazing how folk music can be pushed to its limit?

This game has a definite warmth and charmth to it all. The characters are funny, the music is way ahead of its time, and everything is designed to make fun of Feudal Japan. If you can excuse the difficulty and language barrier, this game is an import well worth the time and money. This is proof that, if the right things were made by the right company, games based on famous people can be a timeless hit.
Review Page Hits: 0 today (367 total)
mediahook