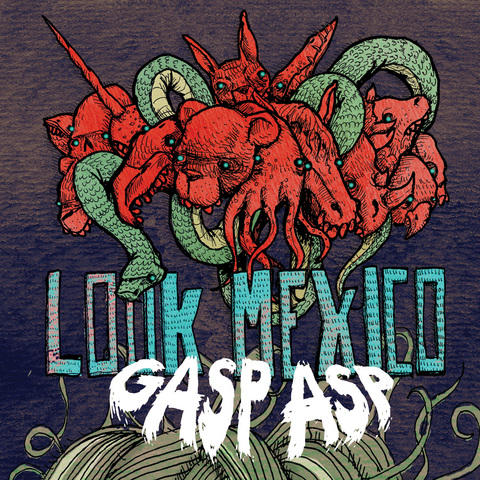 I first caught wind of Look Mexico with their excellent cover of the yacht rock classic from Looking Glass, Brandy (You're a Fine Girl) from the first Under The Influence split (which they shared with Fake Problems), treating my ears to one delicious snack of smooth sound. But, in the end, it was only that, a snack. When the chance to review their next batch of new songs, taking the form of the Gasp Asp 7", my musical palate began to salivate. With the passing of each of the three urgency-tinged rock nuggets found here, these Florida boys make a very convincing argument as to why it should be them, not Fake Problems, who are the top band from their split record.

Gasp Asp opens with the rousing track, You're Not Afraid Of The Dark, Are You?, which shows off all of the best aspects of Look Mexico at the same time (hence why it is being pushed as a single): energetic drums, beautifully layered guitar work and fabulous songwriting. The inclusion of the string section only pushes this track further into the awesome stratosphere. Don't You Dare, with an opening guitar lick that reminds me of Incubus's Sick, Sad World is my favorite track of the album. Josh Mikel's drumming is spectacular, and for me, it stands out very boldly on this track as he adds a sense of pressure to the song that really brings the whole thing together. When I hear the lyrics, "can't seem to cool down this feverish hand", it is Josh that makes me feel that duress.

The mixing of this album is, without a doubt, utterly brilliant. I listened to the album one time through with headphones after listening to it multiple times through speakers and I was dumbfounded at the difference the intimate connection between sound and ear created. This is no more evident than on the third track, I'm Not Guilty, But I'm Used To It, where the various guitar parts flow in and out of each other, converging into a power of sound long enough for you to notice when they diverge paths and share a different voice in each ear. It is as if guitarists Matt Agrella and Ryan Slate each wanted to share with me their interpretations of the same secret at the same exact time and only through their simultaneous cooperation was I able to comprehend them.

Once Gasp Asp came to an end, I found that I had to flip that record right back over and give the entire thing another listen. The act of restarting boiled over to my computer, as I just kept rocking the MP3s even though I didn't need to listen to this album anymore to accurately write my review. Which right there is really all that I needed to say about Gasp Asp - it is infectious like the flu but pleasuring like a back massage. I'm a man who is difficult to stupify with music, let alone with me having only heard five of their songs, but Look Mexico has proven to be an exception. Please box my ears black and blue with new music ASAP - thank you.
Review Page Hits: 0 today (99 total)
mediahook