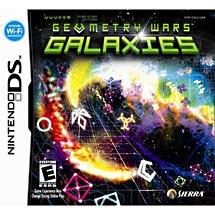 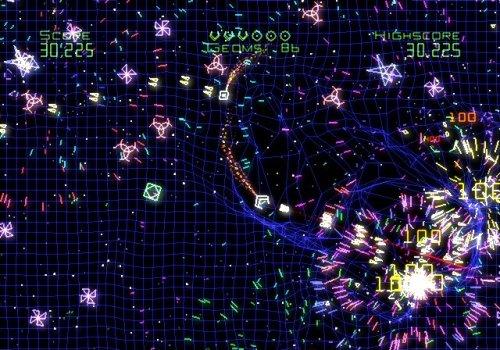 The first thing I can say about Geometry Wars: Galaxies, is that it's one of those games that comes along, that you'd think would be boring after a while, but once you play it, you're hooked, and you don't want to put the controller or console down. Galaxies fits that description to the very letter.

The second thing I can say about Galaxies, is that it's unique. No, I don't mean there has never been a game similar to it, or that it's a different size or shape, or color, or anything like that. I mean that the gameplay is unique. Well, to the point where you're not seeing the same outcome of playing through a level twice. You're always going to see something different. The enemies, baddies, etc. are the same, but there are many types of them. The types of enemies changes the behavior. Some rush at you, some flee when you shoot at or near them. Some just bounce around randomly. But it's the combination that's the unique thing. Enemies spawn randomly, at random places on the level. It's always a different game when you play. You get used to what appears, but not when. Galaxies has a simple plot, with simple objectives, but the gameplay keeps you on your toes, and keeps you from putting it down.

But maybe I should describe what you're supposed to do next.

Galaxies doesn't really have a story, but it's pretty simple what you do. There are galaxies in the solar system, each galaxy representing a few different worlds (levels), and you have to complete each world by getting a certain amount of points, which you get by destroying enemies. You are armed with a machine gun-like blaster, and a Drone. Drones can be customized by buying behaviors, which determine what they do. There are several things they can do, ranging from firing at enemies, luring them away from you, circling around you and protecting you from some (but not all) direct hits, and so on. As you use each behavior more, it gains EXP and levels up, becoming more useful at what it does.

As you destroy enemies, they drop objects, called Geoms, which you use to buy behaviors and new worlds and galaxies, and they also increase your score multiplier in a level, up to 150X. Some worlds and galaxies are locked, and you must purchase them. Collecting Geoms from fallen enemies will get you a few Geoms, but the real bonus is completing the worlds with higher medals. Bronze awards you 25,000, silver adds 30,000 onto the 25,000, and gold adds 40,000 onto the 25,000 and 30,000 you got from Silver and Bronze. But for higher medals, you must earn a higher score.

In each level, you have a predetermined amount of lives and bombs, which, when fired, unleash a massive wave taking out all nearby enemies. Some levels start you out with 3 of each, some with 1 life and no bombs, some with 3 lives, no bombs. But you can gain more lives and bombs by getting higher scores. You lose a life when you are hit by an enemy. When you die, you also lose your multiplier.

Like I said, the game has amazing variety. Enemies vary by level, and level shapes are different, too. Some levels are wide-open fields, some are like mazes. It varies by level, but each provides a challenge.

That explains the gameplay. Onto the review

Graphics 4/5
For the DS, the graphics are very nice. Only thing is, frame rate goes down a bit with lots of enemies on-screen. Not much, though.

Sounds 4/5
Music-wise, it's a few different tunes depending on the level. But in this game, the actual sounds play an important role. Since different kinds of enemies do different things, it helps to try to memorize what each sounds like when it spawns so you know what to expect.

Gameplay 5/5
Brilliant, fun, addictive. The praises for a game like this could go on for some time. It will take a LONG time for me to get bored of this game.