Simply a must-own for any PSP user or God of War enthusiast. 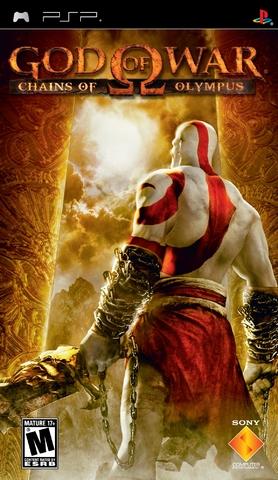 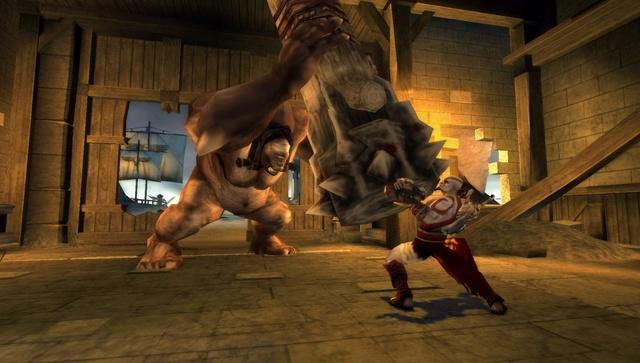 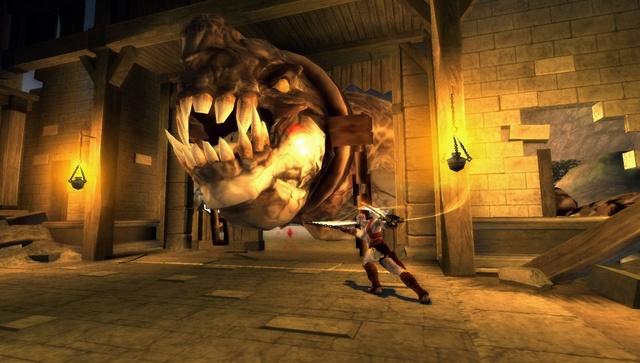 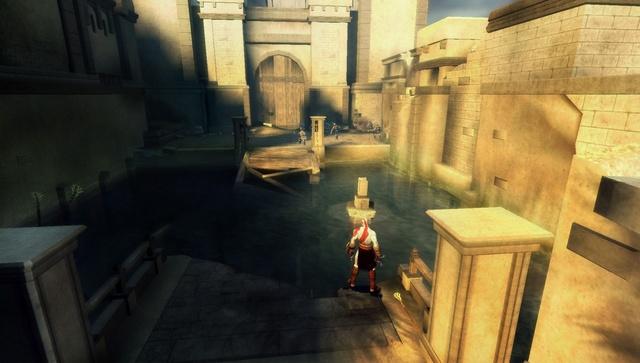 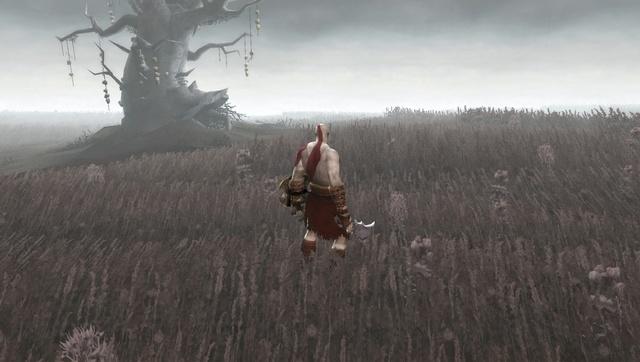 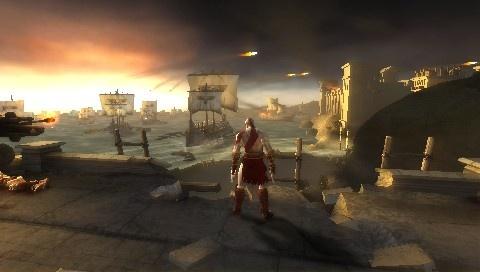 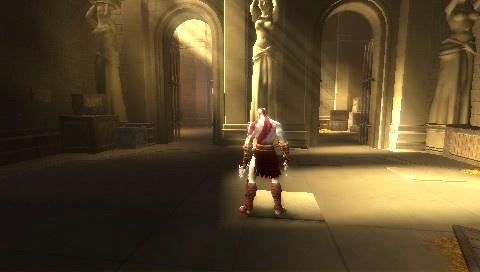 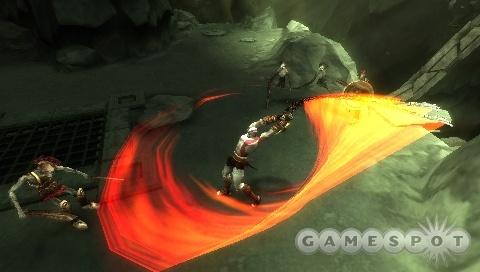 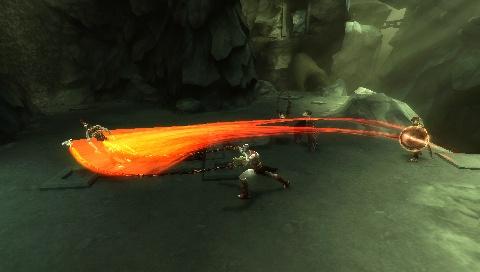 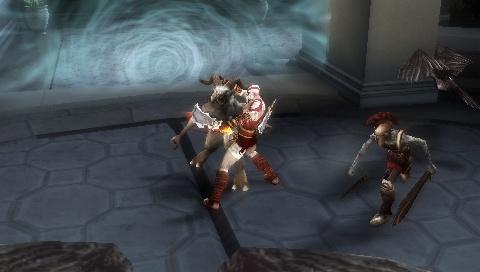 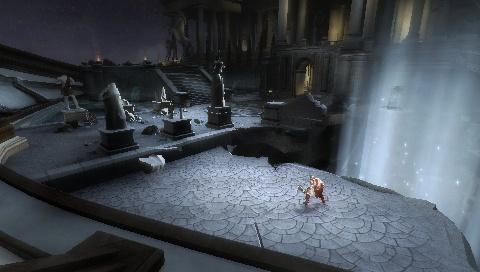 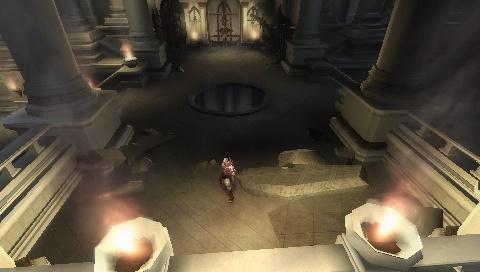 The Cover art is of course a prelude to the opening battle of the game, and of course showcases the dark Greco-Roman style of the game. The preview that shows up when I popped in the UMD just got my mouth watering, and I couldn't help but fire it up.

Of course, this is a third person, action-adventure-puzzler colossus with classic God of War controls, almost button for button. I initially thought that I would miss the second thumbstick on the PS2 controller, but quickly I noticed that this just wasn't the case. The controls were smooth, well thought out, and worked well with the game, especially in those quick little interactive action sequences that require player input to finish off an enemy. Kudos to Ready At Dawn for the flawless controls port.

The game begins with Kratos in a building on a Persian shoreline, and after some quick control introductions (introduced through battles with a large group of enemies inside the building), Kratos is immediately cast into a battle with a huge basilisk trying to wipe him out. After a couple thwacks and a finishing sequence, the beast scurries along, running through the hole that the it ripped into the side of the building. As Kratos breaches this hole, the player sees an epic land and sea battle underway in which massive balls of flame rip right past and inflict small amounts of splash damage. Make it through the gauntlet, clear some enemies, and dive for the comforting feeling of the yellow beam of light (the infamous save point).

The game just gets better from there. The tried and true power-up procedures are still in place: blue orbs to restore your magic, green orbs to restore your health, and red orbs to upgrade your weapons/learned abilities. There are also the Gorgon eyes and Phoenix Feathers for increasing your max health and magic capacities, respectively, and this time, you only need five of each per power-up (as opposed to the 6 required in the console versions). I notices that towards the end of the game the orbs began to lose their importance because of their abundance throughout all of the levels. I easily had all of my stats and abilities maxed out well before the last level which made the devastation of enemies that much easier.

Kratos' basic weapons are the Blades of Chaos, and the typical whirlwind type moves, dramatic slow-motion crashes, and devastating blows are thankfully still very much a part of the gameplay. As you progress through the game and defeat bosses, you'll find that Kratos picks up a few very useful weapons that prove to be the key to winning the final boss battle. Besides the Blades of Chaos that we all have come to love, Kratos picks up the Sun Shield which can reflect long-ranged enemy attacks, the Gauntlet of Zeus, a massive right-handed weapon capable of crashing through the toughest of armors and the thickest of walls with a few different combos, and The Efreet, which is a more of a "magic" weapon but nonetheless ridiculously powerful when you find yourself in the middle of an all-out onslaught. In addition to these weapons, Kratos picks up the ever-powerful Light of Dawn which, when Kratos stands in the right place noticeably marked, can harvest the power of the sun and launch it at enemies. It is also used to reflect light around a puzzle in one of the levels. Finally, the seemingly hard-to-use Charon's Wrath. This weapon is ridiculously powerful, but it seems like it's power is balanced by difficulty in use, as this weapon must be aimed to get it's full effect. These weapons are very satisfying in the games and prove to be very useful throughout the entire game.

Progressing Through the Game

The first thing you'll notice is the frequency of power-up opportunities. Kratos quickly gathers massive numbers of orbs, eyes, and feathers, giving him unmatched power in the game. the initial difficulty level seems rather easy compared to the console versions, and I believe this is the reason why. Of course you'll encounter a monstrous enemy here and there that will take a few hits and a finishing move to dust off, but it's nothing that an experienced or even amateur God of War player couldn't overcome. Without revealing too much, I was really impressed with certain parts of the game that involved the final boss scene, and Kratos unchaining the gigantic Atlas. It was very cool to watch the cause-and-effect aspects of these particular parts, and things like these are what take games to that next level.

The player will encounter some particular enemies that are simply not effected by normal blade damage, and a shield-breaker combo is quickly introduced. A three button sequence, this shield-breaker proves to be not only annoying, but rather tiresome if multiple shield-yielding enemies appear on screen. While you generally get used to it, it isn't a matter of increasing the games difficulty with the combo- it makes the player have to remember each and every time a shielded enemy appears the sequence of buttons, pull of the sequence accurately (which wasn't always the player's fault if done incorrectly), and then finish off the enemies before, in some cases, the shield magically re-appears. But enough about that- let's move on to the theatrics.

Something that really makes this and all God of War games stand out is their epic cut scene narration, graphics, and artistic creativity. I really enjoyed watching each and every one of them, especially the final one (REALLY holding back for spoilers' sake here). Let's just say that there were some well-placed cut scenes that grabbed your attention instead of just a poor excuse for a loading screen cover-up.

As can be expected, there is a fair amount of unlockable material once the game is beaten on any difficulty, including concept art, the ability to review the cutscenes from the game (I did this a couple of times because of the quality of the cutscenese), an introduction to those who made the game, the Spud of War costume which makes your magic bar grow, and of course a difficulty-amplified mode on which the player can play through the game. Called The Challenge of Hades, this grueling gauntlet of fire and blood that Kratos wades through to try and retrieve the skull of the architect's second son is not only incredibly fun, but also incredibly difficult. In completing the Challenge, Kratos gains some incredibly destructive and dominant powers from Hades and these powers can be used (if you play through the game again) to summon the army of Hades to do your bidding, good or otherwise.

God of War: Chains of Olympus is a must-own for any PSP user or God of War enthusiast. This is definitely at the top of the list for 2008 games, and could possibly reign supreme on the top of the PSP library in general. Pay close attention to the lessons learned by Kratos: missing this game is a sin punishable by indefinite servitude to merciless Gods. §