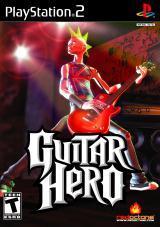 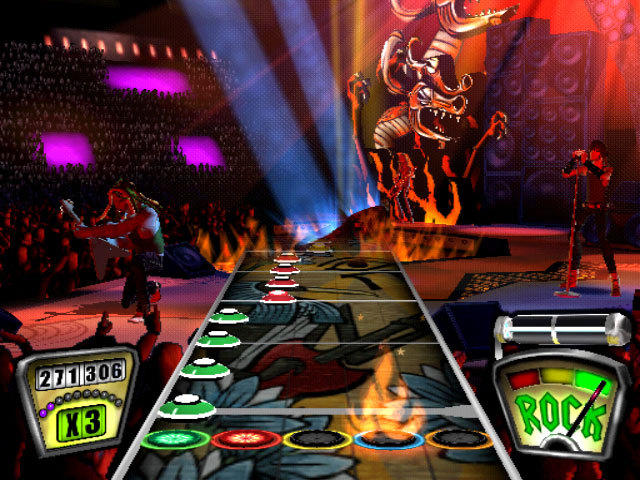 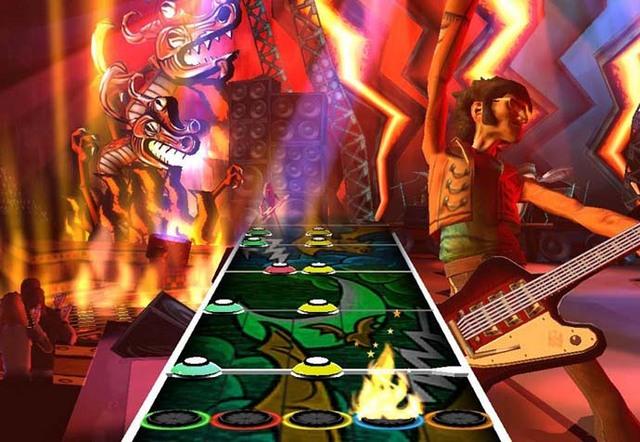 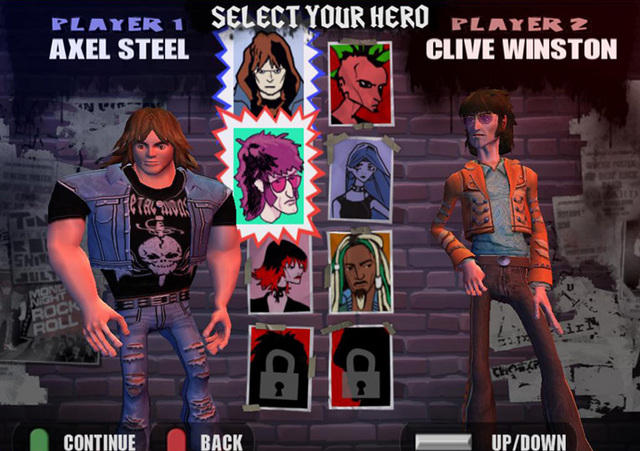 Anyone who has stayed up late watching TV should know where my title is derived from. If only the folks behind Guitar Hero's marketing had indulged in a late night infomerical! It would be a lot like those rock compilation CDs for those who have never heard of an mp3 or burning your own CD mix. Like Monster Ballads, or Redneck Anthems, or even If You Are in Love with Crappy Hair Metal and Are Still Awake at 3AM, Chances Are You Are Wasting Your Life Ballads - on cassette and compact disc!" There could have been rock star testimony, maybe Kip Winger or Gavin Rosdale could have given a washed up rocker thumbs up in-between that all so important 800 number flashing at an epileptic speed. Then some douche bag announcer could drop to his knees and beg you to pick up the phone by offering to split your payments in half if you call in the next ten minutes, even though no informerical has ever made a commercial for the post ten minutes price.

Except, while you would normally (I hope) chuckle at the absurdity of most infomericals and change the channel with absolutely no intent on purchasing the advertised item, you would run for the phone to buy this game with expedited shipping! But that scenario never happened, so this review will have to do take the infomercial's place.

For those of you who have missed the entire Guitar Hero phenomenon, it is essentially a rock guitarist simulation. Packaged with the game is the required Guitar Hero guitar controller, which is the size of a child's electric guitar. Instead of strings, there are five colored buttons on the frets, a strumming wedge (so no picks), an attached whammy bar, and a start and select button. The first time I pulled it out of the box, I found it small and silly, not sure that I wanted to be seen holding it. Let me say, one round with the game and you forget how silly you may look. If you are still feeling tentative, try a sweet Motorhead decal on the front. No one will question your manhood with one of those! Those worried about how fragile the controller is, don't be. This thing is solid and well-designed to take thrashing after thrashing. Though I wouldn't recommend getting lost in the moment and bashing it against the ground - I don't think it can withstand that type of punishment.

Once you get past the controller and actually plug in the game, you'll find what is easily one of the PS2's greatest single player and multiplayer titles of all time. Gameplay is much like any other music-based title (any DDR game and Taiko Drum Master, for example) where you match an action by you with some sort of icon on the screen to licensed songs. In this game, the musical notes, displayed as colored circles, are displayed in a down river flowing strip that ends at the bottom of the screen. Once a note reaches the bottom of the screen, you hold down the colored fret button matching the color of the note and strum on the strumming wedge. If the note has a line after it, that means you hold the fret down until the note's line ends. These are also when the whammy bar comes into play, as you bend the note as you hold it. Each note you hit raises your rock meter into the green, missed or wrong notes send it to the red. Mess up too much and the song will stop. If you beat the song, a score is given based on notes hit and combos.

If you have ever played a guitar before, no matter what level of experience, this should all seem pretty easy to grasp; for the guitar (or even musical) virgins, a solid tutorial along with selectable difficulty allows anyone to learn and play this game. My parents, who play close to zero video games and musical instruments, were able to play easy mode; trust me, that's saying a lot!

"Who cares about the noobs?! I want to rip holes in the atmosphere with my rock prowess!" While this game has a great learning curve for beginners, there is no shortage of difficulty for everyone else. As you go through the four difficulties in single player, unlocking new songs, new venues and earning money to spend on guitars and more tracks, each one brings you closer and closer to playing every single note in the songs, all at the right tempo. That may not sound like such a big deal to some, but you'd be surprised (I know I was) how layered, deep and complex most of these guitar parts are!

That's where the fun comes from, trying to master these songs on hard and expert, getting the top score. Things get crazy oh so fast. No matter how good you think you might be on easy and medium, hard and expert are there to hand you your ass in a plastic bag. These difficulties take no mercy, blazing in speed when compared to easy and medium and full of the orange button. The orange button is the button closest to the guitar's body and is the hardest to hit without moving your hand. It will be the bane of your existence. Despite the challenge, attempting to master each song and score the highest score provides almost an endless amount of playtime (unless you are damn, damn, gosh darn good), with playtimes lasting a couple songs before work or a couple hours until your hands hurt.

But as they say, misery loves company and this game is set up perfectly for old school, controller passing sessions. My ideal playing situation is a room full of people, each one taking turns at a song, trying to grab that top score. I've been at parties where the whole crowd ends up around the TV and lines 6, 7 people long form for a chance to rock the axe! That's not even touching on simultaneous multiplayer, which has two players echoing each other in almost a guitar duel. It is a bit flawed though, since both players are essentially sharing the same track and there are no spoils to be had other than the initial win or defeat (such as a running score or win tally). That's why I prefer the high score battles, but that's not to say that duels are lacking fun; they are just lacking depth.

While it is impossible to please everyone out there with the track list (though that won't stop you from constantly adding to your own personal want list), what is here is a great mix of rock music. 30 tracks were licensed from famous bands such as Motorhead, Bad Religion, Black Sabbath, Queen, Franz Ferndinand, Pantera, Cream and more (see the complete list at the end of this review) and re-recorded by new musicians specifically for the game. This had to be done because the developers were either unable to create the game track they needed from the original source or they just weren't given permission to use the master tapes. Unlike Taiko Drum Master, which houses some awful cover songs, the folks behind the music here did a fantastic job mimicking the source material, though the Sum 41 and Incubus vocalists are pretty damn bad. But the music is always spot on. I also consider it part of the game that the songs have been re-recorded, since you are in a band trying to strike it big. Makes sense to me.

As someone who didn't go out of his way to listen to a good chunk of these tracks before playing Guitar Hero, I found myself really only disliking one track (The Exies' Hey You is a musical bowel movement). I have since grown fond of many of the classic tracks to be found here. As long as you are opened minded about your rock music, you should have no problem sliding into the tracklist and getting the most out of it.

Along with the 30 licensed tracks, 17 tracks by indie bands are unlockable. These are not covered, and are the actually bands' music. Doesn't really matter though, since nearly every one of them are throwaways. It is a nice idea, and allowed a lot of people involved with the game to get their bands some notability, but not one of the tracks holds a candle to the licensed songs. It's sad too, because the concept of giving some lesser known to unknown bands the chance to have their music heard by a large audience is awesome. There's always next time, I guess.

I was trying to think of a way to squeeze in something about the graphics, but to be honest, they don't matter. If you are playing, you are not paying attention to anything other than the notes. If you are watching someone else play, chances are you too are just looking at the notes. That said, what is there is adequate, with goofy rock star personas to play as, a complete band always on stage and different venues to play at. The random artwork found on loading screens, song select page and more are creepy, curious and altogether awesome. It's a shame that art direction couldn't have been taken a little further within the game itself. I do love how the character you select actually plays the guitar part, no basic animation on repeat. It's a shame that I can't say that for the rest of the band, especially with the drummer. An out of time drummer can become a distraction, but thankfully the camera is constantly changing angles.

No matter what I say about this game and how great it is, there is nothing that can truly explain the experience this game provides. It is something that has to be experienced firsthand. There are very few non-online games that people claim to play on a pretty consistent basis - and this is one of them. I've been playing it consistently for eight months now and I am not sure I have ever played a game like that. If you are a fan of rock music, especially if you are in a band or play an instrument, no music game can drag you deeper into its cave of rock like Guitar Hero can, does and will for some time to come. Nor have I come across a game that takes over a party week after week like Guitar Hero.