The History Channel: Battle for the Pacific (Xbox 360)

Another WWII shooter, another day wasted playing a low budget game. This game doesn't offer anything new or creative but does offer a lot of backtracking in its 'already short' missions. 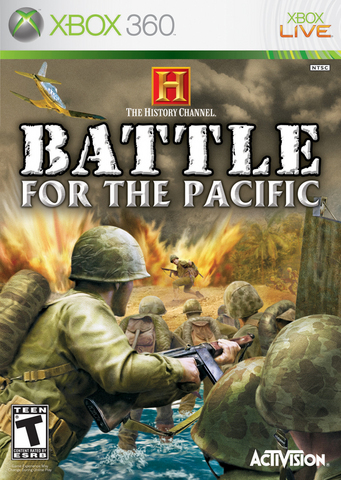 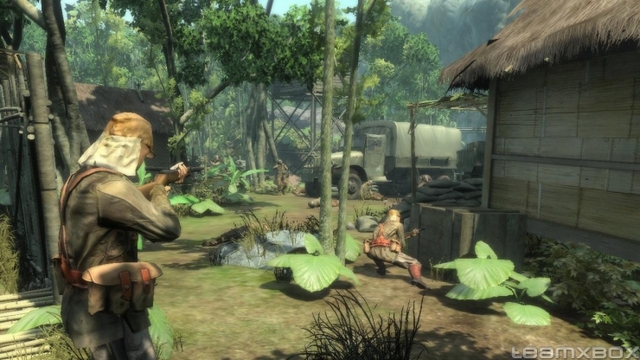 The History Channel: Battle For the Pacific puts you in the shoes of the U.S. military as you fight to capture Guadalcanal, Iwo Jima and other historic battlefields of World War II. The entire game takes place in the Pacific region as you fight a very unorganized Japanese army through various missions.

First off, the missions are horrible and very short. Even on the hardest difficulty setting this game will take you around 2 to 3 hours to complete. Not only is the game that short, but most of the missions have a bad habit of making the player backtrack through previously secured areas only to have to fight waves of enemies after you've already cleared that area. It is noticeable right away and quickly becomes old and boring just like the missions and level design. By the time you reach the second or third level you will want to put this game down and pop in another shooter game. The levels don't offer any memorable moments, once you finish a level you will have forgotten everything you just did.

The sound is another thorn in the game. Explosions from bombs, mortars and grenades barely feel explosive. They don't offer a wide radius either; I threw a grenade in the middle of a group of enemies and only one of them died from the small blast. The fire and debris from bombs and explosives look very cheap and unexciting. The visuals are so generic that it's not even worth to stop and look at it. The guns, although from the WWII era, feel like toy guns with no power whatsoever. The sounds of the bullets even make a toy gun sound real as they shoot into the distance. The voice acting is probably one of the worst things about the game, it is clearly seen that the actors are reading a script as their voices sound lifeless, and regardless of what situation is happening during the sequence, they have the same tone of voice throughout the dialogue. Whether they're in cover, trying to shout over gunfire and planes or just conversing, they have the same cheap tone.

The targeting does a horrible job of detection also. When firing a weapon you can have the gun pointed away from the enemy and still be able to shoot him. Also when manning turrets or defusing mines you have to press "Y" button but you have to hit the button in the exact spot or else you won't achieve your goal. Most times you will stand there moving the analogue stick back and forth trying to find the right spot just to do a simple task. The controls sometimes are a bit awkward as far as your character moving is concerned. Sometimes he turns to the left or right at a very slow speed and the player can't crouch. Crouching and ducking behind cover aren't big issues though because as I mentioned earlier this game is insanely easy and can be beaten on the hardest level in about 2 or 3 hours.

The AI does a lousy job in this game. Enemy and friendly AI will rarely take cover and shoot from the middle of locations instead. Friendlies will also stand around and do nothing as you continue to take bullets from enemies as you try and pick them off one at a time. Also you can never do anything without your commanding officer with you. If you stray to far ahead or too far back the mission will end very quickly. There are many times when he will just stay in one spot and not move, forcing you to wander around or travel far distances just to fail the mission and begin again. The weird thing about your AI buddies is that no matter what happens, they won't die. You will always have the same partners with you the entire mission. Another thing I hated about this game is the enemies routinely spawned behind you after you just cleared that area. If you're advancing, say north, and you just cleared one area, be careful when you move forward because more enemies will begin shooting you in the back. This happens way too many times and just slows the game down some more.

There are some parts I must warn you about though. Whenever there are mortar attacks the screen shakes a lot so you might feel kinda weird for a while. Every time I experienced the mortar attacks I always felt nauseous because of the violent movements it causes. Also this game has no incentive to replay it after you've completed it and there is no intel, powerful weapons or upgrades to collect in the game.

This game does offer online multiplayer for up to 12 players but I have yet to see one other person online with this game so chances are you will never get to experience this part of the game. The only good thing about this game is that before you reach a new area there is a brief history narrative while the level loads, it isn't much but it gives you a sense of what really went on during that particular battle.

Overall this game is horrible and shouldn't be played, regardless of the price. Every aspect of the game is what brings this game down as one of the worst games ever made. It is by far the worst experience I've had in a game. The only possible explanation somebody may have to playing this game is to boost their achievement score but because of the lack of people on multiplayer the most you can get is 460 points. Other than that you should stay away from this game at all costs.
Review Page Hits: 0 today (223 total)
mediahook