Rage Against the Machines 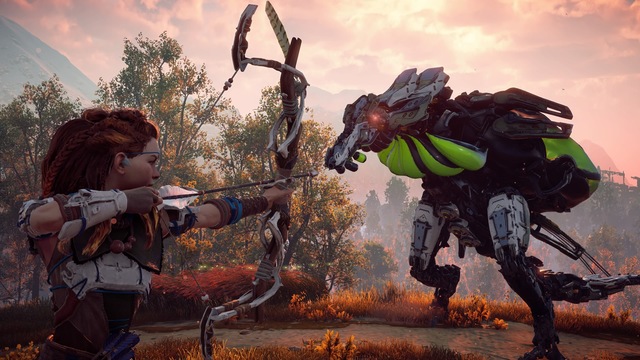 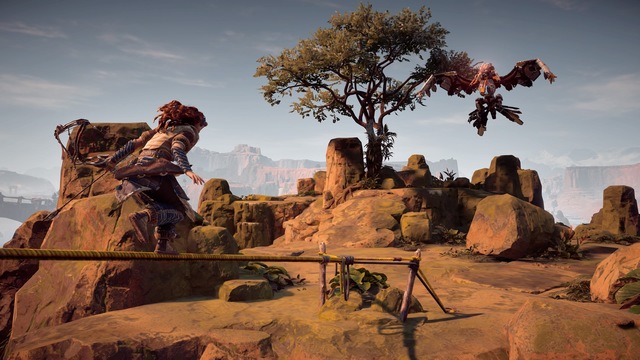 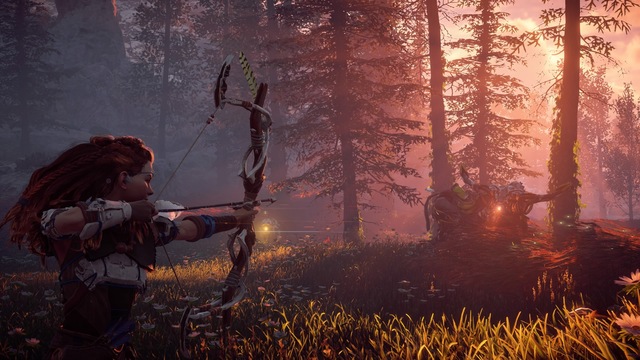 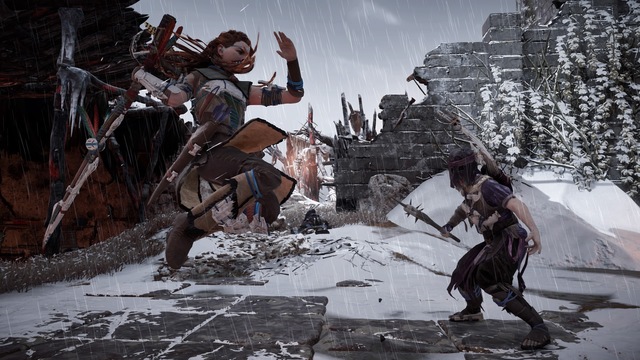 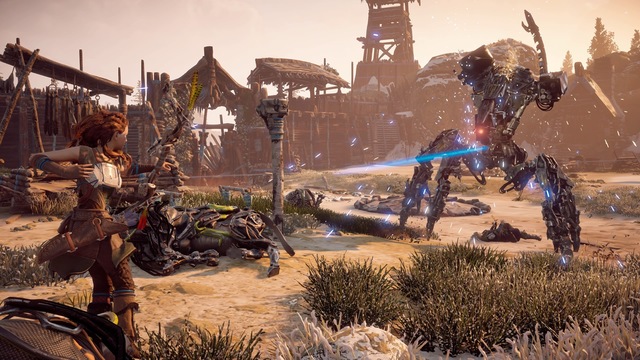 For what seems like eons, Guerrilla Games has been stuck working on the Killzone series, Sony's answer to Halo and Call of Duty. While the series has had its own success, many PlayStation fans were wanting to see what else the Killzone developer could come up with. Seeing as their first end result is Horizon: Zero Dawn, an exciting open world adventure set in a post-apocalyptic machine-ruled world, maybe Guerrilla Games should have moved on from Killzone ages ago!

Horizon: Zero Dawn tells the story of a world set in the distant future, ravaged by an unknown calamity that completely took humanity to the proverbial cleaners. Now, survivors live in the most basic of tribes and constantly face the threat of hostile machines. The heroine is Aloy, a child born under strange circumstances and taken care of by an outcast, Rost. Because of this, her fellow Nora tribesmen and women treat her with utter contempt, prejudice, and refuse contact. When a young Aloy falls into some ancient ruins, she comes across a unique device known as a Focus that allows her to not only increase her powers of perception but also gives her the ability to interact with machines.

Events that follow give her the desire to find her true mother, and Rost trains her over the course of her adolescence, as she can only ask the Nora Matriarchs the truth about her mother if she survives a ritual to join the Nora tribe. The game fast forwards time to Nora as a young woman, ready, willing, and able to complete the Proving ritual and uncover the knowledge behind her mother, and, unbeknownst to her, soon the knowledge as to what caused the calamity that wiped out humanity so many years ago.

Horizon's main quests follow Aloy's journey from the Proving to finding out her place in the world. The beginning is so focused and strong, so it's a bit of a bummer that the story doesn't maintain that level of quality the whole way. It drags a bit here and there before ramping back up to a satisfying conclusion. Side quests are another story (no pun intended), as these aren't very enjoyable to play through. They all sport one of the following scenarios or a combination: using Aloy's Focus to follow the tracks of someone, getting an item of some kind, or defeating enemies. There's little variety, and most of the time I found myself just fast traveling from one campfire to another to complete side quests as quickly as possible. I couldn't have cared less about the side characters as they weren't really intriguing, unlike the main story that set its hooks in on me early and never really let go.

The open world setting of Horizon is gorgeous and breathtaking, from gazing upon hazy mountains and vistas in the distance to taking an up close glimpse at the bark of trees and collective grass blades on the ground. It's just a shame that the game sports a seemingly thrown-in checklist of things to do to add to its longevity in this open world. Whether it's metal flowers to pick, vantage points to climb up to and uncover, or ancient relics to discover from piles of debris, there is a lot of stuff to acquire in the expansive world of Horizon. There's even the must-have feature seemingly taken from Ubisoft games of all titles, towers that show the areas of nearby collectibles. Except rather than stationary targets they are roaming, docile machines that must be jumped onto from a high point, scaled, and then overridden to accumulate data. That said, finding stuff is indeed fun.

When you're discovering new towns and campfires (both serve as fast travel points while the latter serve as quick save and manual save points), you're most likely to come across a hostile machine or two. Some are harmless creatures (though they will get rowdy when provoked), but most thirst to cause any trespasser in their territory a terrible time, and possibly their life. Thankfully, Guerrilla Games have given Aloy a multitude of means to take out machines no matter how big or small. From traps that can shock and stun any machine that crosses over them to holding machines down with ropes to temporarily stop them in their tracks, Aloy can use brains over brawn, but when it comes to pure muscle, she has her trusty bow and arrows, as well as a spear.

Sometimes, though, Aloy might not want to get the attention of an entire horde of Scrappers, for instance. If that's the case, she can use tall grass to hide in, toss rocks or whistle to lure nearby Scrappers to her location, and when they're close enough-- wham! Stealth kill! ...Or for stronger machines, a considerable decrease to their health. It's fun to pick off a swath of machines one after the other until there's nothing left. Aloy's Focus can be used by pushing in the right stick. This allows players to see the paths that each prey takes as well as their weak points. Dealing damage to these parts takes off more health from them than hitting anywhere else. With enough power, special pieces of each machine can be shot off, and Aloy can get stronger arrows which have the job of more easily blasting them off. Some pieces can even be used as weapons against the machine itself, such as the Disc Launcher of a Thunderjaw, one of the most powerful machines in the world of Horizon.

There's nothing like rolling away from a rushing Ravager while flanking the machine, slowing down time to unleash an arrow or two at its weak points, knocking some of its topside weapons off of it in the process. Each machine requires a different approach to it. Simple Watchers can be taken out with a well placed arrow to their eyes or a few spear thrusts and slashes. Meanwhile, something like the Stormbird is a battle of endurance, taking out each one of the capsules on its wings to make it crash down to the ground where Aloy can go to town on the avian machine.

Still, there is an annoyance to be found with facing faster machines. It can be difficult to see the direction in which Aloy rolls away from an attack. It's easy to lose sight of an enemy, especially quick ones. I wish there was a way to lock on to a specific enemy like in a 3D Zelda game where the foe would always be in Aloy's sight.

Nonetheless, other times Aloy will want to even the odds, even if by just a little bit. After all, why should she have to do all the work? By moving close to a machine not on alert, Aloy can use her spear to override it. This process takes anywhere from a second to several seconds depending on the machine type, and she can be interrupted by an alerted machine. What overriding does, however, is make a hostile machine turn friendly, suddenly attacking its brothers and make the odds all the more fairer. Some machines can even get mounted, making for quick coverage of ground or a means to attack other hordes. That said, Aloy starts out with a limited number of machine types she can override. As she ventures into optional Cauldrons, cavernous dungeons, she can access new functions to her spear that allow a greater number of machine types to override.

Making machines friendly is an option, but if not, then the goal in the heat of battle is to just make them scrap. When this happens, Aloy can scavenge and salvage the remains, picking up materials to be used to upgrade things in her inventory, such as how many weapons and resources she can carry. Aloy can also use resources found from fallen machines to receive a great amount of weapons, armor, items, and more. These are traded to various merchants throughout the game world, whether they be in settlements or sprinkled about in the wilderness.

Outside of machines, there is another type of enemy in Horizon, and that is humans. These encounters happen during bandit camp raids, which are optional, but also a lot during the story missions. It's in these battles where the complexity and depth of Horizon's combat merely turns into a standard third-person shooter. The enemy AI on display from humans isn't too impressive, offering only the most basic of tactics. They won't try to flank Aloy, they won't try to outsmart Aloy. They will merely hide behind the occasional cover or just stand out in the open, firing arrows or running at Aloy for a melee attack. While I didn't feel these types of combat situations heavily brought my experience with Horizon: Zero Dawn down, they weren't the highest highs of battles in the game.

General exploration is enjoyable, though I never really took time to really learn the world because of a combination of how easy it was to fast travel between locations (depending on how far you are from the fast travel spot is how much longer the loading will take) and the UI always showing the path I needed to take in the open world to reach my destination. The real fun came from the aforementioned collectibles of sorts that made me have to discover ways to reach my destination or find a hidden doodad in a specific zone of the map. Horizon has some Uncharted-like platforming in the game, though this is just as basic as its inspiration. Aloy will automatically grab ledges, and these are always plainly marked compared to the rest of the environment, so you really have to try to miss a jump.

Horizon: Zero Dawn has some RPG elements to it, though they aren't particularly strong ones. Through defeating enemies and completing quests, Aloy gains experience. When enough experience has been gained, she earns a level, gaining more health and skill points. Skill points can be spent in one of three categories of skills. There isn't too much to think about here, though, as eventually you'll have more than enough skill points to learn everything. The skills themselves are helpful, offering things like greater stealth, the ability to power spear-based attacks, increase machine override time, and so forth.

As you've seen, there are some elements of Horizon: Zero Dawn that I'm iffy on, but what I'm absolutely not is the presentation. After Naughty Dog's utterly jaw-dropping visuals with Uncharted 4, Guerrilla Games throws the gauntlet down even harder with a beautiful and glorious graphical tour de force. From the delightful day and night cycle, weather system (the rain is killer!), fantastic lighting, lifelike human characters, impressive special effects, and everything happening on screen at once, there is little to dislike here. Maybe the 30 FPS cap, but it didn't bother me at all. The soundtrack sports an atmospheric flair while the voice acting is top of the line in every department. Horizon: Zero Dawn has a tremendous presentation package to it.

Overall, the 30-35 hour to Platinum adventure that was Horizon: Zero Dawn was a joyous journey with a great story, limited by many dull characters that did little to fascinate. The ones that did, however, were strong. Though the story can lose focus thanks to the size of its open world, the world itself is a thing of beauty, but limited in what you can do in it. Still, from the impressive combat and wild battles with killer machines to its marvel of a presentation, Horizon: Zero Dawn is an adventure that PlayStation 4 owners need to play, as long as they don't mind yet another open world game.
Review Page Hits: 0 today (801 total)
mediahook