Anyone thinking about picking this up in the absence of a new Phoenix Wright, think twice. 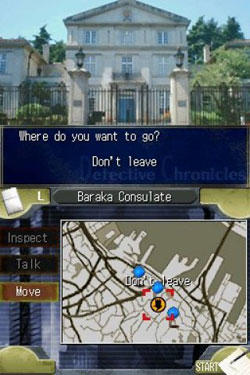 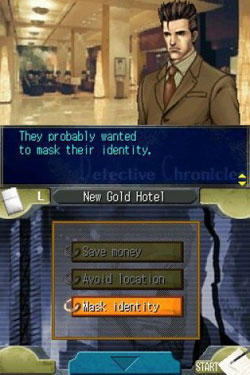 The graphic adventure has made somewhat of a resurgence as of late, and one of the latest entries in the genre is Jake Hunter: Detective Chronicles for the Nintendo DS. I would say that it doesn't live up to its full potential, but the fact of the matter is the game is so broken in so many ways that it really has very little potential to live up to.

The Phoenix Wright games generally don't take themselves too seriously, and so when something serious DOES happen, it's a little bit shocking and quite an effective storytelling device. Jake Hunter again follows the road less traveled, and puts its focus on the serious. And in the few and far between moments where it does try to lighten the mood, the humor feels out of place and falls flat.

I guess that's enough with the comparisons to Phoenix Wright - the question was never whether Jake Hunter is a better game, but whether it's a good enough game in its own right. Even when taken on its own merit, the game's flaws are numerous and glaring.

First off, the game's visuals and words often disagree. Jake Hunter: Detective Chronicles ostensibly takes place in the fictional American town of Aspicio, yet there is Japanese writing and style in the photographs of many of the game's various locations. In other locations, the descriptions given when you search also don't match up to what's shown in the picture on screen. The effect of this disparity is somewhat jarring, and really takes you out of the game.

Secondly, it's practically impossible to get stuck anywhere in the game. If there is information you need to collect in a particular location, chances are you will not be able to leave that location until that particular piece of information is revealed. This is most often accomplished by talking to the people in the area and following each branch of available dialog until the secret is revealed, and you're told where to go next.

Occasionally, you will be presented with completely arbitrary scenarios of a potentially life-threatening nature. They are arbitrary only because you can never actually lose. In fact, the entire game is afraid to let you lose. After a day's investigation, you usually go back to the office, have a smoke, and try and recall the facts you learned, and you must answer several multiple-choice style questions about the day's events. If you ever get a question wrong, you immediately get to try that question again until you get it right.

Perhaps I'm looking at the game the wrong way? Perhaps instead of considering it a graphic adventure, I should classify it more as a visual novel. Fair enough. Without spoiling anything, the plot in each case is somewhat respectable, even if there are some obvious clichés.

Unfortunately, you don't get to see much of the plot - the game plays more like an outline than a book. It's almost like a Reader's Digest visual novel. There are several parts where whole conversations are simply summed up with a sentence or two of narrative. The first two cases are so brief they only took me about an hour each to complete. The third and final case was a good bit longer, and took around 3 hours.

Also important to any novel (visual or otherwise) are interesting and likable characters. And with the abbreviated nature of the game, you don't really get a feel for the personalities of any of the characters - they're all somewhat wooden, including Jake himself.

Sadly, Jake Hunter: Detective Chronicles makes sure to alienate all three of these groups by having:
1 - A lack of interesting characters and humor,
2 - Abrupt pacing and brevity of the story, and
3 - No real interactivity or challenge.