King of the Party...in Paradise. 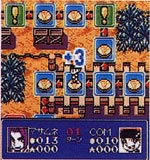 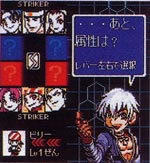 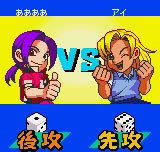 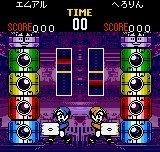 King of Fighters: Battle de Paradise is SNK's version of Mario Party for the Neo Geo Pocket Color. The game is heavy in Japanese to understand the story but if you learn what the symbols on the board do and how to play the mini games, this game is fun.


Gameplay & Control
You begin by choosing New Game or Continue. From a New Game you can select from four different strikers that, depending on you character, will determine your starting cards. As you play you can level up your character and get better abilities. On the game board, the blue marker gives you 5 coins, the red takes away 5 coins, the exclamation point is a chance game (good or bad) and the VS. launches a mini game against your opponent. You only play against one other opponent which means you can also link two NGPCs together to play against a friend. To advance around the board you roll a die like in Mario Party. What's nice is if the computer enters a chance game you don't need to watch it.

The mini games of course are the major drawn and there are a ton, though you'll play some more than others. It varies from a Pac-Man ripoff, to a game of memory, to outrunning a wall of fire. Some games are easy and fun while others, especially if you don't know what you're doing, can be frustrating. It's a mix bag and of course the mini games are totally random when you engage in one.

To help you along you can use cards that you can buy during gameplay by landing on a card square or from the menu not during a game. At the end of the amount of decided turns, the winner is determined by the amount of stars you have, which are awarded if you beat the character after landing on the square with the star and "F" on it. If no one has a star it goes to how many coins each player has.


Graphics & Sound
The graphics are very nice. The game boards each have their own theme and are detailed well. The characters, like most other NGPC games, are restricted to one color when traveling around the game board. During a mini game the character animations are fluid. The sound is good as well, nothing too special.


Replay Value
The replay value is very high here. A game moves relatively fast which is nice for a portable game. The mini games are the meat and thus are encouraging enough to keep playing. The two player Vs mode, which is what games like this are for, is the more fun and will bring you back time and time again. Building a healthy deck to assist you in a game adds even more depth and lasting appeal to the game.

The only real drawback to this game is having the entire thing, including the menus, in Japanese. It is also quite rare and therefore expensive but if you come across it, definitely pick it up.
Review Page Hits: 0 today (499 total)
mediahook