Fun that is as clear as crystal. 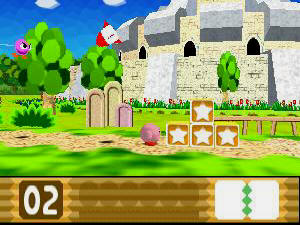 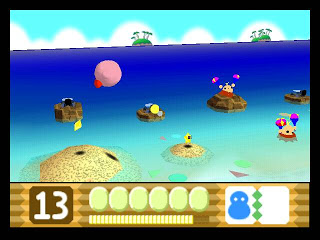 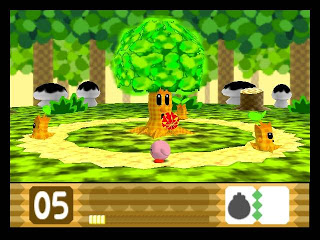 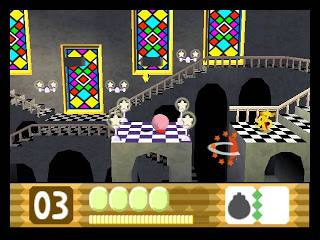 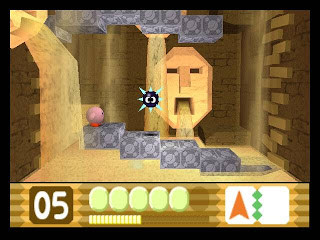 2012 marked the 20th anniversary of the adorable pink puffball Kirby. While other franchises have been given less-than-spectacular celebrations on their milestone anniversaries from Nintendo, Kirby received a special Wii compilation of six classic Kirby games and bonus content. The most recent playable game on that collection is Kirby 64: The Crystal Shards, originally released on the Nintendo 64 in 2000. Does the addition of polygons add to the entertainment?

Behold Ripple Star, a planet that fairies call their home. When it is invaded by a mass called Dark Matter, one of the fairies escapes into outer space, holding her home planet's prized ornament, a giant purple crystal. Dark Matter pursues and crashes into the crystal. The shattered pieces rain down on six planets, including Pop Star, Kirby's home. Speaking of the pink puffer, Kirby meets up with the fairy who informs him of Ripple Star's dire situation. He agrees to assist, and thus the the crystal shard quest begins.

Kirby 64: The Crystal Shards is the first mainline game in the series to feature 3D models. While the models are polygonal, the game is still played on a 2D plane. Perhaps 2.5D would be more appropriate of a term, as the game has Kirby careening along windy paths and presenting the player with dynamic camera angles.

The Kirb-man himself controls quite well. Unlike Kirby's Dream Land, Kirby in this game is limited to floating in the air for a certain period of time. Then he will tucker himself out and fall to the ground, or in a worst case scenario, to a bottomless pit below. Perhaps the only complaint I have towards how Kirby feels is how slow even his fastest moving speed seems to be. It makes returning to levels a pain in the puffball.

Kirby is known for his ability to inhale foes and then copy their powers. This is true for Kirby 64. While there are only seven unique copy abilities in the game-- which may seem very limiting-- the main gameplay feature this time around is the option to combine copy abilities into one new ability. For instance, combining Burn and Bomb allows the Kirbster to generate fireworks around him, destroying enemies in a glorious blaze. Kirby can spit out powers into specific creatures to create a given power combination.

There are six planets in Kirby 64 to explore, and each planet consists of 4-5 stages. The level variety is quite nice with levels featuring verdant plains, desert ruins, sweltering volcanoes, frozen fjords, booby trap-laden jungles, mysterious spaceships, and industrial factories.

Some stages implement Kirby's pals to help him out. Waddle Dee will join Kirby on various vehicles such as mine carts and rafts, Adeleine will paint items onto the canvas which will come to life to give Kirby a boost, and King Dedede will become a playable character, having Kirby ride on his back as he hammers opponents into next week.

Each planet concludes with a boss battle. The fights are made easier by having a copy ability already bestowed upon Kirby. Otherwise the battles take some time to beat. A boss usually slams into the ground or gives Kirby an opportunity to suck something up and shoot it at the boss to damage it. Kirby 64 features a wide range of enemy combatants-- the familiar Whispy Woods, a killer whale, and a technologically advanced machine of sorts, to name a few.

The eponymous crystal shards in the game refer to the pieces that make up the shattered sacred treasure of Ripple Star. There are three per normal levels and one per boss level. All must be collected to unlock the true final boss encounter.

The shards are placed in areas of all shapes, sizes, and ranges of effort. Some are right out in the open. Others require some ingenuity. Certain walls, floors, and ceilings are colored in two tones. This means that Kirby must have the correct copy ability combination to destroy it and get the housed shard. It can be annoying experimenting with copy ability combinations, trying to come up with the right one to get that blasted shard.

Unlike a majority of Kirby games, Kirby 64 has not aged as well as the other games in the series. The early 3D models hurt the presentation in a small way. However, the backgrounds are full of interesting things to look at. Sometimes when the action gets a little too heated, the framerate will stutter a tad. It's hardly noticeable but it happens. The music of Kirby 64 features several new arrangements of old Kirby themes and entirely new compositions that will delight fans of jaunty video game music.

Overall, Kirby 64: The Crystal Shards is a fun, albeit short ride. While the game can be completed 100% in a mere five hours, collecting all of the enemy cards, playing all of the multiplayer mini-games, and trying one's hand at the boss rush mode will give the game some longevity. It is the type of title that one returns to again and again. Maybe Kirby 64 would seem like an average platformer without the ingenious option to combine copy abilities, but still, the level design is superb, the presentation is generally middle-to-top shelf material, and the game is accessible to even beginning players. Kirby 64 is an enjoyable game, and that is a statement you can be crystal clear on.
Review Page Hits: 2 today (498 total)
mediahook