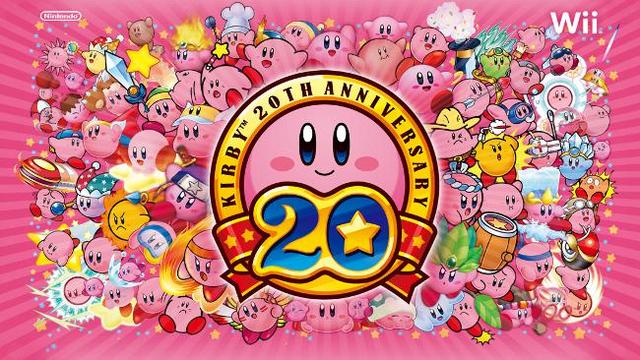 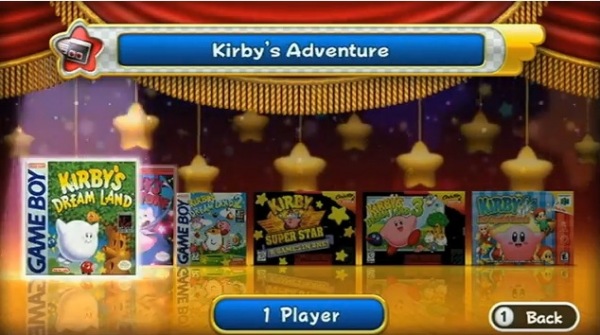 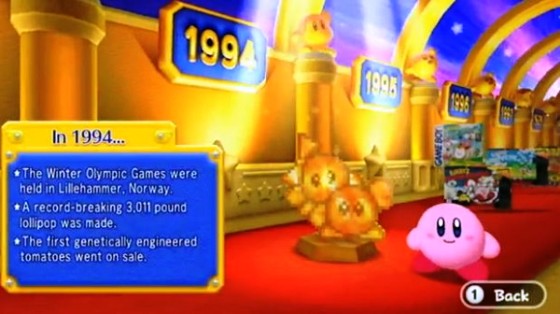 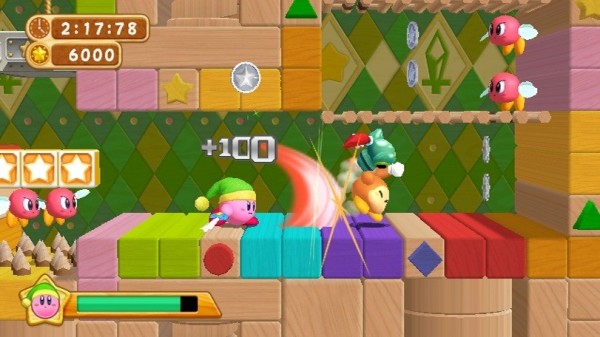 Kirby is without a doubt Nintendo's most versatile character. He's been in traditional platformers, atypical platforming games like Kirby: Canvas Curse and Kirby Mass Attack, racing games like Kirby Air Ride, puzzle games like Kirby Star Stacker, pinball games, and even a blend of billiards and golf in Kirby's Dream Course. This year marks the pink puffball's 20th anniversary. (Nintendo's little bundle of cuteness is almost old enough to legally drink!) To commemorate, Nintendo has released Kirby's Dream Collection: Special Edition, a compendium of six Kirby games on one disc with numerous extras. Is this collection a dream come true?

Kirby's Dream Land debuted the blob-ular hero to the world. The game is on the easy side, and it is quite simple in mechanics as Kirby could not copy the powers of foes. However, his inhale ability was still available, allowing him to suck up and shoot out baddies, as well as float for an unlimited amount of time. I find the original Dream Land to be the weakest game in the collection.

Kirby's Adventure not only introduced the copy mechanic into the series, it made Kirby his endearing pink color. Unlike the ultra short Dream Land, Kirby's Adventure had eight worlds of multiple levels that could be played over and over again. Adding some replay value into the fold, Adventure had secret switches that were well hidden within many of the game's levels. Perhaps my main beef with the game in a mechanical sense, one that Kirby's Dream Land 2 shares, is that you lose your power from getting damaged. Later games in the series allowed Kirby to take several hits before a power was lost.

Kirby's Dream Land 2 brought with it animal buddies for Kirby to ride. Depending on what power Kirby had copied, each animal had a different attack style. There were three animals that joined Kirby's second handheld outing: Rick the Hamster, Coo the Owl, and Kine the Fish. Beating the game 100% is probably one of the most difficult tasks in a Kirby game. The game already is more challenging than your typical Kirby, but the addition of Rainbow Drops and trying to attain them makes matters more arduous.

Kirby Super Star is one of the most well regarded entries in the series. It is a set of eight games. (I'm not going to make some lame Inception joke about how there's a game with eight games (Super Star) that is a part of a game with six games (Dream Collection). I'm above that for once.) Regardless, each game has its own objective. Revenge of Meta Knight has Kirby chasing after Meta Knight's ship while a time limit ticks away. Milky Way Wishes has Kirby going from planet to planet in any order, trying to collect new powers. The Great Cave Offensive is a maze where Kirby needs to collect as much treasure as possible. And so forth. This was, to my knowledge, the first game in the series that allowed for cooperative play between two friends or family members. This cooperative capability would return in the next game on Dream Collection's library.

Kirby's Dream Land 3 took the handheld franchise and placed it on a home console for the first and last time. The game is most notable for having an art style reminiscent of someone using colored pencils for all of the aesthetics. It is incredibly pleasing to the eye. Each level in Kirby's Dream Land 3 had its own side objective. For example, one level's objective would be completed by not trampling over any flowers. To reach the true final boss of the game, all objectives needed to be finished off.

Lastly, Kirby went 2 1/2D in Kirby 64: The Crystal Shards. Outside of Kirby moving so slow, the game is one of my favorite Kirby platformers. The main mechanic this go around was combining two powers to make a stronger one. Sometimes you could not reach a hidden area without having the right combination of two powers, and sometimes this annoyingly meant you had to play trial and error to get right combination of powers. In each level (besides boss battles, of course) were three hidden shards. Collecting every one of them allowed you to face off against the final final boss. Kirby 64 is what I would consider to be an underrated Kirby game.

Perhaps my only gripe with the collection of six games is that they are 1:1 conversions. That is to say that no alterations were made at all to make the games run or look better than they did when they released on their respective systems. Now, one could argue that this is a good thing -- they're faithful to the originals -- but there are obnoxious technical problems. For instance, in Kirby's Adventure, when there is too much hubbub happening on the screen at one time, there is an immense amount of slowdown. I would have loved to see Nintendo fix this. I knew it was not going to happen as Nintendo with their classic games (Virtual Console) are satisfied with releasing the original game with no touch ups, but it is disappointing regardless.

Apart from the six games the compendium contains, there is a slew of bonus content attached in the box and on the Wii disc. In the box alone are two goodies: a 40+ song soundtrack spanning across Kirby's stellar career (with two original tracks and a remix included), and a 45 page celebration book that possesses never-before-seen art work, design documents, and the history of every Kirby game ever released.

On the actual disc is a bevy of bonus content such as an interactive timeline, challenge stages a la Kirby's Return to Dream Land, and three episodes of the Kirby anime. The interactive timeline allows you to take the role of Kirby, running along the timeline. Outside of checking out the year each game released, you can examine the original box arts of each game, and watch a trailer as well. The timeline also informs about events that took place around each year like Kirby's first appearance in Super Smash Bros. and info on pop culture and history. If you ever wanted a Kirby game to tell you when Janet Reno became U.S. Attorney General, Kirby's Dream Collection is the title for you!

The challenge stages are similar to the ones found in the aforementioned Return to Dream Land. There are three "worlds" each with several stages, each with a different power for Kirby to utilize and master. Stages require Kirby to run through them, defeating enemies, grabbing gold, silver, and bronze coins, and trying to do all of this within a time limit. Complete mastery of each ability is necessary to gain the most points, nab the most coins, find all of the secret areas, and finish each stage in a fast fashion.

After a set of stages has been cleared, a special door unlocks. It is a challenge against Magalor of Return to Dream Land fame. These challenges has Kirby and Magalor racing one another through an obstacle-filled course. The first one to the finish wins. Along the way, Kirby needs to nab each coin and defeat each enemy before his opponent does or he will not get the points. Just like the regular challenge stages, Kirby is rewarded with a medal depending on his total points earned, with the difficult to obtain platinum being the best.

Kirby's Dream Collection: Special Edition is definitely one of the best collections Nintendo has put out. It puts Mario's 25th anniversary Super Mario All-Stars package to absolute shame. I would have liked to see the classic Kirby games given upgrades as done with Metroid Prime Trilogy's original games. That said, for forty dollars you get six excellent Kirby games, a soundtrack spanning Kirby history, a book with loads of information to absorb, a cool interactive timeline, original and fun challenge stages, and three episodes of the Kirby anime to sit down and enjoy. Kirby's Dream Collection will no doubt be a dream come true for Kirby fans. As for everyone else, what do you have to lose by trying out one of most accessible (but still enjoyable) franchises in gaming?
Review Page Hits: 5 today (324 total)
mediahook