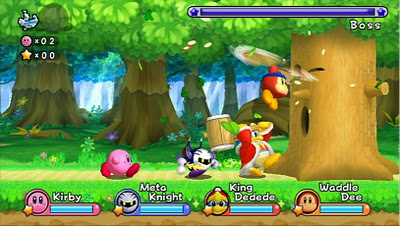 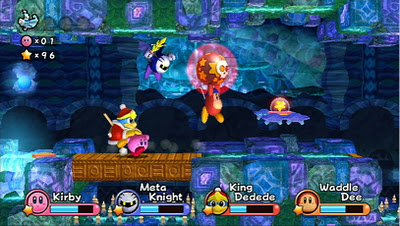 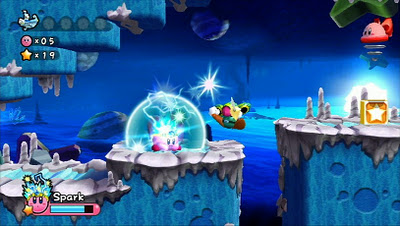 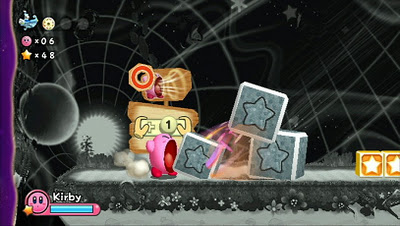 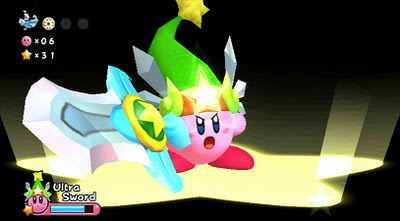 HAL Laboratory's Kirby has been really busy lately. In the last year alone he's appeared in the 3D Classics version of Kirby's Adventure on the Nintendo 3DS, marched with nine other versions of himself in Kirby Mass Attack on the DS, and earlier this year for our PAL friends appeared in Kirby's Epic Yarn. Now he's venturing back to more comfortable and familiar surroundings on Planet Popstar with Kirby's Return to Dreamland, a game six years in the making. Was the wait worth it?

One peaceful and pleasant day on Planet Popstar, Kirby, holding a piece of delicious cake over his head, is running from a very hungry Waddle Dee and King Dedede. Meanwhile, Metaknight sits on a hill reading. Suddenly a bright flash fills the sky and an intergalactic ship crash lands on the planet's grassy surface. Kirby and his three partners enter the smoking ship, coming across a kooky creature named Magalor who beckons Kirby and the gang to retrieve the five missing parts of his ship that were lost from the crash landing. Being the fine upstanding citizen he is, Kirby agrees, and thus this adventure begins. While the story is typical Kirby fare, it serves as a foundation for the gameplay that follows. CG cutscenes display most of the action, but there is the occasional real-time cutscene, too.

For those uninitiated to traditional Kirby games (Epic Yarn, Mass Attack, and Canvas Curse need not apply), the object of the game is to travel through levels, gobbling up enemies with Kirby's inhale ability, and reaching the goal with your wits intact. Kirby is able to float in the air an infinite amount of times as well as spit a cloud of smoke to defeat lesser enemies. Fans of Kirby no doubt know that not only can Kirby inhale enemies, but certain enemies when digested give the pink puffball a new power. Such examples include spark, whip, wing, ice, fire, sword, ninja, needle, and many, many more. For instance, with spark Kirby can create a shield of electricity around him to zap foes, while with ice Kirby is able to freeze enemies and send the frozen blocks into other unsavory characters. Each power has a wide variety of different moves, and unlike a fighting game, you really do not have to remember ten button combos to unleash them on your intended target.

The big shake-up to the series for Kirby himself are Super Abilities. In specific sections of levels larger-than-usual enemies will spawn. When Kirby sucks them up and digests them, Kirby will get a Super Ability. From wielding a giant blade or cleaver that carves up every enemy, to turning into a large snowball that can roll over enemies like a bowling ball, these new moves are really cool and powerful.

The more important shake-up for the series as a whole is the addition of multiplayer. At any point during gameplay a second, third, or fourth player can drop in or out and control a bandanna-wearing Waddle Dee, Metaknight, King Dedede, or a different colored Kirby. Beware as if player one dies, every player loses a life and starts at the beginning of the room. Each time a player dies, a life is lost from the main player's total count. When a player is straggling behind, the game will automatically transport them to the main Kirby's location. I didn't have the opportunity to play with a room full of players, but with two players alone, it was a highly entertaining experience, and it made the game easier to trek through.

There are seven major worlds in Kirby's Return to Dreamland. They range from grassy knolls to tropical oceans to frozen tundras to rustic factories. Most worlds contain anywhere from 4-5 levels inside of them. Some levels will have you swimming against a current, carefully avoiding cannon fire, dodging platforms that can crush you, running along treadmills, and taking out sub-bosses. Generally the sub-boss should be inhaled and digested to take their power as their power will shortly be needed to solve an optional environmental puzzle. The game is diligent about giving you the opportunity to obtain the correct power for the correct situation.

And you will need the right power at the right time to collect hidden Energy Spheres. These are placed in clever locations throughout the game's many levels, usually 3-5 in a given level. Some require a certain power to access, some are locked away behind doors that can only be opened with a key that needs to be carefully carried over from a distance away, while some are placed in precarious locations. Collecting enough Energy Spheres (there are 120 total to gather) unlocks Challenge Rooms, Copy Ability Rooms where Kirby can nab any power he wants from the hub of the Lor Starcutter, Megalor's spaceship, and two sub-games. One of these has you timing your throw of a ninja star to hit as close to the center of a target as possible while the other has you playing a light gun game where you shoot at the various weak points of a robot.

Challenge Rooms put your Kirby skills to the test as you race through an environment, grabbing bronze, silver, and gold coins and defeating enemies for points. Not only are you timed, but you get penalized 500 points for each time you are damaged, so be careful. After you reach the goal, your points are totaled up (i.e. how many coins you collected, how many enemies you defeated, and how much time was left on the clock), and you are awarded with a bronze, silver, or gold medal. There are several Challenge Rooms to complete, and each one revolves around a different power of Kirby. They will push you to use every move in your arsenal if you want a decent score.

Going back to Energy Spheres, some are situated within special space portals. In these zones you are constantly being chased by a relentless wall of matter. If you touch it, you lose a life and are kicked out of the zone. You must frantically plow through whatever obstacle gets in your way to reach the end door. Once this is accomplished, a lone sub-boss in the form of a Sphere Doomer challenges you to combat. Win, and two Energy Spheres are yours for the taking. These areas are intense, and they only get harder as you progress through the game.

After completing the main story, you unlock a whole slew of new modes including Extra, The Arena, and Sound Test. Extra has fiercer and larger enemies, and you are given a lower amount of health to work with. The bosses change their attack patterns, and those walls of matter in the space-time zone move much faster. Extra is by far some of the most challenging action seen in a Kirby game to date. Thankfully there is still plenty of food (the health of Kirby games), to restore your health. In multiplayer you can hug a friend by just being near them to partially heal an ailing partner. Meanwhile, the Arena pits you against all of the bosses (sub and main) in the game, one after another. In between bouts you can fully restore your health, but you only have a finite amount of Maxim Tomatoes to do so. Perhaps there's even something else for beating the Arena and Extra mode...

Kirby's latest console title is a vibrant, colorful, and whimsical looking game. The bright color palette paints and presents a happy-go-lucky world. Even in areas that are supposed to feel grim and dark there is nothing really menacing or scary about the game. Technically, everything runs without any hiccups or unplanned pauses to the action, which is crucial for a platformer. The music, as expected with HAL's wonderful cast of composers, is also pleasant with many cheery, head-bopping tunes. Return to Dreamland may not be pushing an impressive amount of polygons, but it definitely gets the job done and does so marvelously.

Overall, Kirby's Return to Dreamland was incredibly worth the six-year wait. The inclusion of Super Abilities and multiplayer play adds an entirely new dimension to the gameplay, and the difficulty is just right, though some might feel that the initial challenge is too soft. Regardless, for a Kirby game it ranks up there with the most arduous ones in later levels and modes. Do yourself the privilege of sucking up a copy of this amazing platformer today. You won't get heartburn, and you certainly won't regret your purchase, either.
Review Page Hits: 0 today (189 total)
mediahook