Sure, some of it's rehashed material. Sure, it's just "more sampling." And yes, Kanye West is an egotistical jackass. None of that stops Late Registration from living up to the hype and being one of the best releases of 2005. 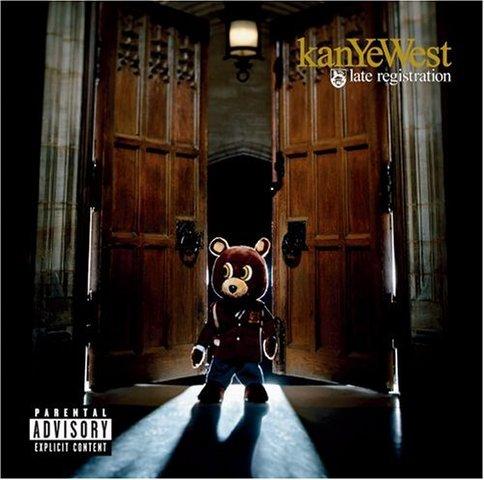 Right before Late Registration's release, I found myself watching Kanye West on television. I decided that I would try my hardest NOT to enjoy his forthcoming CD on principle. After all, calling him cocky would be the understatement of the century. His personality ranges from irritatingly arrogant to downright detestable. The thing is, once you turn on Late Registration, he's just a goofy kid playing around with beats and rhymes. Ultimately, I was unable NOT to like Late Registration; it's just too darn good.

If you've been living in a cave, Late Registration is the follow-up to the biggest debut album of 2004, West's College Dropout. While there are similarities between the two CD's, there's still enough difference that it feels like a whole new experience with the man who calls himself the Louis Vuitton Don. If it's possible, West becomes even more ADD on this album and it works. We end up believing him just as much when he rages on "Crack Music" as when he confesses on "Addiction" and as when he flatters his gal pal on "Celebration." Despite the fact that he doesn't have the untouchable flow and polish of Jay-Z, he is a jack of all trades. Case in point, he feels just as at home with Adam Levine of Maroon 5 belting out the high notes in the background as he does alongside Cam'Ron's grimy machine gunfire flow.

The strength of the album comes when West is content to let the beats take over; he and Jon Brion's co-production provide terrific background noise. "Bring Me Down" features an unremarkable Brandy and fairly typical West rhymes, but combines a mourning piano and a determined drum beat (it's also of note here that the song recycles part of a verse that West laid down on Talib Kweli's Beautiful Mixtape). Still, it ends up being much more then the sum of its parts and we almost believe West's description of his own invincibility. "Hey Mama" is common in its sentiment and content, but it's hard not to enjoy with the perpetual "la la la" in the background. We even see Mr. West take on Agent 007 in "Diamonds From Sierra Leone" (take your pick: one is the ode to the jewelry and Roc-A-Fella, the other criticizes the diamond trade that takes lives all over Sub-Saharan Africa), sampling an old James Bond riff. Jay-Z stars on the remix, which is by far the more thoughtful version, but the building tension of each verse on either version is the real star.

There is also something to be said for having your pick of guests, as the hottest producer/rapper in the industry had for this LP. Whether it's the beats or the pressure of being on Kanye's CD, West manages to bring out the best in artists of all kinds. Paul Wall, a Houston rapper made popular by his syrupy flow that's almost viscous excels on a slower simple beat with a lonely saxophone and keyboard pair on "Drive Slow". He's more effective then usual, thanks to punchlines that perfectly ride the lazy beat. Cam'Ron, a New York rapper of the vibrant rap group the Diplomats, sings to us in the hook of "Gone," and then combines everything Harlem into a short verse. He nimbly hops from subject to subject until we arrive at the hook and wish we had more.

The weakest part of the CD is easily the skits. In the same fashion as College Dropout, there are several vignettes that tell us, in essence, all the stereotypes of a university underachiever, and then hey! there's Kanye with his quarter-million dollar diamond-encrusted Jesus piece to drive home the irony with a mallet. It sounds crass and it ends up being very much so because there's no humor to it; it feels like the skits are not just refuting those who told West he would never become anything, they're simply kicking those people when they're down. Fortunately, they take up a total of about three minutes of the CD so you can get back to the blaring horns, oldies samples. and the likable (at least for these seventy minutes) Mr. West.