A great game sure to satisfy any gamer, but a little rough around the edges. 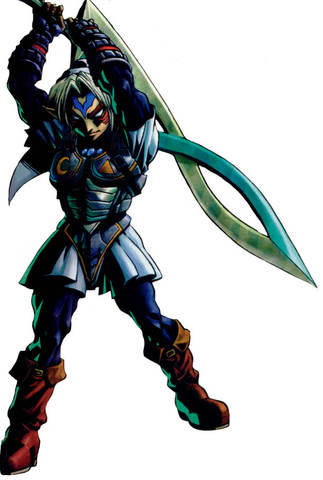 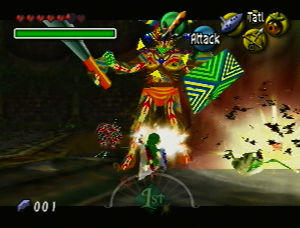 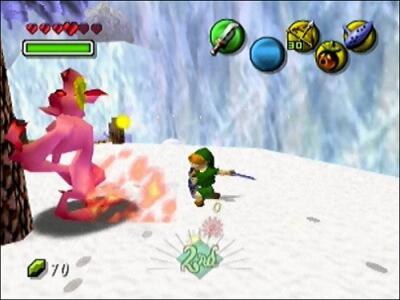 Story:
After saving Hyrule from Ganon once again, Link decides to leave the place that made him a hero. While riding Epona in the forest, away from Hyrule, Link gets tired and falls half asleep. Unknown to Link, somebody has been watching him. With the aid of two fairies, the mysterious Skull Kid spooks Epona, and Link falls to the ground and is knocked out. The Skull Kid checks Link to see if he has anything valuable, and comes up with Link's Ocarina of Time, given to him by Zelda before he departed Hyrule. Link wakes up to find Skull Kid stealing his Ocarina, then Skull Kid gets on Epona, and tries to flee. Link, holding onto Epona's leg, won't let go, and is eventually flung off. Now he chases Skull Kid, and when he catches up with him, Link is transformed into a Deku Scrub thanks to Majora's Mask, which Skull Kid had stolen as well (not from Link). Link is then cast into a strange world called "Termina", in which Skull Kid is using the evil power of Majora's Mask to make the moon fall out of the sky and destroy the whole land. Link meets the Happy Mask Shop owner, who asks him to get Majora's Mask back. In exchange, he teaches Link the Song of Healing, which transforms Link back into his human form. Now, Link must journey to the four temples of Termina to awaken the four giants, the only ones who can stop the moon from falling.

Gameplay:
The gameplay is pretty good, and stays along the same lines of Ocarina of Time. The extremely helpful targeting system is back, and proves to be even more useful this time around. Though the biggest change is the fact that you have three days (or 72 minutes in real time) to "beat" the game. This can get annoying while trying to beat dungeons, but adds a new level of challenge to the game, which is actually nice. Your timer runs down, and whenever you want, you can play the Song of Time, and it will transport you back to day one. If you run out of time, you get a game over, and loose all you got/all you did on that day. If you had 999 rupees, 40 arrows, 23 bombs, etc., when you go back in time, you loose them all. You don't loose that item really, the count just goes down to zero. A little grass cutting will fix that, so it isn't TOO much of a problem. You can also play each note in the song of time twice to skip to the next half day interval, or play it backwards to slow the flow of time. The world of Termina is very big, and provides a lot of hidden treasures and sidequests like skulltula houses, which provide you with things like pieces of heart. (There are no longer gold skulltulas hidden everywhere for you to find) One of the downsides is the lack of temples. There are really only 4 big temples (OoT had about 10, ALttP had about 12), with a few medium sized cave-like places. This leaves you wishing there was more (or not, if for some reason you don't like the temples), and sometimes like it was just a bunch of sidequests. It is annoying at first, but once you get the hang of it, it really isn't that annoying, and makes the game just hard enough.

Graphics:
The point of the Nintendo 64 Expansion Pak was to provide better graphics and more memory. Although though it is apparent this game takes more memory than a usual Zelda game (this game only has two files available for players instead of the usual three), the graphics look generally the same as Ocarina of Time, not really that much better. These graphics are still some of the best on the N64. The textures look nice for the most part, though sometimes you can go through things because of them, or objects aren't completely solid.


Learning Curve:
I would not recommend this for young gamers, as figuring out where you are supposed to use each mask would be quite a challenge. If you have (and hopefully you have) played Ocarina of Time, this shouldn't feel much different, because it uses the same game engine, so most things are very similar. At first, having to change back and forth between masks is an annoying task, but as the game progresses, you start to experiment with different masks in certain places, and learn how to each mask to it's full potential, which definitely makes the game more enjoyable. Once you get a hold of the time travel and mask wearing, the game gets a bit easier, and flows much nicer.

Replay Value:
Unless you are going to play this game over again, this game has almost no replay value (as is the norm for Zelda games). The only reason you may want to go back to play this is if you got the Fierce Deity Link mask near the end of the game. This is an awesome mask that transforms you into an adult Link-like form, with an awesome sword. The catch? This mask can only be used in boss battles, although you do get it in time for the final battle, which helps immensely. Unless you go back to do that, there isn't much more to do with this game except play it again.

Sound:
This game has a beautifully composed soundtrack, one of the best of the Zelda series and Nintendo games in general. The Zelda Overworld theme returns, after being absent from Ocarina of Time. The sound in the Nintendo 64 version of the game flows nicely, and makes you feel like you are really there. Though if you are playing on the Collector's Edition Gamecube disk, sometimes (most of the time not) sounds are distorted, or not in line with the gameplay because the game is a rom running on an emulator, and is not a port of the N64 version. This is hardly noticable though, and won't distract you from enjoying this great game.

Overall:
A great adventure game which should be played by any Zelda fan, or gamer in general. It's loads of fun, and has great gameplay. Even though the replay value is basically 0 right after you beat it, a while later you'll definitely want to play it again.
Review Page Hits: 1 today (850 total)
mediahook