The Legend of Zelda: Ocarina of Time (Nintendo 64)

This is "The Legend of Zelda" at its finest. They perfected the move to 3D without flaw. 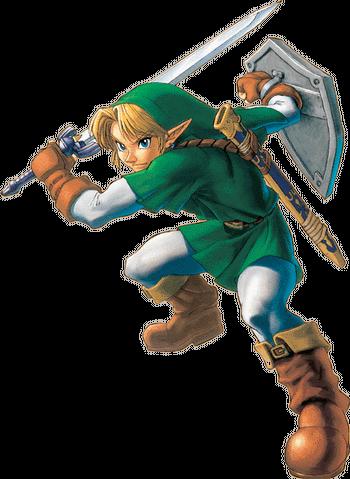 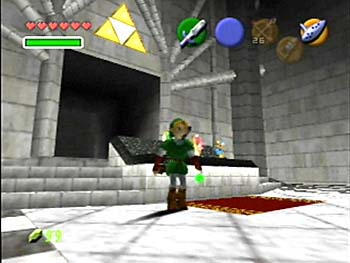 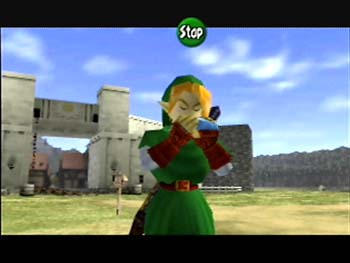 This is obviously the most popular Zelda, and turned many "casual gamers" onto the series. Does the game deserve the recognition it receives? Check the review!

Story: A long time ago, there was Din, the goddess of Power; Nayru, the goddess of Wisdom; and Farore, the goddess of Courage. Din used her power to create the land of Hyrule; Nayru used her power to create a sense of wisdom and sense of law among the newly created world. Farore created Hylians to uphold the law. After returning to the heavens, they left behind a symbol that represented their power, wisdom, and courage...the Triforce. There was one who sought the sacred item -- Ganondorf, king of the Gerudos.

However, there is one mysterious boy that is destined to leave the forest someday and uphold justice in his own way. The Deku Tree, the forest guardian, calls upon Link to go on his quest and seek the "Princess Zelda." Why can Link leave this forest? Isn't he a Kohkri? Why has the Deku Tree chosen our silent friend? You'll have to find out on your own.

Graphics: "The Legend of Zelda: Ocarina of Time" really redefined the series. From the prettiest ray of light shining down upon you, to the moon reflecting off the river water, Ocarina of Time really did push the limits of the Nintendo 64 graphically. People were amazed that Link opened his mouth as he screamed in pain or after a sword swing. The graphics can reflect the epic atmosphere of the game well -- trick walls that you have to use the Lens of Truth to see, the shadow claws seen on the ceiling, or even the well-designed people and friends that Link makes throughout his journey.

Sound: This is the first Zelda game to capture the spirit of the classic "Legend of Zelda" for the Nintendo Entertainment System. This can vary from time to time. The corny music that plays when you obtain an item brings back all sorts of nostalgia. The music of the game also helps create the atmosphere -- the creepy feeling you get as the music plays in the Shadow Temple or the bubbly sounds that it makes at Jabu-Jabu's dungeon.

Gameplay: "The Legend of Zelda: Ocarina of Time" has a very fun combat system that I think everybody will enjoy. You can target your enemy and when you do that, you will circle around him. During this stage you can do interesting stuff such as back flips, side jumps, a jumping slash, or block with your shield. Link's foes come in all kinds of shapes and forms. The popular enemy, the Stalfos, is in this game as well. They are known for challenging Link by blocking his attacks with their shields and doing a jump slash. The Wall Masters from "The Legend of Zelda: A Link to the Past" make an annoying comeback in this game. They are known for taking you back to the entrance of the dungeon you're currently in.

Aside from the fun combat, "The Legend of Zelda: Ocarina of Time" has enough dungeons to keep you busy for a long time. The dungeons are some of the best in the series and can be very difficult to a newcomer to the series. The Water Temple is among the hardest of the bunch. Filled with cleverly executed puzzles, this video game will definitely challenge your mind. Some puzzles involve just beating all the enemies in the room, a mini-boss, pushing giant blocks, or using your Lens of Truth to see through false walls. Each dungeon ends with an extremely fun boss battle to test your skills that you learned going through the dungeon.

This excellent game is also filled with plenty of side quests to participate in. You can get a strong, new sword and even try to sell masks to certain people. Gaining all of the heart pieces will prove to be a challenge as you will have to do specific tasks to acquire them. Another excellent addition to the series are the mini-games: the fantastic fishing game, finding three cuckoo's, and even shooting arrows at a certain amount of targets. The day and night system plays a role in this game as well. Depending on whether it's day or night, different characters will show up, some stores will be closed, and at night, you will be ambushed by skeletons.

Unlike any other Zelda games, there are two themes to this game: you grow up and the Ocarina of Time. Growing up is vital because a lot of the characters have new problems and require Link's help. Doing different things as a child will effect what's going on when he grows up. The Ocarina plays a vital role because it will let you warp places, change it into day or night, conjure up some rain, let you call your horse Epona, and let you talk to your childhood friend. There is more to this Ocarina of Time, but I can't tell you without spoiling the story. The final battle is one of the best boss battles in the series, but I won't spoil that for you either.

Overall: This is arguably the best in the series because it is so groundbreaking to the Adventure genre. It revolutionized the whole aspect of gameplay, by recreating sound effects from the old Zelda's, and is graphically superior to all of its competition. I definitely recommend this game to all who have not played it. There is also a GameCube version out, but I recommend the Nintendo 64 version because the Gamecube version has been known to freeze sometimes. This game and Shigeru Miyamoto definitely get my respect for making this marvelous game.
Review Page Hits: 0 today (430 total)
mediahook