A Love/Hate Relationship to Marvel At 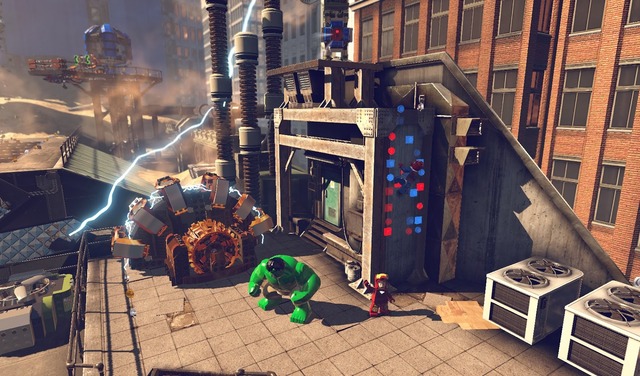 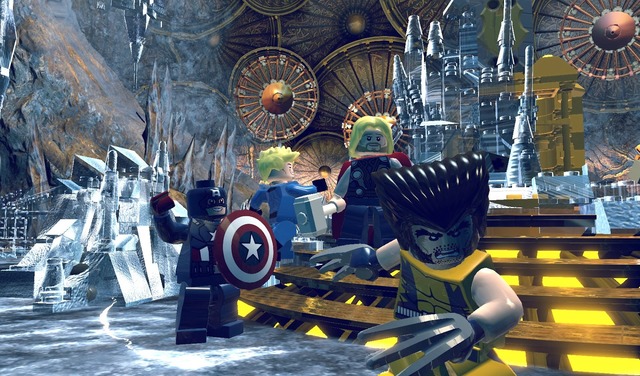 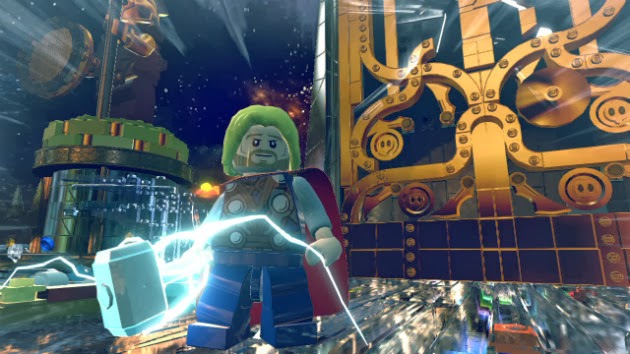 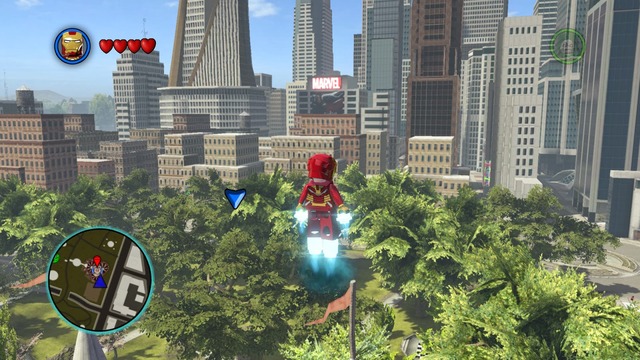 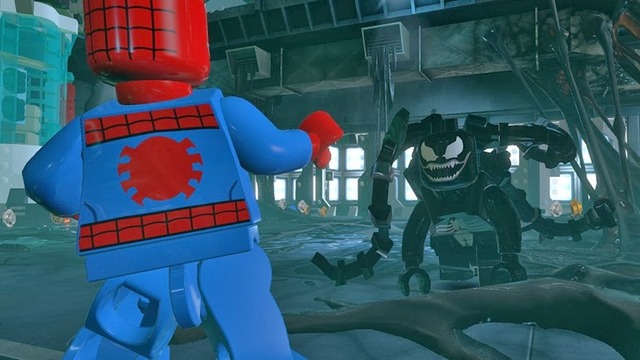 LEGO City Undercover was one of my biggest surprises from 2013. It exuded with charm, polish, and had a dense open world to explore. Coming off that game, which I deemed the greatest LEGO game yet, I was eager to see how TT Games' next licensed LEGO game would turn out. The end result is LEGO Marvel Super Heroes, and I don't think I have had as many ups and downs with a game in a looooong time.

The simple but original plot of LEGO Marvel Super Heroes has such names as Iron Man, Spider-Man, the Incredible Hulk, Wolverine, Thor, and more teaming up to tackle and take down a scheme from Loki and a gathering of other Marvel supervillains who plan on creating a weapon that can destroy the planet. The interactions between characters within the game are rather funny, even if the jokes occasionally fall flat.

LEGO Marvel Super Heroes consists of 15 story missions as well as 11 bonus levels that unlock after the game has been beaten. LEGO game veterans should be up to snuff with what these levels contain, but for those who have yet to try one of the myriad past LEGO games available, this is how it goes down. You pretty much need to smash every breakable object in sight that isn't cemented to the ground. In certain LEGO objects are broken up LEGO parts that need to be reassembled to create something valuable in proceeding through the level. For instance, in the first level you need to break Sandman's makeshift gate by having Iron Man destroy silver scaffolding, reassemble the broken pieces into an anvil, and then have Hulk pick it up and toss it at the gate, allowing progress.

While it is very much true that there are over 100 playable characters to select from in LEGO Marvel Super Heroes, the majority of merely reskins of other characters. There are multiple types of characters with their own abilities. Such an example includes the Human Torch. Not only can he fly, but he can also shoot out a steady beam of fire to destroy gold LEGO bricks. Meanwhile, Storm can use her lightning powers to charge up switches to turn on certain machines or open specific doors. Then there's the Incredible Hulk archetype who is the only type of character that can pull green handles. That's just some of the many varieties of character archetypes in LEGO Marvel Super Heroes. Many powers and abilities crossover between characters, so there is some variation here and there.

It's important to use the right power at the right time to progress through the story levels. There's generally just one way to solve a puzzle, and through breaking everything in sight you eventually come across what needs to be done. "Oh, hey. I just broke a dumpster that allows me to use the broken LEGO pieces inside to build a vent that only Mr. Fantastic of the Fantastic Four can enter into. Awesome." While the puzzles themselves are genuinely pretty clever, the LEGO formula is really, really getting old.

Still, you cannot discredit LEGO Marvel Super Heroes for the amount of content it has. As soon as the credits roll and you are put back onto the S.H.I.E.L.D. helicarrier, the game opens up exponentially, especially compared to the start of the game where you couldn't even explore much of the city. You can freely explore Manhattan as any character you want, making it easy to come across hidden gold bricks, citizens that have missions for you, and character/vehicle tokens. All around the island of Manhattan are goodies to be found and puzzles to solve. Of course, getting around could be much easier, but flying (which is the fastest way of getting around, after all) has controls that were obviously devised in the third circle of Hell.

The genius who said the controls for flight were passable needs to have their head examined. Somehow, someway, flying is even worse than LEGO Batman 2. This wouldn't be so much of a problem if there were not flying races where you have to carefully speed through aerial rings. These races glaringly show the flaws of the control implementation. You raise up with one button, and lower with another. The problem here is that the lower button and the land button are the absolute same thing. It becomes clear this is inexcusable in narrow areas where you have to stay close to the ground, only to accidentally land, screwing up any momentum you possibly had going.

Then there's free play that unlocks after a given story level is completed. These allow you to take the characters you've already purchased or otherwise unlocked into the level with you, granting you access to previously unavailable areas and to solve previously impossible puzzles. When you originally play a story level, you are very limited in what characters you have to choose from. You just have the ones the game has granted you as it pertains to the LEGO Marvel's overarching story. This means you're lucky to be able to find 1-3 minikits in a given level, of which there are ten in each. Through having any character you have unlocked available to you, you can get all of the minikits in each level.

However, like most things in LEGO Marvel Super Heroes, there's something else that soils this slightly. In past LEGO games when you were in free play mode, you could switch characters with the shoulder buttons. In LEGO City Undercover for the Wii U, this was possible, as well as holding a button brought up a character selection wheel to easily switch between your most used/selected characters. This isn't the case in LEGO Marvel Super Heroes, of course, as in this one you have to hold a specific button for a second, have a menu slide up from the bottom of the screen, select your desired character, and wait for the two or three seconds it takes to load them. This would be fine if you didn't have to change characters so much. You're constantly needing to switch back and forth between numerous types of characters to solve puzzles. That's switching between Iceman to remove the fire in the way, Magneto to interact with the magnetic object, Jean Grey to use her telekinesis to assemble another object, and then Thor to use his lightning to activate a switch. It's tedious to switch so much.

In total, LEGO Marvel Super Heroes will take upwards of 35-40 hours to see and do everything. There are 250 gold bricks to collect. These are found scattered around New York City, earned through completing levels, collecting enough studs, the currency of LEGO, in a level, finding all minikits in a level, and rescuing Stan Lee in a given level. There's also 100+ characters to unlock and multiple vehicles to unlock through coming across their tokens around the city. This, like getting gold bricks in NYC, requires you to solve an environmental puzzle or help out a citizen with a task in the city. Unfortunately, said tasks pretty much amount to fetch quests and battles with a group of goons. The problem here is that the combat system of LEGO games is so simple and that death has no consequence makes these fights nothing more than a nuisance. I started groaning each time I was met with another bunch of henchmen to throw punches (or beams) at.

Another nuisance is how LEGO Marvel Super Heroes, at least on the PlayStation 3, performs in general. Many times I would arrive at a section of New York City where I knew a citizen was waiting for me only to discover there was nobody around. Instead, I had to wait about five seconds for the citizen to load into the city. Then there's all of the glitches within the game-- characters not showing up, respawns over pits, making a character continuously die in an endless cycle, falling through floors, etc. Let's not forget the long loading times and the many hard freezes I had to endure. Curiously, there's even some cutscenes that aren't able to be skipped while some are. There's no rhyme or reason for this. However, there's an option to skip this one screen... that just happens to be a loading screen. Why would you need a loading screen if I can just skip the darn thing?!

Overall, LEGO Marvel Super Heroes is an odd beast. Compared to LEGO City Undercover, Marvel Super Heroes is an unpolished mess. However, I really enjoyed a lot of the elements of the game-- playing through the story levels, exploring Manhattan, collecting all there was to collect, and so forth. Nonetheless, for every two parts of the game I enjoyed there seemed to be one baffling design decision or one irritating bug or glitch that turned my smile into a grimace. It's this love/hate relationship with the game that keeps me from wholeheartedly recommending it to everyone. If you plan on going for 100% completion, be ready to be annoyed often. If you're just going to casually go through the story and complete missions, then you'll probably have greater success with this game than I. Nuff said.
Review Page Hits: 2 today (163 total)
mediahook