A charming, art direction-fest with shaky platforming and level design that ultimately ruins what could have been a masterpiece 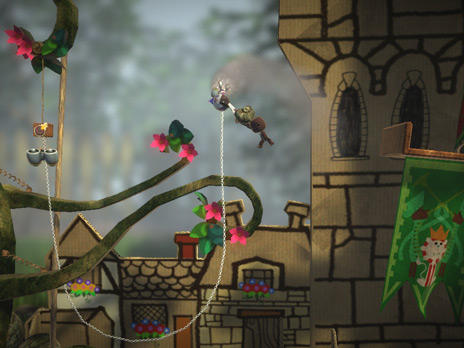 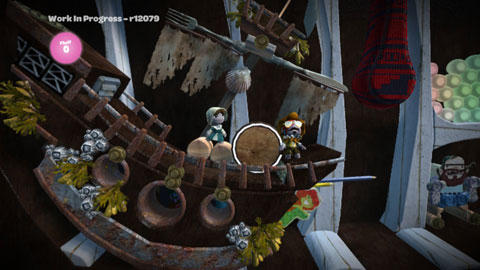 LittleBigPlanet is Media Molecule's greatly anticipated 4-player cooperative, physics based, level editing platformer on PS3. The game was meant to be an innovative revolution yet ultimately trips up in the most key areas resulting in a game that leaves you longing for an improved sequel. Each level in LittleBigPlanet is two dimensional and relatively linear, and has 3 planes. The 3 planes of the map make it possible to walk behind objects and such, yet adds a degree of complexity the game didn't really need. It adds a lot of possibility for secrets, yet the game might have worked better on at most two planes. Thankfully, many parts of the levels are confined to one plane or play as if only one exists. The big innovations of LBP are the ability to grab onto some surfaces and 4 player multiplayer. Objects react as expected when stepped on, thrown, pushed or swung upon, and at its best, the game is a lot of fun and feels like nothing you've ever played.

Unfortunately, LittleBigPlanet boils down to a collection of interesting single player moments along with a fairly mundane experience otherwise. The platforming itself in LittleBigPlanet is terribly floaty and worst of all you can't use the d-pad since it's reserved for emotions. The level design is by no means phenomenal in the Media Molecule levels, but the plethora of crap online makes you wonder if a truly fantastic level is even possibly to build within the confines of the LittleBigPlanet engine. Most of the Media Molecule levels feel like little more than showcasing of their artistic talents along with mindless collection of stickers and objects for your Sackboy. The campaign certainly has its moments but considering the creative minds that made it, one would expect the levels to be unmatched, not hit-and-miss.

The entirety of user content fits into three discrete categories:

1. Unplayable levels such as rollercoasters or theme parks that are basically just "fun with physics"
2. Remakes of existing works or extremely similar tributes.
3. "Real", original, platforming levels which range from middling to completely horrid.

Most of the content fits into the third category, unfortunately, and the remakes may be impressive within the confines of the engine, but looking back does that really make them fun? For example, the entirety of Contra was remade within LBP by various users, and it's all outstandingly impressive and accurate, but why would anyone want to play horrid LBP Contra instead of the real Contra? What makes LittleBigPlanet Contra stand out? It's the fact that a bad remake of an existing property is better than the loads of other garbage available that users have made, so while it's extremely superior by comparison, it doesn't make the levels truly "fun" to play at all, however impressive they may be.

I focus on the negatives to point out the side of LittleBigPlanet many critics seem to have ignored. The game is filled with positives that I haven't touched on simply because they are so numerous, obviously, and well documented. The art direction and in the game is simply unparalleled; it's truly astounding. LittleBigPlanet is easily the best looking PS3 game, if not the best looking game of the current console generation. The multiplayer is great, and unfortunately, not fully implemented nearly enough! Having a four player simultaneous platformer is mindblowing, but neither Media Molecule nor the general community created many levels that take full advantage of having four players. Still, the ability of a player to pop-in and pop-out whenever makes LittleBigPlanet an extremely ideal choice of game while player with gamers of different skill levels. A less experienced gamer would have just as must fun as an experienced one, without either one hindering the other's experience. Sackboy is customizable to the extreme, and you could literally spend hours making yourself unique and interesting.

Despite astounding graphics, a fantastic concept, and a robust level editor, LittleBigPlanet feels like excellent design with flawed execution. However great it may look, or fun it may be to play with 3 friends, the platforming itself is flawed at its core and the levels simply don't make for fun platforming experiences. It may be one of the best 2d platformers we've seen in ages, but that hardly makes it stand out among certain 8-bit and 16-bit competition it may have. LittleBigPlanet certainly has a host of problems, but keep in mind that I focused on the negative for your benefit, and it's still a good game albeit much less than promised.
Review Page Hits: 0 today (388 total)
mediahook