About as much fun as the idea of drinking urine out of a snake skin. 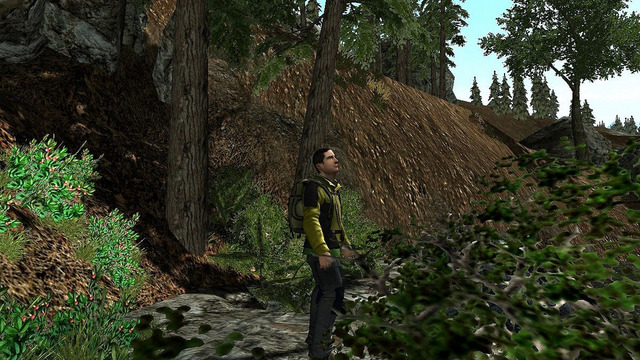 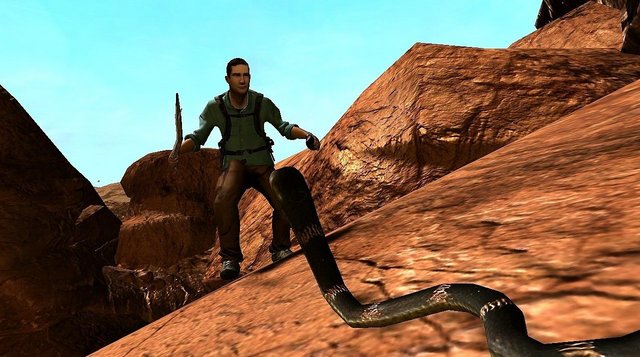 A game, based on a TV show, is going to suck. And suck this game does. Since my trophy addiction has me playing anything, regardless of quality, I knew it was only a matter of time before this game got a spin on my PS3. Now that I am done with it, I am not sure what to think. I know this is probably one of the worst games I have ever played. I know that it was a very easy platinum. But was my 15 hours of pain and suffering worth said platinum? I'm not sure, bear with me (pun intended) while I try to figure that out.

The game is based on the TV show of the same name, starring Bear Grylls. The camera follows Bear around as he does some really stupid stuff, but it's all in the name of survival so it's kind of fun to watch. He constantly puts himself in situations most normal people wouldn't want anything to do with and he somehow manages to stay pretty chipper for the camera. I've never been a huge fan of the show, I catch it here and there, so when I heard a game was coming out it wasn't something that really caught my interest.

Just like any easy platinum, of course it was only a matter of time before it hit my radar. I'm still not sure if I wished I never heard of it or if it was nice to put another trophy into the case. The game more or less follows several episodes of Man vs. Wild and puts you in some of the same situations that Bear has actually been in. There are 5 total locations to travel through and even though the game looks awful, the areas are varied enough to not all feel the same. You will go through the Rockies, Everglades, Egyptian deserts, a deserted island and a snow covered area in Peru. All of the maps are a decent size, but since the graphics are so awful, they aren't exactly a pleasure to roam.

The game-play is actually kind of varied and I think there are some OK ideas that just suffered from poor execution. There is your basic running, walking and climbing, but the game also includes challenges like building a fire, fighting animals, jumping on vines and cooking meat. Each action has its own set of controls. To build a shelter first you must find the required objects and then you need to use the right and left sticks to put the items together, hold them in their designated spots for a certain amount of time and then your shelter is built. To make a fire you, again, need to find the required items but after that you need to pick a method to start the fire. You can use a flint, wood or bow. All of the options are unique and they try to somewhat mirror the motions of real life. For instance the game has you move the left and right sticks up and down to simulate your hands been rubbed.

Even though there is variety in the gameplay, it's so poorly put together that it is rarely fun. On the last level you have to catch a horse, break it and then ride it on to a train. The game gives very poor direction on what exactly should be done to make this happen and it turned into a hair pulling experience. On top of random events that are either boring or poorly put together, the jumping controls flat out suck. At times I would miss my jump entirely or I would hit the side of the mountain and kind of drift down the side. Then there were times where Bear randomly did front flips to cross an area. Every time that happened I had to laugh a little because it's so random in a game that is trying to be realistic. Another thing that drove me nuts was the use of a "grappling" hook in which you had to rotate the right stick as fast as you could and then aim with the left stick to hit your target. It was annoying, to put it politely.

At this point you might be wondering if I have anything good to say about the game. I don't. It's a cluster of bad controls, terrible graphics and annoying gameplay. There is no story or narrative. There is literally one reason to play this game and that is trophies. If you don't care about trophies, just stay away. There is nothing fun to do here. The only thing the game does well is Bear's voice acting but that's because he's just playing himself. I guess if you are a huge fan of the show there might be some redeeming qualities but I really doubt it. Most people will play this game to add a platinum trophy to their collection and move on. That's all this one is good for.
Review Page Hits: 0 today (93 total)
mediahook