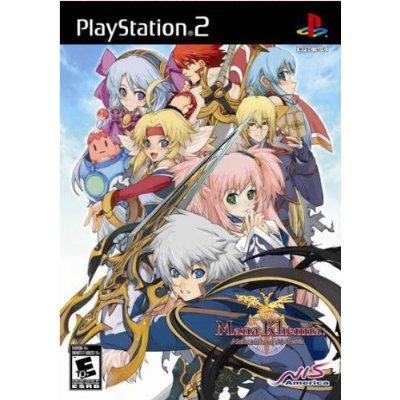 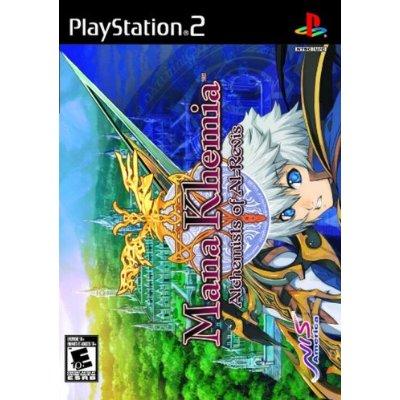 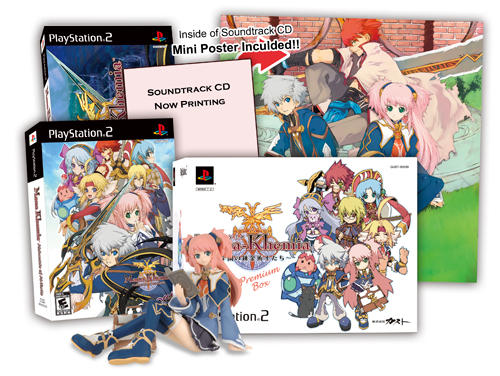 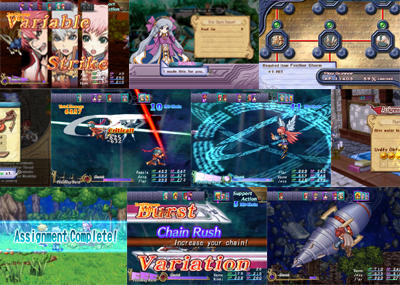 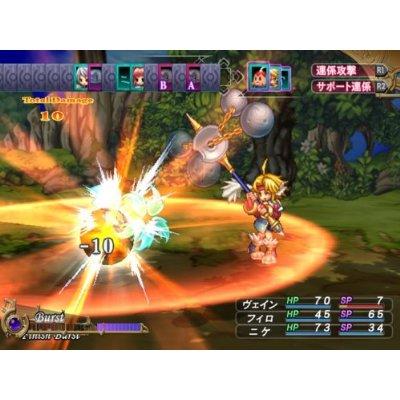 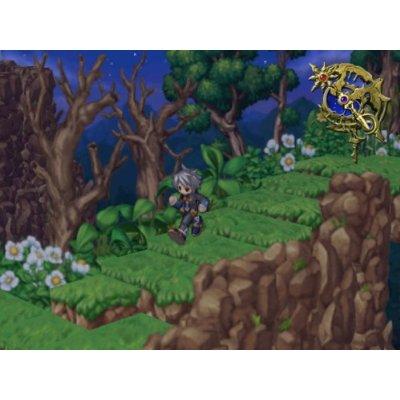 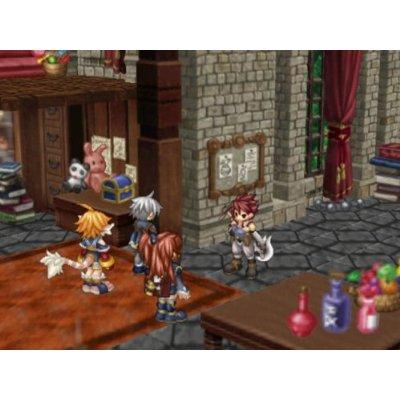 Gamplay: 10/10
In terms of gameplay, Mana Khemia really has a lot to offer fans of JRPG's. Basically, Mana Khemia takes place over the course of four years at a school for alchemy and is divided into twelve chapters. While at school you attend classes and complete assignments that teach you different recipes and ingredient collecting methods. If you pass the classes, then you receive free time (If you do not achieve passing marks, then you are required to attend Detention). During free time you can advance your friendships with classmates from your workshop by activating various side-plots (these side-plots determine the ending that you receive), you can explore the areas off campus to search for synthesis materials, you can complete jobs to earn Cole (money), you can collect bounties on certain bosses, or you can synthesize items, weapons, or armor that you can use yourself or sell to certain NPC's. Usually, when free time has ended, an event occurs that drives the plot to the next chapter.

Alchemy is the most important and one of the most enjoyable aspects of Mana Khemia. Alchemy is what allows you to create the majority of weapons, armors, and items that you will equip and use during the game. Additionally, Alchemy, not levels (typically seen in most RPG's), is what determines your growth (Hit Points, Strength, Defense, Speed, Spells, Number of Attacks, Abilities, Etc.) in the game. The game has a "Growth Book" that keeps a record of all the different syntheses that you have created arranged on a grid. Each unique synthesis unlocks specific attributes that can be purchased with AP (attained via normal battling). This allows you to increase your stats and abilities (The game rewards you for creating different items and for battling enemies) and prevents gamers from over-leveling their characters (Keeps the game challenging). The only complaint that I have about item synthesis is that it makes you create weapons in a room separate from your workshop. This creates a lot of wasted time, when you are forced to run back and forth between the two rooms.

Battling, although not the most important aspect of the game, is just as entertaining as the item synthesis. Battles resemble fast paced fighting games similar to the Street Fighter franchise with a turn-based card system that incorporates the characters' and enemies' speed attributes. Out of the eight possible characters, you choose three to compose your main fighting group and three other members to provide support. Characters that are in the fighting group deal and receive damage, while characters in the support group rest and regain HP and SP. During a fighting sequence, one of the main fighters can call or "tag" one of the members in support to take his/her place on the battlefield. Other aspects of Battling that are unique or enjoyable: Battles are not random. There are red blobs that represent enemies in the dungeons. If you run into or slash one of the red blobs, then you are taken to the battle-screen. However, if you do not want to fight, then you can try to run past or jump over enemies. If you utilize an enemy's weakness, then you can daze them (causing the enemy to loose its turn) or cause a "Burst", which allows combo hits and special "Finishing" moves. When exploring dungeons, real-time passes from morning to night. During the night, enemies are more aggressive (harder to avoid and jump over), faster, and stronger.

Another unique and interesting (not to mention time saving) aspect of gameplay is a schedule posted on the board in the workshop. This schedule allows the main character to select task sharing among his friends. During the beginning of the week, you can select the main character to choose certain members of the workshop to complete certain tasks. The tasks include; creating items, weapons, or armor that have already been synthesized, searching dungeons and gathering ingredients, or joining you to increase their AP. Each, individual character has strengths and weaknesses when it comes to finishing these tasks. Some collect items from dungeons faster and some have stronger Alchemy skills. Even though a character has been given a certain task to complete, he or she will still join you in battle. Once a given amount of time has passed, that character will give you the items that were created/gathered or tell you how much AP was gained.

Learning Curve: 10/10
The game has numerous tutorials incorporated into the classroom assignments and an Encyclopedia for all of the terms used in the game. Therefore, as long as you keep up to date with all of your syntheses and using the Growth Book, the game should be pretty straight forward. However, the game still provides a challenge if you decide to master all of the possible item combinations, attack/defense bonuses, finishing the Bonus Dungeon, and completing your Encyclopedia and Growth Book.

Music/Sound: 8/10
The game has a soundtrack, background music, voice-overs, fighting music, and sound effects. Nothing special or memorable, just adequate.

Graphics: 7.5/10
Think Chrono Trigger for the Super Nintendo. GUST via NIS America obviously decided to stick to the classic JRPG character graphics for traversing the environment intermixed with character portraits for dialogue. The graphics are not bad, but they are very outdated for the PS2. However, the cartoonish, 2D sprites that represent the characters have a nostalgic appeal to them that adds to the game's overall lighthearted approach to gaming.

Storyline/Plot: 7.5/10
When compared to the very dark, macabre plots/stories encountered in majority of JRPG's on the PS2 (The Shin Megami Tensei Collection), Mana Khemia utilizes a very lighthearted, comical, and cute approach to plot development.

The plot relies mostly on dialogue and has very few cut-scenes. If you have read the Harry Potter Books, then you have pretty much seen the story for Mana Khemia. Similar to J. K. Rowling's books, Mana Khemia's plot starts with a young, orphaned man with a mysterious past living among normal people, who do not accept him because of his strange powers. Then, the main character is accepted to a prestigious school to learn magic... I mean alchemy. Pretty much the rest of the story involves going to school (Al-Revis Academy) and the friendships you create. Along the way, you are occasionally pestered by two students; Tony and Renee, who are instructed by a mysterious figure to interfere with the main character's attempts to succeed (think Draco Malfoy). The plot continues like this for eleven chapters with occasional glimpses into the main character's past. Then, before graduation, the final boss appears.

Replay Value: 8/10
The game has eight different endings (one for each playable character) depending upon the conversations that you have with the classmates in your workshop and how much free time you achieved. To view all of the different endings without having to start over from the very beginning, you can save the game at the start of Chapter 10. Then, finish a different Character Quest to see all seven "good" ending and then choose not to finish the Character Quests to see the "bad" ending.

Additionally, Mana Khemia has a New Game+ option that allows you to start the game over from the beginning. This allows you to keep all of your Cole, Growth Book percentage, and Encyclopedic achievements in addition to opening a Bonus Dungeon with 59 floors of new enemies, bosses, 21 exclusive items, and 10 bonus materials to create super attributes for your weapons, armor, and items.

Overall: 8.5/10
If GUST had worked a little bit more on the Story/Plot and Sound, Mana Khemia would easily have been an amazing game. Overall, I enjoyed the game and would recommend buying it. You can still purchase an extremely cheap, newly released, bilingual version of the game online. This version, sans the soundtrack and poster, is half the price that the original, Premium Edition was when it was released in April of 2008. The gameplay is very enjoyable and the game is fairly long. It will take about 50+ hours to play through everything your first time (I highly recommend not using a Guide or Walkthrough for the game).

Also, I am really mad that the Mana Khemia: Limited Edition Scholarship Box Set is sold out. For only ten dollars more than the Premium Edition, the limited set included the game and a few extra goodies, including an exclusive Study Hall Jess Figure (1/8 Scale PVC and ABS plastic alloy).
Review Page Hits: 0 today (158 total)
mediahook