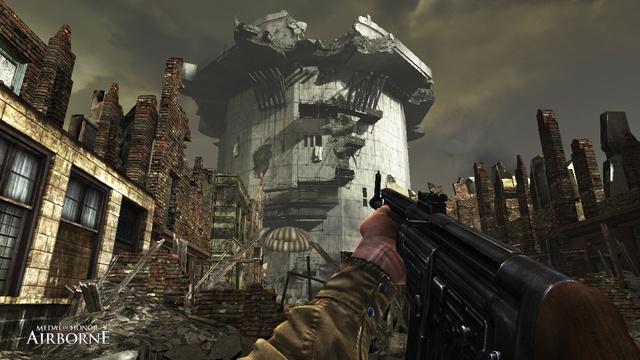 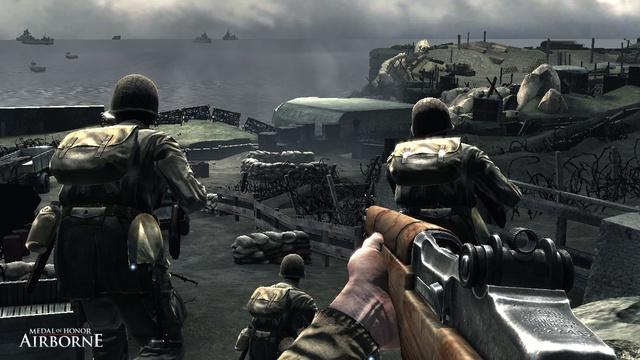 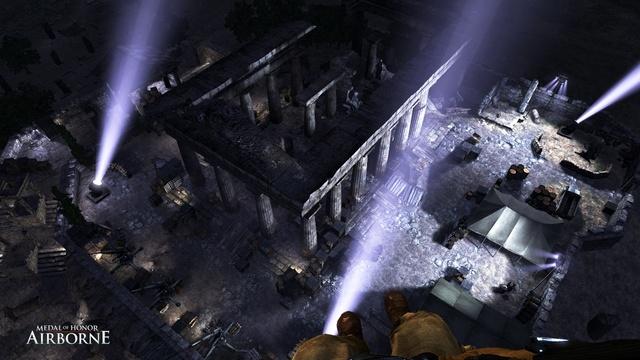 The Medal of Honor series has been through a rough stretch. For the past few years, it has gone downhill and never picked up enough steam to get back on top. With stellar performances from World War II rivals like Call of Duty, Medal of Honor needed something to break it out of its funk. EA had their hopes set on Airborne, a reinvented shooter that lets players choose their own path through levels and customize their weapons. Unfortunately, Airborne is not as great as imagined and turned out to be another mediocre addition to a dying series.

Airborne follows the efforts of the 92nd Airborne division who parachute into battles during the second World War. What makes these battles so interesting are the fact that you begin each level jumping out of a plane, gliding your way to any starting position you choose, for the most part. In each level there is green smoke which designates a safe landing spot. If you happen to land outside of the green smoke area you will soon be blasted without mercy before even hitting the ground. There are also only an average of two safe spots on every level, making your "decision-making" not hard to manage.

When you land, you are dropped into every level with a set of objectives. They vary depending on where you start, but there are always the same boring missions over and over again; things like destroying an anti-air gun at Point A then returning to Point B to hold off an enemy attack. Mix around a few decals and offer up new locations and you have the basic feel of Medal of Honor: Airborne. But the inconsistencies don't end there. You have to deal with a completely uneven difficulty the whole game. Enemies are crack-shots, meaning they will hit you wherever you are. Crouching has no effects to your location as you will get hit, and even when you are hiding behind a car or wall, enemies seem to be carrying armor piercing rounds that will kill you in one hit.

The AI is also dumbfoundingly uneven. During some levels you might have enemies flank you, trying to outnumber you in sheer force. But in another, enemies fire at walls or face in the opposite direction. Both of these types of enemies can be brutally painful to take down, for you have ace shooters combined with idiots with guns. You can see the problem that arises here. If you happen to move a snail's pace through every level you will be bored of the dull locations set in such places as a house, followed by a two story house. The originality is amazing.

EA also implemented a new upgrade scheme for the weapons. Whenever you use a weapon constantly it will eventually upgrade depending on how many enemies you hit. So there could be times when you are running around shooting and the screen will slow down, and all of a sudden you will pull out a grenade launcher add-on from your pocket and equip it to your gun. WHAT? Does that make any sense to you either? This is the most ludicrous addition to a shooting game since Oddworld: Stranger's Wrath flung chickens at people. Yes, an Oddworld reference in a Medal of Honor game. Not only does this feel so out of place, but it's done all together wrong. Some weapons take five shots to upgrade while others need hundreds. Guess which weapons you won't be using much?

There are also the effects of a never ending loading screen. Whenever you die you are forced to restart the level by jumping out of the plane. Meaning, you have to sit through nearly minutes of a loading screen every time you die. See how long that lasts for you. The cutscenes are often unskippable, so if you die right before one, grab some popcorn and prepare to watch some WW2 films.

The multiplayer is hardly any better than the single player. You have two groups, the Axis and Allies factions who fight against each other in matches like high ground, capture the flag and deathmatch. But herein lies the rub. The Allies get to jump out of a plane at the start of every match, while the Axis are... running around on the ground. In nearly every match I was in, the Allies won because of that advantage. I guess EA thought the Nazis deserved to be taken down an even bigger notch than before.

Medal of Honor: Airborne tried to reinvent the series by offering the ability to start anywhere in the level and upgrading levels. Airborne failed to make the Medal of Honor series any better and actually brought the series down farther than it originally was before. Only play Airborne if you are a die-hard fan of the series. Otherwise set your sights on much more rewarding shooting experiences.
Review Page Hits: 0 today (329 total)
mediahook