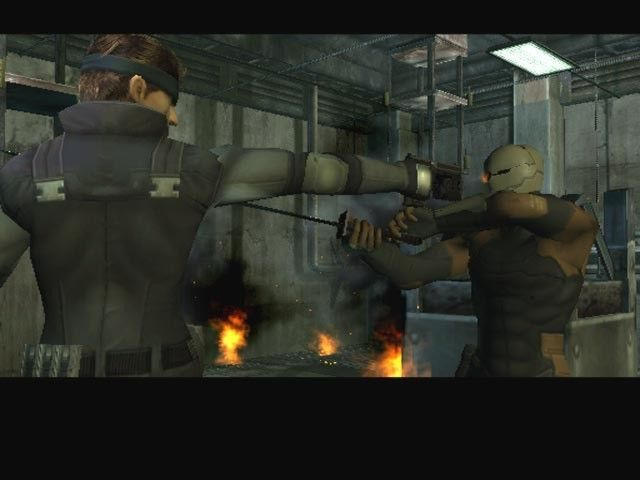 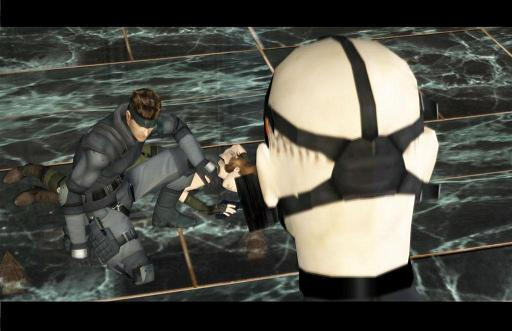 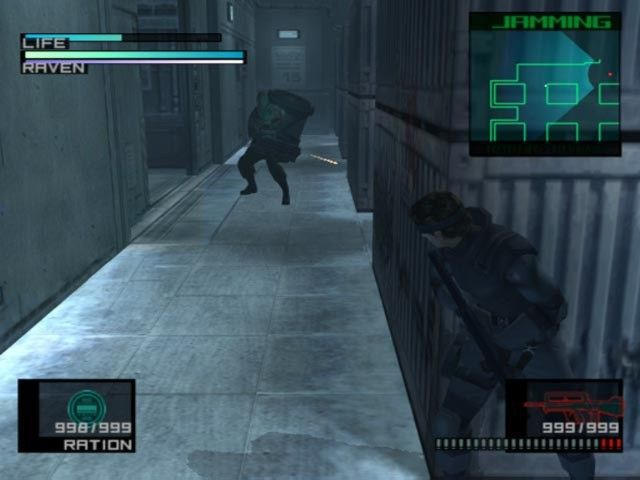 In a surprising turn of events, Konami remakes the PlayStation classic Metal Gear Solid for the GameCube. Hideo Kojima, once quoted as saying the GameCube wouldn't be hosting Metal Gear Solid due to the violent content that the series conveys, has managed to recreate the game and, at the same time, re-create it into one of the most in-depth and downright bloody videogames known to the console world...and it even outdoes a good portion of the PC FPS genre. That means something.

And when I say downright bloody, I do not jest. Men getting cut in half (both ways), dismemberments, corridors lined with bloody carcases...the game took the mild gore and violence found in the original and turned the amplifier up to MAX. Any more graphic and the game might have earned itself an "A" rating... that's A as in "No kids under 21 can even look at this", ESRB style.

Snake is sent into a Nuclear-Disarmament station to assess the threat of a group of terrorists. He's to save two influential hostages and confirm whether or not the terrorists actually have nuclear launch capability. One man, one mission, hundreds of enemies, no one to trust. Hope you're feeling lucky.

Metal Gear Solid: The Twin Snakes takes the game engine found in The Sons of Liberty, squeezes it into two teenie weenie GameCube discs, straps a chute on their back and says, "GO!". The re-creation is fantastic. Fans of either MGS1 or MGS2 will find their favorite things are still intact. The game design itself, level and goal-wise, is identical to the original, but it feels like you're playing through the intense, graphically-superior MGS2 at the same time. Some elements from that game, such as the tranquilizer guns and sniper rifles, have carried themselves back into the last generation and have done it well. Though I sometimes find it difficult to understand how, after using the PSG1-T (a tranquilizer rifle with snipe zoom) against a boss, once they've been put to sleep and the battle is won, they're riddled with bullet holes. Maybe they shot themselves while my back was turned? Couldn't be a design flaw.

Anyways, if you've played through the original Metal Gear Solid, you'll be able to go through MGS:TTS with your eyes closed, unfortunately. There's a few new segments, but nothing to crow about (save the fantastic new ending, that is). I suppose I was a bit disappointed, walking into MGS:TTS and expecting, say, the difference between Metroid and Metroid: Zero Mission (a lot)...but the game still has that charisma that keeps you going.

The voice actors have given it another go in this adaptation: You'll recognize most of the cast returning from the original game, but they replaced Mei Ling and Grey Fox, among others. A shame as they were superior. The new guys ain't too bad, but...meh. But they generally sound better in this game than they did before. Naomi sounds like she's on some sort of tranquilizer, to be frank, and Liquid coulda pumped up the tone of voice while his character was violently shaking his arms around the screen, but again, not too bad. MGS has, I believe, the most spoken dialog in any game to date, ignoring that stupid girlfriend of Raiden's from MGS2 who has more spoken dialog than any spoken dialog put together...ever. But we'll leave that one be.

Some things in this game are easier, some are harder. I didn't remember Metal Gear being as hard in MGS for the PlayStation as he was in this game, but I suppose that's a good thing. On the other hand, fights like Shalashaska have become ridiculously simple.

I do, however, dig the game's extras. A lot more detail went into this remake than MGS2: Substance. Glad to see Hideo learned his lesson. For instance, there's a surveillance-camera account of Snake's initial briefing now included, so you can see who, what, where, and why. And you can mess with the cameras. Always fun. The briefing lets you witness the death of the Mullet (YEA!), so that alone is worth the price of admission. I was tickled to find that, if you cut the briefing short, Snake actually turns the Colonel down initially. Lots of male bonding in the briefing. Also about 30 minutes of briefing to listen to. Good watch if you're bored.

Another nifty little bonus includes...Mario and Yoshi! Amusingly, you can find the duo later in the game. A hint: shoot them. They also include a few rumble gimmicks, such as Naomi using the "nanomachines" in Snake's body to give him an arm massage (the player is instructed to place their controller on their arm). Ya know, it's just little stupid stuff like that that makes it worth the price for me.

The cutscenes in the game are a vast improvement, technically, on the previous ones and there ARE a lot of cool new things done in the cutscenes that get the adrenaline pumping, but overall, I was disappointed. Disappointed because Kojima decided that using "Bullet Time" fifty times throughout the cutscenes would be a good idea. If I see one more bullet-time cutscene anywhere, I'm just gonna hurl. MGS was good, Matrix was fine, Max Payne was pushing it, but now MGS:TTS just ended my amusement with bullet time. Here, it's overkill.

The repetition the game entails hasn't exactly survived translation or time, either, and what was once a game that forced you to play it beginning-to-end without stop has become slightly "...Oh, I think I'm missing Digimon. >click<", but the steadfast gamer will be rewarded in this game's play when all's said and done. Fantastic game if you've never played MGS before. So-so if you have. Not worth 40 bucks if you've mastered MGS.
Review Page Hits: 0 today (1,238 total)
mediahook