The Second Metal Slug outing on the NGPC is More...of Everything. 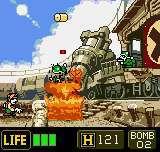 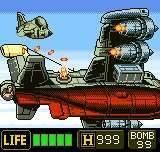 Metal Slug: 2nd Mission (MS:2M), the second outing of the Metal Slug Series on the Neo Geo Pocket Color, is all about being bigger, better, and having more than the first game. You still fight against the XX Rebellion through the same choose-your-own-path map with some added and welcomed additions.


Gameplay & Control
Gameplay has received a huge improvement in MS:2M. There are more weapons like a grenade launcher and an electricity gun, more vehicles like submarines and rafts, and more levels to explore. As you play through you still collect coins and weird items, like a teddy bear that the enemies drop for points to get more continues but now rescuing POWs mean a lot more to your score. To get a complete game and to continue farther you need to rescue all the enemies from each level and do it without dying. If you die the POWs you already rescued won't count and you can't go back to get them.

Adding new vehicles switches up the gameplay more too, in the end making it even more fun to play. Along with the fighter jets and the signature Metal Slugs, you can now man submarines. The cool thing is, if you are defeated in the submarine you don't die but rather must escape in a life raft that your character must paddle. The controls for the vehicles work well but sometimes they are a little sluggish (no pun intended) especially the submarine. This lends to the realism in controlling big metal vehicles but can get you shot.

The levels are more diverse this time around as well, adding more gameplay to the mix. There are your standard ground levels but the addition of the submarine leads to underwater and above water levels. The new bases that were added change things up quite a bit. For example, one of the bases has you entering into a warehouse where capture aliens are kept and experimented on and you get to battle the aliens as well as some UFOs.

The control for the character is much the same as it was in First Mission. The A button still fires and the B button still jumps. A nice change though is that the Option button, instead of switching the guns with grenades and vice versa, now is used to toss a grenade when pressed lightly. The rest of the controls are unchanged but that's fine because they didn't need to be changed.


Graphics & Sound
The graphics have received an improvement as well. The game is more colorful in general and everything is more detailed including the characters. The bosses are bigger and more colorful as well, taking up the entire screen and having better explosions when you take them down. The game is impressive graphically on the NGPC and the slowdown has been toned down as well. It isn't totally gone (some intense and hectic areas still slow down a little during gameplay) but it's better. The sound design has also improved creating an even more military style of marches and ballets that play well while you advance through the game. Sound effects, especially explosions, are nice. The only thing that sounds a little silly are the sounds the bad guys make when they die. But it's a good kind of silly.


Replay Value
Unlike Metal Slug: First Mission there is a lot more to do in MS:2M. Outside of achieving 100% by rescuing all the POWs SNK has included some other modes to add replay value. Selecting Office (the options menu) from the main menu you can choose to play Time Attack. Time Attack has you playing through each stage independently to try and get the best time for that stage. Also from the Office you can change the Set Up of the game and view the Rescue list from each level to see how many POWs still need to be rescued.


Metal Slug: 2nd Mission improves on every aspect over the previous installment. The gameplay is better, the graphics are more detailed and overall its just a better game. This is definitely one of the must have titles for the Neo Geo Pocket Color.
Review Page Hits: 1 today (640 total)
mediahook