Same great Metroid gameplay and storyline you've come to expect, and with a little different art style to boot. 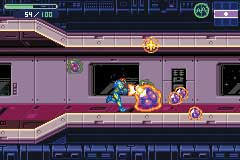 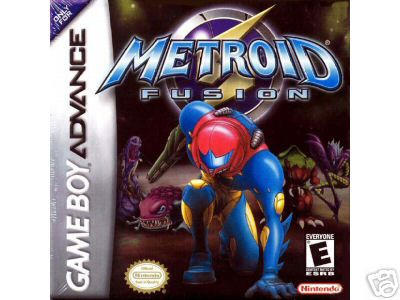 Metroid Fusion is the first real return of Samus since Super Metroid for the SNES.

This game is a heck of a lot of fun and is challenging while maintaining the highest standards of 2d game play. Most importantly the game respects it's heritage and a lot of the classic game play that made the previous games so great is intact in an updated portable bite size Gameboy Advance cartridge.

This game actually has a bit more story line and plot to it than normal, but it is not misplaced. The opening credits list this game as Metroid 4 so the story line fits directly in with the other 2d games.

The graphics are really tight and the GBA delivers some wonderful 2d visuals and game play.
The sound effects are pure Metroid and the music is well done for the GBA.

This game was released on the same day as Metroid Prime, the first person shooter on GameCube, and both games can link to unlock the original Metroid game in emulation. You can also unlock the ability to play using the Metroid Fusion suit in Prime.

I really hope that Nintendo breaks tradition and make a sequel to this game on this platform (not counting Zero Mission). I don't want to have to wait for the next generation of Gameboy for another Metroid game but there has never been two Metroid games on the same system.

I don't really know what else to add. This game is just about what I had expected and I was really pleased with the game over all. This really is the hand held rebirth of the Super Nintendo. I would recommend this game to everyone who has been playing games since the NES days.
Review Page Hits: 0 today (761 total)
mediahook