A solid sequel -- one of the few times that having more of the same is a good thing. 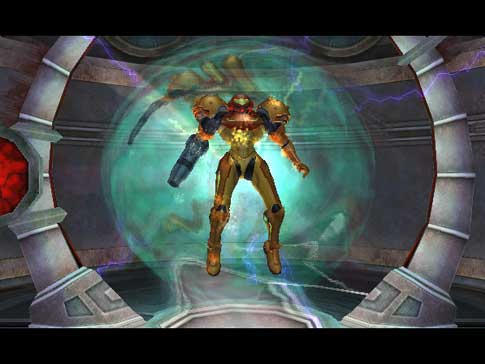 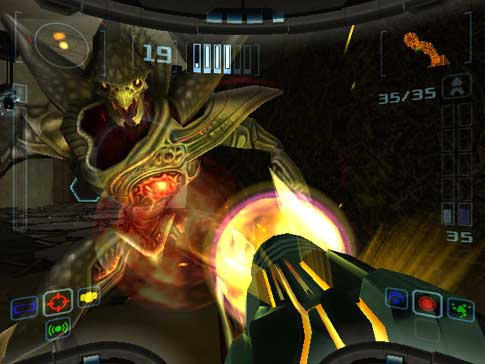 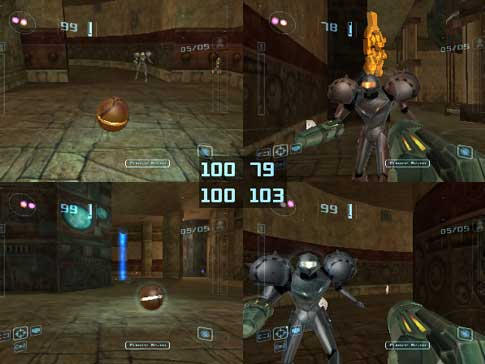 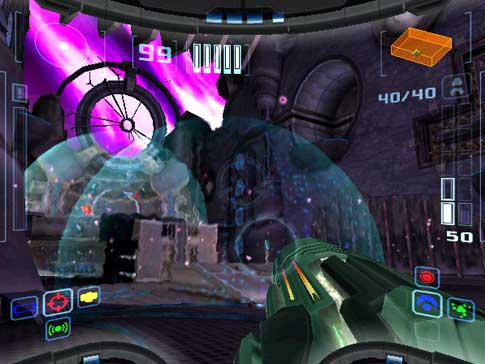 While not a whole lot has changed since Metroid Prime, there should be little complaints. Metroid Prime 2: Echoes has taken a lot from the previous game, and tweaked things where needed. The main "focus" in MP2:E, is to help restore balance to a world, that has been split into a light half and a dark half. While the story takes place on the same world, the light and dark dimensions are constantly at battle, and the dark half is gaining an upper-hand.

During your exploration of the world known as Aether, you are going to experience almost everything twice, from the terrain, to the enemies, to the puzzles. Some of these things actually require that you use both dimensions to figure everything out. You have the ability to find portals scattered throughout the world, transporting you from light to dark Aether. This is a requirement to solve most puzzles -- find loads of power ups, or just to make sure you get a 100% scan rating. These conflicting worlds are also the reason for your biggest opponent in the game.

While most will find this aspect of the game more rewarding, I found that it felt like more of a gimmick to extend the game. Traveling from one world to the other can be very time consuming, as you travel across two or three maps, just to get to the nearest portal. That gripe is for the first half of the game though. After that, it seems to even out a bit. Enemies on the dark side also are a bit more rare. This is because, anytime you are in the dark area, your health will slowly diminish over time. Again, this adds another level of challenge to the game, but I found it to be an annoyance which caused me to "sit" and regain my health quite a few times. Doing so really slowed down the action quite a bit. Puzzles that require you to switch from dark to light worlds as well, can be time consuming. I honestly wouldn't mind it so much, if there was more things to fight.

While there are plenty of areas to explore, I dislike the lack of things to fight at times. I understand they couldn't jam-pack areas with monsters, as you have to do plenty of backtracking, but near the end of the game, it just caused me some boredom, and a few times it was the reason I saved, and started playing something else.

New weapons in the game also take advantage of the light and dark story line, as using certain beam-type guns will kill certain enemies in their respective dimension, faster or easier. New visors have been added as well, but I found myself using them even less this time around. The scan visor however returns, allowing you to scan pretty much anything of importance. If you are like me, you will pop the scan visor up every time you reach a new area, and collect everything (and this is one way to earn extras in the game). Doing so adds a lot to the story line, but is time consuming. You could pretty much finish the game without ever using the scan visor other than to unlock a door, or find a key, but I'd suggest taking the time to look around. There are some objects that will give you hints, while others that seem to have no use in scanning at all.

The graphics haven't changed much, but no change was needed. These are still some of the best graphics you will find to date, for the 'Cube. The sound effects are top-notch again, but the music can get very old, very fast while doing mindless map hopping just to find one room, turn around, and go back.

Along with the single player, comes a multi-player mode. The multi-player mode reminds me much of the old Banjo, Star Fox, or Donkey Kong versions. They are neat to check out, but if you have three other friends over for a frag-fest, you are most likely going to spend your time somewhere else. Nintendo claims they made this multi player for the Metroid fan, and not the typical FPS fan. But having fun playing is the name of the game, no matter what game you play, and this multi-player is certainly not that. Plug in a second controller and take a look around, but that's about as much use as it will get.

Metroid Prime 2: Echoes has given us what we wanted, but there are a few more flaws this time around that hold it back. That being said, if you liked the first one at all, this is a must-have for your collection. Just don't expect it to be a reason for you to call in sick to work in order to play.
Review Page Hits: 0 today (641 total)
mediahook