Just like the board game, except for your Nintendo Entertainment System. 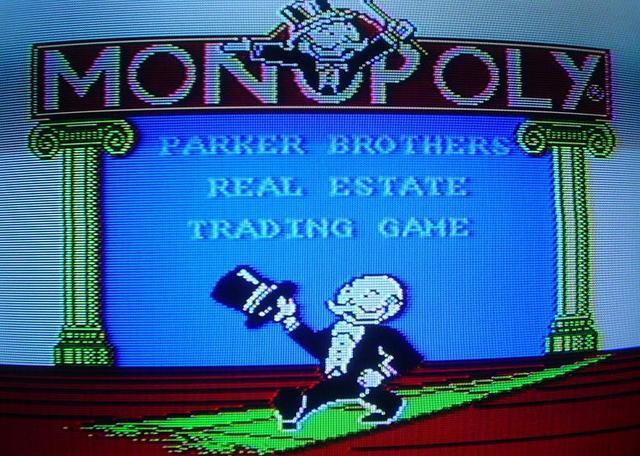 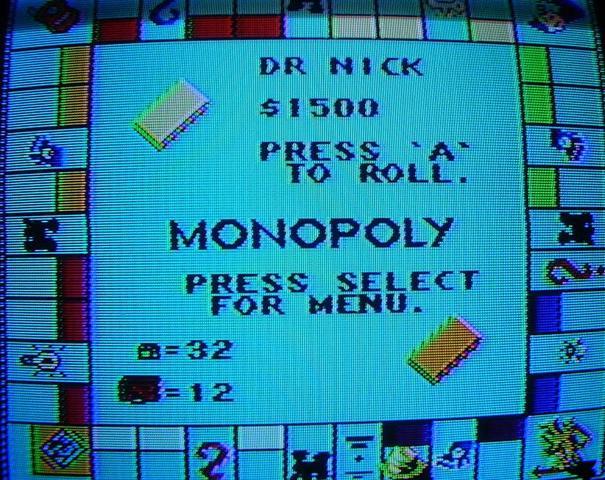 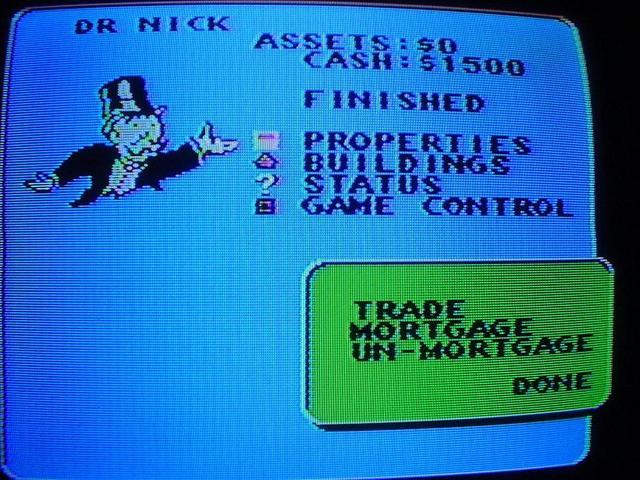 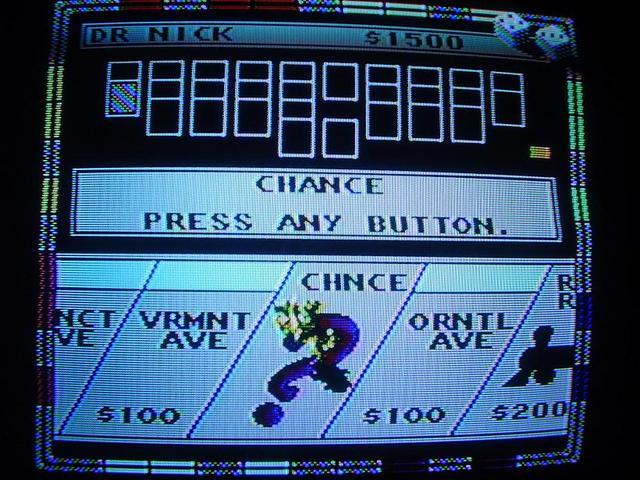 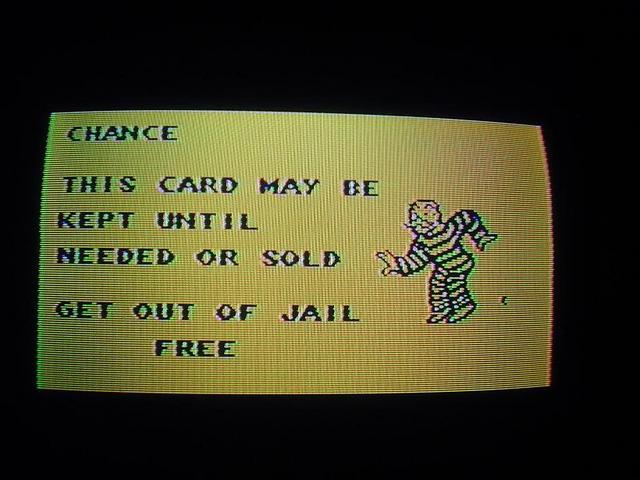 For this review I am going to assume that you have played the board game called Monopoly and that you understand the gameplay and rules. If you have never played the game or have forgotten the rules, please use this link to go to Hasbro's site for the official Parker Brothers board game.

I'm a big fan of the Monopoly Board game, but it gets old being accused of cheating when you win or having a family member toss the board into the air and spilling all of the pieces when they get frustrated. Thus, when I saw a complete copy of this game for the NES, I picked it up.

Now I can play Monopoly with my family/friends (up to eight players can participate) or by myself versus different levels of difficulty and not have to worry about having all the game pieces, counting out the money, rolling die, your cheating cousin, or angry players tossing the board.

Basically, this is Monopoly for the NES. All of the rules are the same. A typical game will last as long as the board game and depends upon the number of players and their overall skill. A nice feature of the game allows you to select normal play or to play a "Quick" game, in which all of the deeds are given out randomly before rolling the die.

The game has decent graphics for an 8-bit system, but it can be difficult to distinguish what the game pieces (IE the shoe, wheelbarrow, hat, etc.) are on the board. You have the option to view the entire board, each piece of property individually, what each player owns individually, what all the players' portfolios consist of, and what deeds are still available for purchase. The Chance and Community cards can be easily read and some of them even have animations on them. From what I can tell, all of the cards are included and they have not been scaled back due to cartridge restraints. Additionally, you can clearly see what numbers have been rolled on the die. Basically, despite the 8-bit limitations, you are able to see everything that you would normally see while manually playing the board game.

The sound starts off as amusing and is entertaining, but eventually you will mute it, because the soundtrack is the same, repetitive, and annoying music. The best part about the sound is that the cart actually has human voices telling you when you are being sent to jail and when you are being released. This was a complete surprise to me when I heard the computer state, "Don't be commin back now!" after kicking me out of jail. As far as I know, there are not many NES games with human voices on them. This fact earned the sound extra points for its rating.

The learning curve is not that difficult. Hey, the game basically only has five main buttons (A,B, Select, Start, and the Controls). The controls are basically used to select different menus, to roll the dice, to purchase property, and to change between players. One or two controllers can be used to play the game and you really only need one controller, because the game allows you to go to the next player (determined by rolling die at the beginning of the game) by pressing the A button at the end of the proceeding player's turn. Also, the select button can be pressed to bring up the main menu that can be accessed by all players at any point in the game. Most people that have played a video game will be able to start and play the game with little effort. However, for some of your family or friends, it may take some time for them to get accustomed to the controls. If you are a patient person, then you can easily teach new players how to use the controls because the overall learning curve is not that high. However, this really only applies to people that have never played a video game before.

If you do not have human opponents sitting around to start a game with, the game has a nice feature that allows you the option to play against the computer (Also, you can mix and match human and AI players). The game actually has different difficulty settings and the AI is fairly intelligent for the NES. Despite your numerous attempts, your AI-bot opponents will not trade their Boardwalk and Park Place for your Electric Company and a "Get Out of Jail Free" Chance card. In fact, the game actually remembers how you treat the other AI-bot players. If you treat them kindly and make fair trades, the game will do the same. However, if you harass them with unfair and ludicrous trades, they will increase their asking prices for their deeds during a trade.

The Replay value of the game depends entirely on how much you enjoy playing Monopoly. Since the cart does not support a battery for saving progress, you do not accumulate bonuses for defeating certain opponents, you can not unlock bonus features, and you can not save a profile. Additionally, the game does not have a High Score chart. Basically, when all but one of the players see the the Bankrupt scene (That player eating out of garbage can) the game ends and the winner's name and score are shown with a small animation. Afterwards, the cart resets and you can play again. This is somewhat anticlimactic and hurts the replay value of the single-player experience. However, similar to the board game, this video game is intended for multi-player.

The main con against the game is that you can not set up "House" rules. Everyone enjoys adding certain aspects to the board game to enhance gameplay. For some, it involves giving out $500 in Monopoly Money to the first player to land on Free Parking or $100 for the first person to pass Go. However, this cart does not allow players to add this familiar feature to the game.

If you love Monopoly and you have a NES systems (even a system with only one controller, because the game only needs one) you should pick this game up. The cart alone is less than five dollars, which is a lot cheaper than a new version of the Board Game.
Review Page Hits: 0 today (121 total)
mediahook