Play as Beavis and Butt-Head and guide them from their house to a Gwar concert. Travel various locations like the school, the streets, a hospital and other areas to reach the stadium. Avoid enemies like Todd, the principal and a bunch of other misfits. 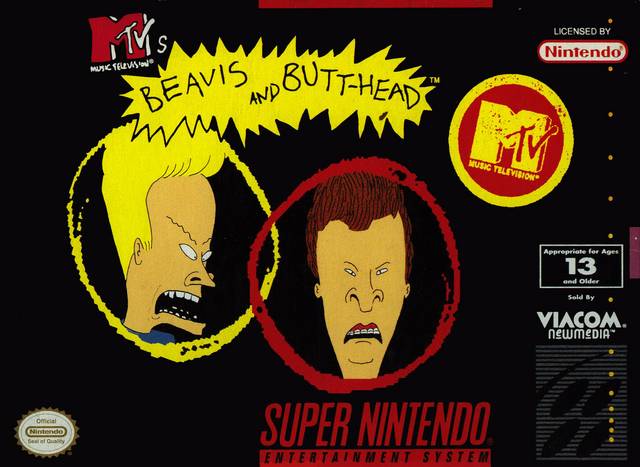 Beavis and Butt-Head is a 2-D side scrolling game that shares the same iconic elements as most SNES games, it isn't very long in length, has a very limited amount of lives to start with and has a hard difficulty. With that aside this game is still pretty good, it hasn't aged very well in terms of gameplay but after all these years it still gives hours of fun and good gameplay throughout the game.

First off let's start with the story and quests in the game. Beavis ad Butt-head are bored of watching television so they attempt to get into the Gwar concert, this is where you begin. The game will take you to 5 different areas: Highland High School, Streets of Highland, Highland Hospital, Turbo Mall 2000, and the Gwar Concert. Each level requires you to reach a certain destination in order to advance to the next. This is where the repetitive gameplay comes in. In each level there are either kids on skateboards that can injure you, ladies with canes, Todd throwing balls at you and other enemies that will toss things at you or run up to you and hit you or knock you down. You have the option to hit them with spit wads, baseball bats with a boxing glove and a few other weapons. Or you can avoid them altogether by ducking or jumping over their attacks. These attacks happen very often and rarely give you a chance to rest. All the quests are pretty much so the same, reach your destination without dying and avoid the enemies. With the entire game as simple as this it does get pretty repetitive and is very noticeable by the second quest.

Each level does offer a few secret areas to explore and it's worth going through them because they offer extra lives, coins or food products. If you pass by a payphone you can check them and many of tem will toss out coins which can be collected and used to purchase snacks from the machine. The downside to this is that when you purchase a snack you must catch it in your mouth otherwise it spoils and you can't use it. Enemies will sometimes drop food but you must also catch it or else it's worthless.

The weapons, despite there being a small amount, are still fun to use. It's fun punching people in the face with a boxing glove and throwing spit wads at the skateboarders. There are even parts where you can have one of your characters ride on the others shoulders and fight enemies like that. Pushing the select button will also allow you to switch between Beavis or Butt-head during the game, however even if one of these characters dies the entire quest will begin again from the last door you entered, regardless of how far that may be. If you never went through any doors you must start from the beginning of the level.

In some areas the gameplay will require teamwork, with a simple button push you can pick up a character and toss him into the air and across the block to continue the quest. The sound in the game doesn't do much for the game, with Beavis and Butt-head laughing and giggling most of the time and other characters silent the whole time and that's pretty much the entire sound. There is some upbeat background noise but with the fast paced action in the game you'd barely notice that there was music.

The game is pretty difficult, especially with only 5 lives. Enemies are constantly rushing you, causing you to have amazing reflexes to avoid them. It's extremely hard to beat the game because of the lack of lives but it's quite possible once you memorize the rate at which the enemies will come at you. After dying many times the game tends to get boring, however it is very addicting. After each death it leaves you with a sense that you can beat it on the next playthrough, causing you to return to it no matter how many times you've died. That is a very important factor when determining what a game is worth.

Overall this game, despite being hard, old and repetitive, is a great game and is definitely worth a play. The sound and graphics didn't open any eyes at the time but for it being almost 15 years old this game holds up pretty well. For fans of the cartoon or anybody who really likes a challenge in gaming this game is definitely worth owning.
Review Page Hits: 0 today (248 total)
mediahook