Pure 80's Heavy Metal; Fans of Operation Mindcrime and Empire, Queensryche are back! 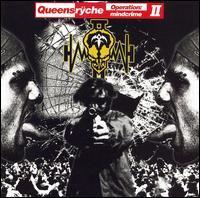 What can I say about this album..... If you enjoyed Operation Mindcrime I and you hated every other Queensryche album after Empire, then you will absolutely LOVE this album! Geoff Tate and Co. have crafted a nearly perfect 80's album seventeen years after the introduction of one of the greatest Progressive Metal albums of our time.

Operation Mindcrime II follows the story of the first album seventeen years after our main character went to prison for his assasinations. He is released and vows revenge; the resulting musical journey follows. Not only does this album sound like it was recorded at the same time as Operation Mindcrime: I, it also sounds like the band is tighter than ever. You almost want to forgive them for all the terrible albums they put out in the 90's - 00's.

The political commentaries follow into modern times, as the lyrical content applies to today's governmental abuses just as they did in the first album. Seventeen tracks of pure concept album, metal bliss. This album smokes, highest recommendation.