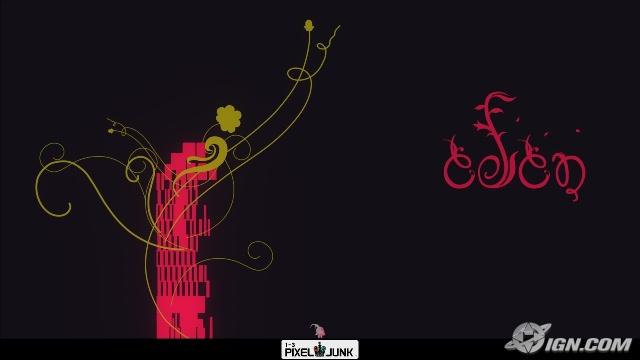 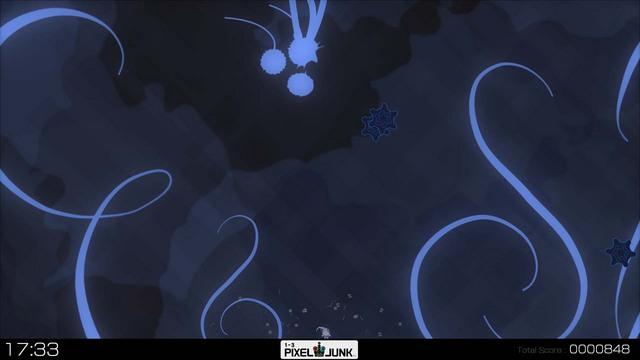 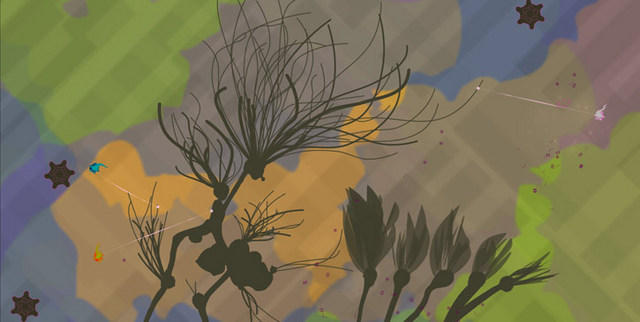 Since the release of the current generation of consoles, game developers have gotten the opportunity to make very creative games that would not work on the $40 to $60 pricing scale games are currently on. Through digital distribution, the companies are able to take their creativity to a maximum level and take more chances, because people are willing to take a $10 bet on a game to see if they like it. PixelJunk has released two games prior to Eden with mixed reaction. PixelJunk Racers wasn't popular among critics or users while Monsters got a good critical reception and a good base of people who loved the game. Now comes Eden. Would it flop like Racers or shine like Monsters?

Eden is a game based on simple platforming and exploring mechanics. You star as a Grimp (a combination of the words Jump and Grip, as those are your most two common functions). The first place you show up is in Eden itself which acts as a hub to the different gardens, online rankings and a few nifty secrets. To get acclimated to the game PixelJunk set up the first level as a tutorial of sorts. It helps you get the hang of jumping, swinging and gripping. These are your only three options for moving. You can not walk to the right or left. This may feel very restrictive at first, but once you get the hang of jumping and gripping, moving around each stage becomes second nature. The goal on each stage is the same, fill each seed with enough pollen so that the seed will sprout into a flower which you can use to travel around the level. To get the seeds full you need to collect as much pollen as possible. Pollen comes from "Pollen Prowlers" which are the main enemy on each stage. To open a Pollen Prowler up all you need to do is hit it with your body or the silk which you can swing from each and every flower. On each level you are searching for 5 "Spectra" which help to grow Eden (the "intro" level of the game) so that you can make it to different gardens. Beside the Prowlers you are also fighting the clock. In the lower left hand corner, time will tick away. Luckily each level has many "Time Crystals" lying around which help to re-fill your timer. Also, once you find one of the levels' Spectra, the time meter refills and allows you to continue your search for the next Spectra.

While this sounds very easy on paper, it's quite a bit more challenging than even I was expecting. After getting through the first 4 levels without much of an issue, level 5 throws some serious changes at you. The Pollen Prowlers, which were so easy to bust open on levels 1 through 4 become much more difficult to deal with. You can still hit them with your body, but now the silk you use to swing from the different types of foliage can be cut by these advanced prowlers. This makes it harder to collect pollen and thus it's harder to fill the seeds, which in turn makes it harder to move around the level. Not only do the Pollen Prowlers change, but so do the levels. I don't want to give away every secret, but later levels in the game introduce gravity shifting and warp holes that move you around the stage in a slightly disorienting manner. This helps to make the game more difficult in the latter stages and helps to increase the game's replay value, as what you learned in the earlier stages almost need to be relearned to continue your success. Also on every garden, with the exception of the first, you are going to run into various enemies that will try to bump you off your flower, or cut your silk while swinging. Each of these enemies can be defeated, but it's a system of trial and error that you discover this. Add all of these elements up and this seemingly simple game actually turns out to be quite the challenge, and while it is a challenge, it is a fun and rewarding one.

The visuals here are very simple, but work very well. On every level the foreground is a solid color with the background being an ever changing trippy set of colors. When plants sprout from a seed it looks wonderful, your Grimp is animated in a simple, but effective manner and the colors never stop changing throughout each garden. Again, simple is the word here, but simple isn't always bad. See another PSN title (flOw) for an example of that. Mix these trippy visuals with a purely electronic soundtrack and you get an audio/visual mix that has to compare to some type of illegal hallucinogen. Each stage has its own song and while the music is at times repetitive, it always seems to fit with the game. The downside here is that if you can't stand electronic (almost "dancy" type music) you are going to have a hard time playing this game as I imagine the beats will wear down on you when playing a garden for 20 minutes.

This game is the first brand new game to come to the PS3 with trophies included. If the 10 stages and 50 Spectra you have to find didn't give the game enough playability, the trophies should help every achievement seeker out there. You can get trophies for finding all Spectra on all levels, opening all seeds in a garden and even one multiplayer trophy for doing some gymnastics with three Grimps. Another thing to occupy time here is the YouTube uploading system. This is first game that you can record and upload to YouTube in game. This means you can make tutorials for every level or just jump around like an idiot and share it with the world. The clips have a 10 minute time limit and it seems like anyone can upload them. This is a first for the gaming world, but I bet we will be seeing this more often in the future.

Multi-player is offline only and can be with up to two other people for a total of three Grimps. There is no change to any garden while playing with additional Grimps, so if you get three skilled people together, it makes the game easier to progress through. There isn't anything different about multi-player and single player, the game stays the same.

Now I know I have spoken about this game in an endearing fashion up to this point, maybe you were thinking I had nothing to complain about... but I do. Two minor things irk me. The first is the lack of online multi-player. This game screams for it, but the developer didn't add online capability. This isn't a huge complaint, as what you get for $10 is more than some games give for $60. My other complaint is that in each garden, once you collect a new Spectra, the stage is cleared and you have to go back again. Let's say you are going for your fourth Spectra on the first Garden. You collect 3 of the previous ones and then go for the fourth. Once you find that fourth you are kicked from the stage and you have to go back and find all five in one sitting. This does give the game more replay value, but in an artificial manner. I'd rather be able to find all the Spectra I can in one sitting and not have to backtrack on every level 5 times just to find all Spectra.

Those 2 minor complaints put aside, you'd be hard pressed to find a better game for $10. If you are a hardcore platforming fan or a casual gamer I think there is a lot to find in this game. It's easy to get into and hard to master. There are a ton of items to collect and a number of trophies to earn. If I haven't convinced you to spend $10 bucks yet, I don't know what else to say. This is one of the most creative and fun games on the PSN as of today.
Review Page Hits: 0 today (71 total)
mediahook