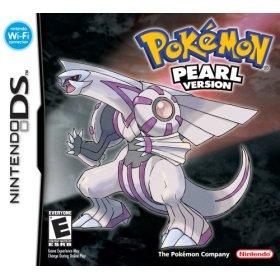 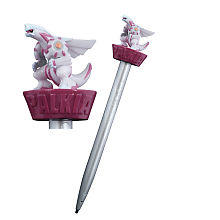 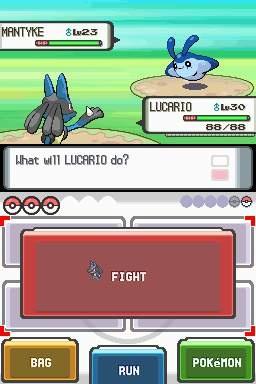 I had been waiting and waiting, and the time finally came. Sunday the 22nd of April at 8 AM, Ebgames opened. I was there with money in hand, intending to buy both new Pokémon games for Nintendo DS. I was so excited, I kinda wet myself (thanks Peyton Manning). Let's get this started.

Graphics
I don't play games for graphics. I want fun, so the graphics in Pokemon Pearl are just decent. There are 3D backgrounds with different building and trees, which seem to jump off the screen. The battle animations are different and so is the run animimation. The little characters improved on the older games, but still are nothing to sing about. They are Game Boy Advance-worthy, but not Next-Generation. There are also still sprites used from Emerald. I was upset by the lack of graphical push, but it didn't bother the gameplay.

Sound
The only good parts were the battle cries from the Pokemon, and they're all different. My favorite is Kricketot's, because it sounds like a wet cat screaming. Other than the battle cries, there aren't really any good sound effects. What I hate the most is when your health is in the RED and it keep alerting you with that warning tone. Also, the music is very weak, because the tunes aren't very catchy, just bothersome.

Story
Oh my God. This story is so ten years ago. Remember the first Pokemon on Game Boy? Pearl has almost the same story as that one. Not spoiling anything (if you've played ANY Pokemon games it won't be a suprise), you stop an evil organization from ruling the world with Pokemon. You meet a new professor who wants you to travel the world and get pokemon info for him. You have a rival and fight them throughout the game. You have to try and "catch'em all." I understand that if it's broke don't fix it, but why but for ten years now??

Gameplay
Here's where Pearl shines. It's a classic turn-based RPG where you battle using monsters. You have at least 40 hours of gameplay just by leveling-up your Pokemon and getting badges by defeating gym leaders. You will love catching the new monsters. The bottom screen has touch buttons for navigating menus and battle options. You can scroll through you bag pockets and choose what you need. During battle, the buttons are big enough to just use your fingers, with no need to break out the stylus. The new device in this game, called the Poketech, starts off as just a watch but is a great addition. It adds more and more things as you go along. It uses the bottoms screen for its feature such as a Pokemon happiness meter, item-finder, and a step counter. There are roughly 20 different "applications" that get added to the Poketech. Also, breeding in this game is fun. Pokemon may seem "kiddy", but it is a deep strategic RPG. You must take the right type of Pokemon with you to each gym. Also, there are the contests, the Battle Tower and berry collecting.

Replay
With so much to do, you could easily log over 100 hours in this game. You can even use all the Game Boy Advance carts (Ruby, Sapphire, Emerald, Leaf Green and Fire Red) and catch even more Pokemon in the newly added Pal Park. You can trade and battle with WiFi. You can chat and draw with other oppenents. You can also go digging underground for fossils or different stones. There's breeding and the Pokemon contests. There is just so much to do you will always want to log on and find a battle.

This is the beginning of the DS's Pokemon run.
Review Page Hits: 0 today (510 total)
mediahook