Taking a step in the right direction, Prof. Layton shows us that puzzle games don't all have to be filled with jewels or rotating blocks. 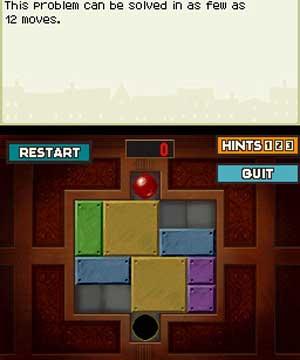 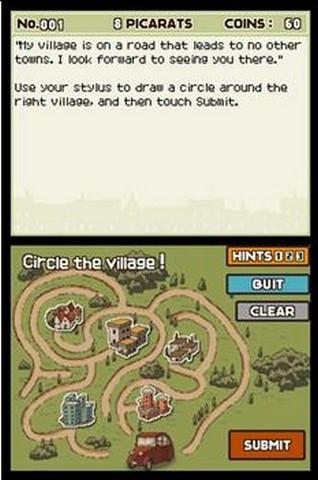 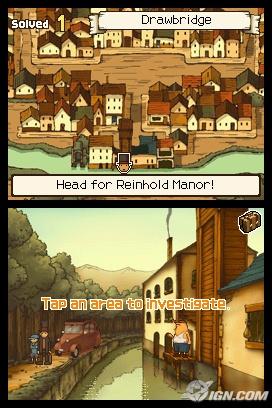 Truly a great time-consumer, but not only meant for that purpose.

Early skepticism based on the kiddy nature of this game had made it difficult for me to try this. I was originally looking to get my hands on it just to have, because I had heard that it was starting to get difficult to find. I'm not so sure about that now, but, regardless, I figured I'd start a save file on here while I had it.

I started it up, and after a little explanation of just what was going on in this crazy town, I was immediately solving puzzles! Nothing too crazy at first, I figured this game was going to be a snap.

MAN, was I wrong.

I'm not one to normally use help on games from the internet, but for some of these, without spending a crazy amount of time on them, I had to look up something. There isn't really much to say about the game itself, as most of the game consists of puzzles, but all of the puzzles are really fun.

For anyone who hasn't played this though, I will tell you that there are a lot of puzzles in this game that will make you say "God, I'm REALLY REALLY stupid for not having thought of that before.", after you solve them.

The music gets kind of repetitive, but you'll probably be humming through it while twisting your brain into knots solving stuff, and you'll be so distracted thinking, you won't really even notice.

As mentioned already, the gameplay is fun, and while it's wildly addicting, it tends to get tedious if you play it too much in one sitting. It's a good game to play while waiting for something, taking it one or two puzzles at a time, which only doesn't help you understand the back story as well.

All in all, this game is totally worth the retail price, (and a great value for less than that) and should be played by anyone who loves intricate thinking. The puzzles are definitely challenging enough.
Review Page Hits: 1 today (345 total)
mediahook