Become the ultimate Bio-Enhanced Super Soldier, as you use your powers to try to stop Civil War from tearing a country apart. 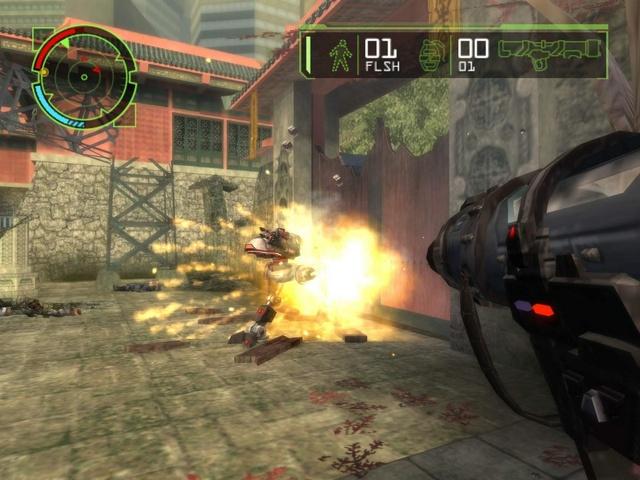 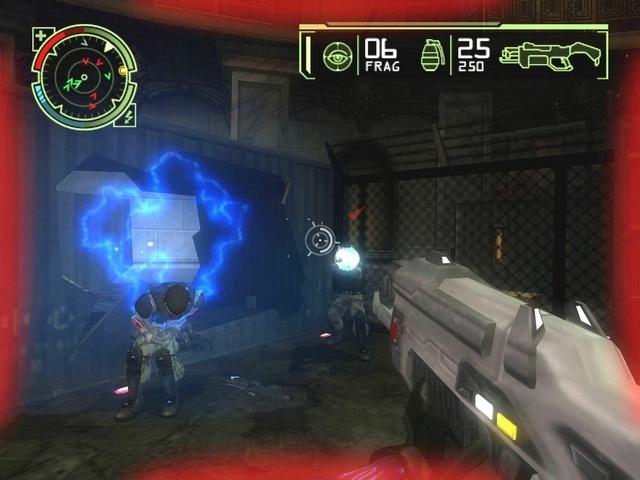 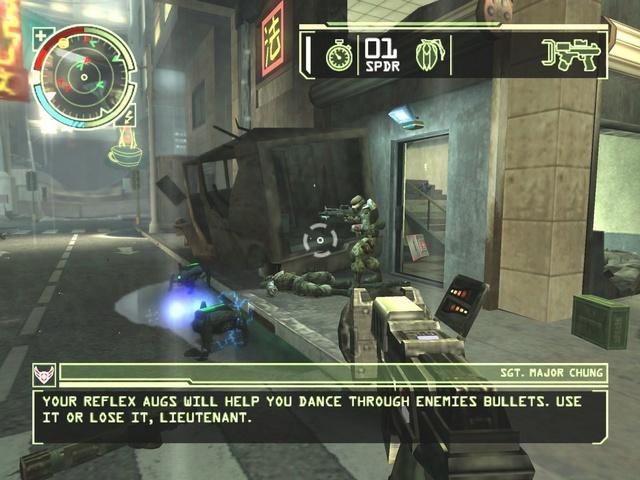 Project: Snowblind came out relatively unnoticed. What once was going to be a continuation of the Deus Ex franchise, Eidos decided to scrap that idea and create a totally unique first-person shooter. Originally dubbed "Project" Snowblind by the developers (as in, "A project named 'Snowblind.' "), an indication that the title was still under work, the name eventually stuck. Project: Snowblind is the latest game from Crystal Dynamics, the team responsible for The Legacy of Kain series and the upcoming Tomb Raider game.

Snowblind is a futuristic first-person shooter set in late 21st century Hong Kong. A country is under civil war, and the Republic, your enemies, are planning to use a device that can wipe out an entire city. Without giving away too much, that's all I will mention. You play as Nathan Frost, a soldier who finds himself mortally hurt in the opening scene, and thus is equipped with special Bio-Enhanced powers to help him stop the Republic forces. Sounds like a killer story right?

Not really. It's very dull and uninspired, to a certain point. After you find out what exactly Project: Snowblind is, you will probably lose interest in the story and instead just want to focus entirely on the action. The problem is, you find out what Project: Snowblind is after you complete the first level, so the entire story from then on just seems to drag everything else down. Nothing in the story is new or surprising, and it occassionally leaves you clueless as to what just happened.

The best feature the game offers are Nathan Frost's Bio-Enhanced powers. Throughout the game, you will be able to learn different abilities to help you during battles. From the get-go you are equipped with two powers, a Vision Sensor, which lets you spot enemies, and a Motion Reflex Sensor, which lets you slow down time. Any of these special abilities can be used at any given moment, if you have enough Bio energy. Through the course of the game, you will learn about seven different abilities, all ranging from Ballistic Shielding to Invincibility, making you decide which ability will help you get through the task easier. But each move requires a certain amount of Bio energy, so it takes careful planning to know which ability and when to use it. Also added to the game is something called the "Snowblind" effect. Your character has one deadly curse, EMP, meaning electronic devices. Whenever an enemy uses any lasers, or electronic equipment on you, the entire screen will turn white, creating the Snowblind effect. Very neat once it occurs.

Adding to the already complex battle system is the option to have every weapon in the game have an alternate, and quite possible more powerful, fire. Each weapon has its own unique specialty. The Carbine is used for rapid-fire shots, while the H.E.R.F. gunfires energy bolts that zap the health out of nearby enemies. But with the alternate fire, the Carbine will turn into a grenade launcher, and the H.E.R.F turns into a sticky bomb. The amount of destruction you cause is up to you, but with over 15 weapons, each with an alternate fire, there are over two dozen different ways to destroy the enemy. So get to it!

With all of this complex array of weapons and abilities, you are probably thinking that the controls are pretty clunky and not well organized. Think again. The controls are slickly smooth and well organized. Pressing left on the D Pad chooses the Bio-Enhanced ability to want to use, while pressing right will choose your sub-weapons, such as grenades. Up and down on the D Pad cycles through your weapons, and pressing the White button twice will select your two most recently used weapons, perfect for intense fighting when you don't have time to cycle.

There are times in the game when I thought I was playing Halo 2. Not because of the gameplay, but mainly because of the visuals. Snowblind looks absolutely gorgeous. Everything is extremely detailed, including the walls in broken down buildings, and the glowing eyes of the enemies. Never once was there any trace of slowdown or glitchy shooting, as everything ran smoothly and lag-free for the entire campaign. The most notable visual effects come in the form of firepower, where the weapons and character models looks amazing. Frost's arms and neck are constantly glowing due to the Bio-Enhancements, and when enemies get too close to a H.E.R.F sticky bomb, it's like the Fourth of July in winter.

With all of this amazing weapons cache, and graphical achievements, once has to wonder what went wrong in the AI department. The enemies are incredibly dumb. There are times when I would walk right in front of them, and they would do nothing until I shot my gun. Or there was one time where I came running at a bunch of them, equipped with my Ballistic Shielding and rocket launcher, and they just stood in the open doing nothing. The dumb AI, mixed with the repetitive level designs and the frequent save points, make Project: Snowblind feel a bit too easy.

The multiplayer is also somewhat of a letdown. It has online play, but the single player will keep you far more entertained. Numerous lag-outs in online games, boring scenarios, and the fact that everyone online is equal and has the same abilities is a drag. Eidos should have incorporated a way to make online play a little less balanced, and have everyone with different abilities once in a while. It literally is no fun to fight against a guy who has the same weapons, abilities and talent as you. Well, maybe not talent, but it sure seems that way. Stick to single player, because you'll have more fun.

Overall, Project: Snowblind redefines the FPS genre. The new Bio-Enhanced abilities, and the access to over 30 different weapon factors, you'll never want the game to end. Sure, the multiplayer isn't as top notch as single player, but that's forgivable.