Quadrun is a game that gets far too much hate, however respected it may be for its voice synthesis. 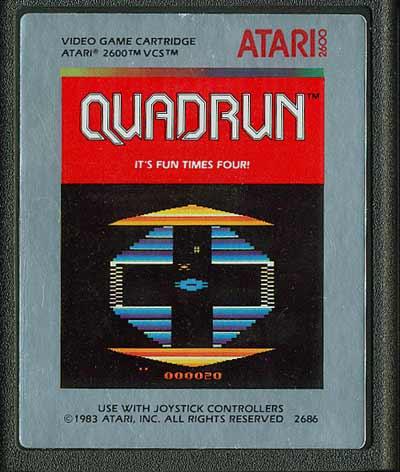 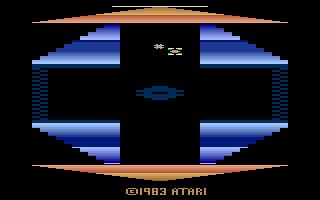 Quadrun is well known as one of the rarest Atari 2600 games, receiving a whopping mail-order-only print run of 10,000 carts. It is perhaps better known for being the first of two Atari 2600 games to feature voice synthesis. About there is where most people stop. They have a game worth hundreds of dollars, and it has a sweet feature to boot. Quadrun is a lot of fun to play in short bursts if people would just give it a chance, but many people seem to pass it up as a collectible. Hell, on the TwinGalaxies high score list, there are only two scores listed. Two scores! They couldn't even find a third person out of 10,000 owners to submit a score.

Quadrun is too often lumped in with the "bad rare games" of ages past.

Quadrun is an action/shooter game divided into four sectors. You're in the land of Quad attacking the Captors who have imprisoned the Runts. In the two vertical sectors, Captors will come out and attack your ship and after each is destroyed, a Runt will escape the prison in the center of the screen in one of the horizontal sectors. You have to catch the Runt before it hits the edge of the screen and dies. The twist is that you get three "phaser balls" and after each shot you have to go to the other side of the screen and catch your bullet. A hit from an enemy removes one of your phaser balls. You start with three and when you're out, the game's over.

There's only six stages so you have to go through the entire game with only three bullets, a reason the game is so difficult. To top it off, if you fail to kill a certain number of Captors or rescue a certain number of Runts, the game just instantly ends due to your failure. Why is this fun? Because you can beat this game in about 5-10 minutes, and likely will spend much less time losing. It's so challenging, but it's so short, that losing the game isn't a terrible deal. The catch-your-own-bullet mechanic works wonderfully, and I'm truly surprised nothing has ever come of it.

The downfalls of Quadrun come from it's controls mostly. You can instantly teleport to the opposite sector from you (top/bottom, left/right) but you must travel all the way to the edge of your sector to get to an adjacent sector. It's awkward to be able to move a greater distance faster than a shorter one, but once you play enough it grows on you.

Of course worth of mention is the game's fantastic voice synthesis which yells "Quadrun! Quadrun! Quadrun!" at the beginning of each wave. It sounds quite distinct and is absolutely a technical achievement of the 2600. Unfortunately... the other sounds in the game aren't so great, even by 2600 standards. Many of the sound effects are simply ear-splitting. There are few of those neutral bleeps and bloops you're used to from 2600 games. It's like Steve Woita wanted to hurt our ears.

Colorful. Of course Quadrun is a 2600 game so not much can be expected here. Each level takes place is a sort of triple plus sign that changes color constantly. The gradient effects are used well and all the motion is quite fluid. All the different Captors are distinct and have their own animations and movement patterns, and since they don't really represent everything, the game doesn't lose anything from being limited by the 2600's graphics. Not the best looking game, but very nice in it's simplicity.

Don't spend $500 to play Quadrun, but you can pick up an Atari Flashback 2 to play it. It's a 2600 game worth playing not only for it's historical value but also because it's pretty damn fun, especially in group settings where you can piss everyone off with the sounds. It's difficult, but too short to get frustrated with. The game doesn't even loop, it's literally 10 minutes long and the game ends, so if you're looking for a rather fun, quick action/shooter, I would recommend Quadrun even though many wouldn't!
Review Page Hits: 0 today (512 total)
mediahook