R-Type Delta has rekindled my love for next gen shooters, and is by far the best in the series up until this point. 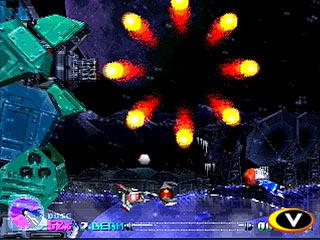 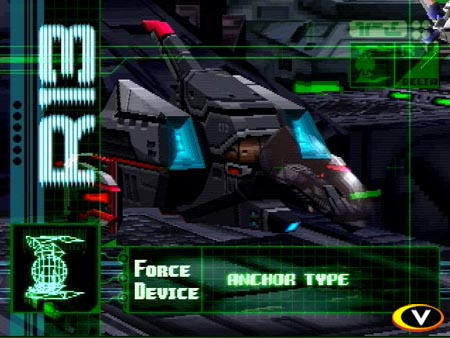 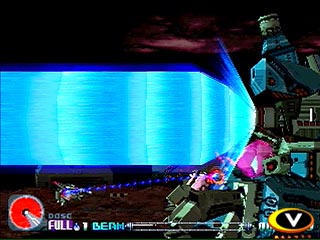 I have never been very fond of the R-Type series (although I've only played the first one) because of the INSANE difficulty level.

Anyways, I heard that this R-Type was a good representation of the 3D leap for shooting games on the next gen consoles, so I decided to pick it up when I found it for $12.00 at Gamestop. Here are my impressions:

Graphics: Graphics are a MAJOR aspect to the shooting game genre. "Eye-candy" as it's called can make or break a shooter, and R-type Delta is a prime example of excellent graphics contributing to the overall quality of the game. The graphics are a mix of 3D/2D elements on a 2D horizontal plane similar to Klonoa, although not as much rotation of the backgrounds. The polygonal textured ships and environments are fairly basic for a 1997
PlayStation game, yet get the job done very well. The major praise I have about the graphics is the detail put into the particle effects. You will see water splash up when you shoot above/near it, ship pieces scatter across the screen as you shatter the enemy to pieces, and laser fragments bounce off walls in gloriously bright and vibrant colors. Speaking of colors, this game possesses some lovely, bright colored sprite bullets from your ship as well as your enemies' ships, that offset the rather bland texture colors on the backgrounds. All in all, the graphics are quite impressive, especially for an older PSOne game.

Sound: The sounds in this game are very impressive, consisting of typical shooter-style techno beats and even some symphonic boss music. I especially enjoyed the cool "muffling" of the music as you went underwater, which added a certain "ah, that's so cool" effect. Sound effects in the game are also done very well. From squealing bionic enemies to the ricochet of your lasers off the walls, there really isn't much more to be desired.

Game Play: R-Type games possess that ever-strange type of shooting experience in which the game doesn't focus on your ship. Instead, it focuses on a small orb which can be shot out from the front or rear of your ship and retrieved whenever desired. This play mechanic also holds true for R-Type Delta. You have 3 different ships to choose from, each of which has a different orb attack, and special charge-up attack. There are also 4 colored power-up balls which can be acquired and cause your orb to shoot its own shots when attached. Each orb powerup has different effects depending on your ship type. In addition to orb powerups, there are also missile power-ups which are pretty useless, though can help out when your orb is detached from your ship.

As with past R-Type games, this is a one-hit-you're-dead type of shooter. Not my favorite type, especially when you get sent back to a "save point" somewhere previous to where you died. In later levels this is very frustrating, especially when you keep dying and dying in one spot. Thankfully though, there is a speed adjustment function on your ship, which I usually keep around level 3 and sometimes 2 for easier dodging, allowing you to customize the speed at which you control your ship across the screen.

Enemies in this game are, for the most part, of the biomechanical type (as with a lot of shooters), and are fairly repetitive in the respect that their patterns are predictable and the same types of enemies show up on multiple levels. Yet, there are enough variations in enemy types that they don't become monotonous. Boss battles are fairly basic and consist of a weak area which can end a battle in a matter of seconds. I wasn't really impressed with the boss battles as they seemed rather bland and uninteresting (except for the alien "R-Type" recurring boss).

Controls: The controls in R-type Delta are very easy to learn and very easy to master. The ships all move smoothly (although I still think they are a bit too big and easy to hit things ) and you are even allowed to hit walls without dying This allows for quite a bit more maneuverability and less frustration. Overall, good controls.

Fun Factor: I really have been having a lot of fun with this game. I've played it through 3 times on easy, which took me about 3 hours to beat overall, and then tried normal and got wasted.

The game play is fairly addictive, yet there isn't a ton of replay value considering that there are only 3 different ships to choose from. In my opinion, there is really only 1 good ship, as the other 2 have pretty bad weapons systems/orb attacks. However, if you manage to get through the game with all 3 ships you are treated to 3 different (yet short) endings, which is pretty cool.

Overall: R-Type Delta is a very good horizontal shooter, especially for the PlayStation. It's fun, easy to learn, and full of everything one could want in a shooting game. There isn't too much slowdown during heated combat which I am glad, considering some of the TERRIBLE Saturn to PlayStation ports of recent years. I highly recommend buying this game and although the going rate is a bit more than what I paid it's still worth every penny!
Review Page Hits: 0 today (268 total)
mediahook