A familiar franchise to PlayStation Users the world round... 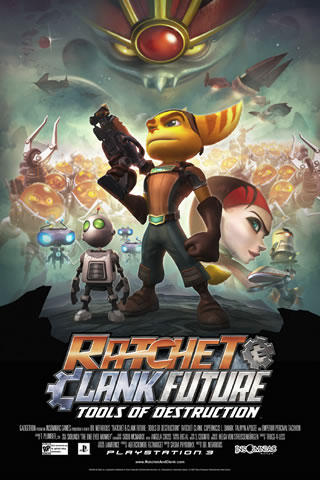 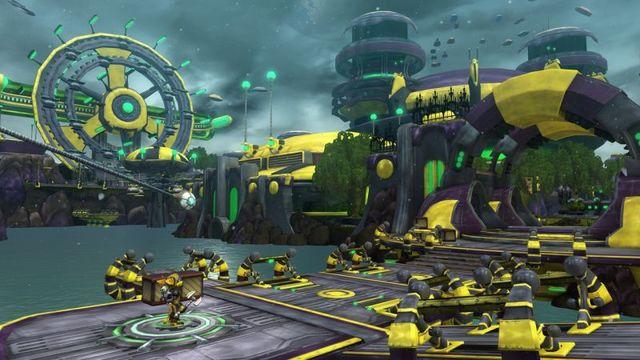 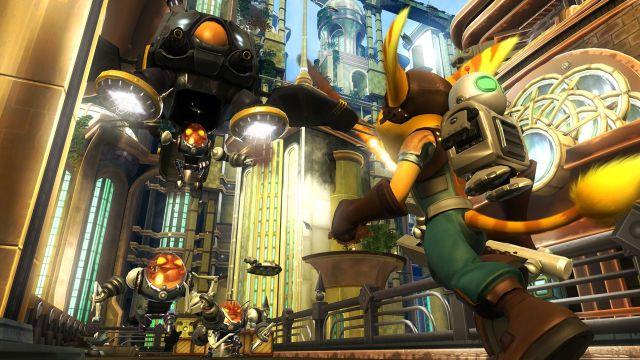 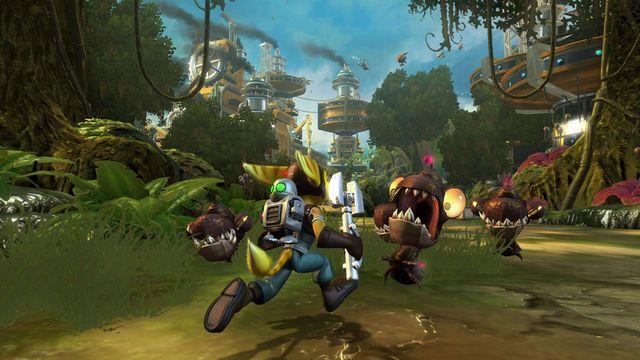 Here is one of Sony's old stand-by's, Ratchet and Clank.  This time coming to us with the "Future" tag for the PS3.  Because of Insomniac's past success with this franchise and the PS3's best launch title (Resistance) much was expected of this game.  For the most part it delivers, but falls short in not feeling different enough from past games in the series.

Again the focus is on a 3rd person shooting/platforming mix.  The core game play has been the same with the past few titles in the series.  While it's nothing new, that's not always a bad thing.  The controls are tight and work well, which is needed for any type of platforming game.  The shooting works great as well as you can hold the R2 trigger and have an over the shoulder view with aiming reticule and the ability to jump/strafe.  Because this game feels so similar to the last few anyone who has previously played the series will feel right at home and should be able to get through the game with little resistance.  That's a slight complaint on the game as it is somewhat easy, but there are some minor challenges here and there and I think it's just hard enough to keep it fun.

I mention in my first paragraph that this game doesn't feel different enough from past games in the series and I stand by that.  What has changed in the game, is that the world has become much more bright and vibrant with life crawling everywhere.  Every planet you go to you will see various creatures in the sky and tons of enemies on screen.  So, while this doesn't feel all that different from past Ratchet experiences, it does bring the past into the next generation on a much larger scale.  Not only will you get a ton of enemies on screen at once, but you will travel through worlds that are bigger and brighter than what the PS2 could pull off.  Also much improved is the sound.  On the first level alone you will get all of the sound effects from Ratchet's actions (jumping, shooting) with futuristic cars buzzing everywhere and the sound of hordes of enemies coming after you. This continues throughout the game as the ambient sound is just as prevalent as sound provided by all of your actions.

From a story telling standpoint, this remains one of the few titles that makes me laugh out loud, and not for the wrong reason.  The story revolves around Emperor Percival Tachyon whose people were once defeated by the "evil" Lombax race long, long ago.  Now that Tachyon's race is dominant he wants to erase any proof of Lombax history, including Ratchet himself.  This means that the game takes you to all corners of the galaxy to both stop Tachyon and understand your Lombax roots.  As I mention in the pro/cons, the story has some real laugh out loud moments and is good enough to keep you interested until the end, for your final, epic battle with Tachyon himself.  Veterans of this franchise have come to expect an interesting story, humor and excellent voice acting and we are treated to those things in spades with this title.

From a replay standpoint, this one depends on how much of a collector you are.  If you want to max out each weapon and get every different skin for Ratchet that you can, you will find a lot of time to spend here.  Weapons are purchased in classic Ratchet fashion, by grabbing as many bolts as possible.  Every stage has several "vending machines" that will dispense weapons, items, upgrades and armor.  The upgrading of weapons is done by collecting a substance called Raritarium.  The weapons are upgraded in a very similar fashion as the Grid from Final Fantasy XII.  There is a grid with options like more ammo, more damage or greater area of damage.  You can "max out" each weapon to make them more powerful with more ammo.  Also, the more you use a weapon, the higher it will level up.  This is much like an RPG game in that when weapons level up through use they become more powerful and adapt new features.  For instance, when the Plasma Beast Launcher (a gun that shoot gobs of plasma that turn into plasma monsters when an enemy is in close enough proximity) is leveled up, it turns into the Predator Beast Launcher.  This upgrades the weapon to launch plasma blobs that will be more active and seek out your foes.  One of the other items to collect is hidden gold bolts.  This is what is needed to unlock different skins for Ratchet and other goodies.  But if you are like me and have fun beating a game but not 100%'ing it, I don't see much reason to go back.   You should get 15-20 hours out of the story mode.

The last two things I want to touch on are this...  So far I have hated the implementation of SIXAXIS controls in the other PS3 games I have played.  This game uses it sparingly, but it uses the control better than any game before it.  You use it to fly (with Robo-Wings) and other various tasks throughout the story.  The second thing I want to touch on is the weapons and gadgets.  While many are familiar to Ratchet veterans, there are some great new additions that are very creative and fun to use.  I'll leave it at that and I will say this is a must play for PS3 owners.  It's great fun with a good story line.  Because I don't think it's something to play through 3 or 4 times, it's worth at least a rental.